Christ in icons of the baptism is identifiable just as he is in any painting or icon: his traditional bearded face, and a halo (nimbus) with a cross inscribed in it. Of course there are exceptions: the Arian baptistery in Ravenna featured a beardless Christ, and in the post-Renaissance West, halos fell out of popularity from time to time. But identifying the Son of God is never difficult in an image of the baptism. In the icons, the tall nude figure of Christ is central, with the energies of all the other elements converging toward him from all sides. From above him the hand reaches down, the dove and the light descend; below him the Jordan personification flees; from one side John the Baptist leans in and reaches out to touch him; and from the other side the angels bow reverently and extend the liturgical cloths. 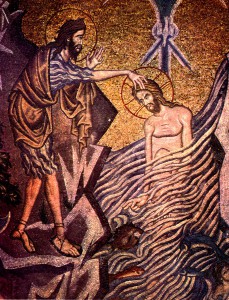 Christ is usually very naked in the icons, in contrast to the other characters surrounding him. In the trio of middle Byzantine monumental mosaics, the water of the Jordan obscures his body, drawing ribbons of blue, black, and white across his flesh. Christ appears to be standing behind a screen of water. Representing a human form half-submerged in water is a difficult artistic challenge in any medium, especially mosaic. In the later iconographic tradition, the water of the Jordan no longer intervenes visibly between the viewer and Christ’s body. Christ now stands “in front of” the screen of water, surrounded by it on all sides to be sure, but not obscured by it.

Abstractly considered, the form of Christ is a flesh-tone field on top of a blue field. His figure thus stands out, known to be underwater yet shown to be fully visible, and this has the effect of emphasizing his nakedness. Evdokimov refers to this as Christ’s “adamic nudity,” into which he voluntarily entered in order to give humanity the glorious vestments of paradise (Evdokimov, L’art, p. 246). The Son of God is represented as the Second Adam, whose kenotic obedience is heralded by the opening of the heavens which the first Adam had closed. Christ’s nudity is made thematic in a unique combination of text and image in the influential fourteenth-century illustrated text Meditations on the Life of Christ (translated by Isa Ragusa Princeton: Princeton University Press, 1961). The story leading up to the baptism tells of Christ’s long journey to the Jordan, and how he was not too proud to ask for money and food from people he encountered (In this, he is the perfect model for mendicant Franciscans). The accompanying illustrations include not only the standard baptism scene, but a previous scene depicting the moment before Christ enters the Jordan: His light-colored outer garment is in a heap beside him, and he is in the act of removing his darker inner garment. “Now see carefully how the Lord of majesty undressed like every other man and entered the Jordan, into the cold waters in this period of great cold, and all for love of us” (Meditations on the Life of Christ, p. 114). The stress on voluntary humility and poverty made explicit in this text is a good interpretation of the nudity of Christ in the traditional image. “He strips Himself, Who clothes the heavens with clouds” (“The Canon of the festival,” Ode 8, cited in Ouspensky, Meaning, p. 165). Finally, we should note the large number of exceptions to the rule of nudity. Both east and west, from at least the fifteenth century on, numerous images show Christ wearing a loose garment wrapped around his waist. 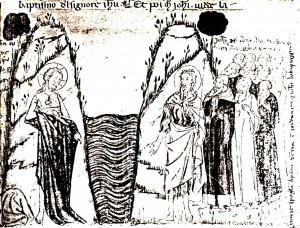 Christ’s posture in the classic icon is surprisingly active, considering that the story of the baptism is about what Christ received and underwent. Without ignoring Christ’s humble acceptance, or the fact that he was the one acted upon rather than the agent, the icon charges the figure of Christ with a powerful but calm activity. Ouspensky says “As a sign of the fact that here the initiative belongs to Him, that He, the Master, came to the servant and asked to be baptised, the Saviour is almost always represented as walking or making a movement towards John the Forerunner, at the same time bending His head beneath John’s arm” (Ouspensky, Meaning, p. 164). Christ does not receive passively, but actively: his active receptivity of the Father’s gift of the Spirit is made visible. Evdokimov notes the same theme: “To show his sovereign initiative, he is represented as striding, taking a step toward St. John: He goes freely, and bows his head” (Evdokomov, L’art, p. 246). We have already seen that the river itself can be interpreted as a black cave of death; Christ in this case steps down into the underworld, striding as it were from the baptism icon into the Anastasis icon and plundering hades. The downward motion is especially dramatic in the Hosios Loukas mosaic. The convention of painting a slab under Christ’s feet, with serpents writhing underneath it, is a further indication that the baptism icon can be understood as a parallel to the icon of the descent into hell. 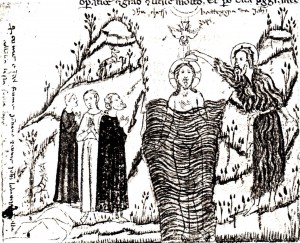 A further iconographic convention for highlighting Christ’s “sovereign initiative” in the event of the baptism is that of showing his right hand raised in a gesture of benediction. This very common element of the baptism icon seems to have emerged rather late; in neither of the Ravenna baptisteries is is present. Perhaps something analogous to a gesture of blessing can be understood in the relief on the Santa Maria Antigua sarcophagus, which shows Christ’s hand extended almost accidentally to the head of the sheep, transmitting the baptism with the Holy Spirit. Gradually the gesture of blessing becomes more clear in the icons, as Christ’s hand emerges from the water to indicate that in undergoing baptism he is in fact securing a blessing for us. In the middle Byzantine mosaics, the hand had to be rendered fairly conspicuous to be seen through the wavy lines of the water. In later images, where Christ is not behind the screen of the water, the gesture is allowed to become more subtle, less dramatic, and sometimes quite graceful and natural. Occasionally Christ’s gesture seems to be directed at the figure of Jordan personified. In this case there may be a reference to Christ blessing the waters of baptism specifically. 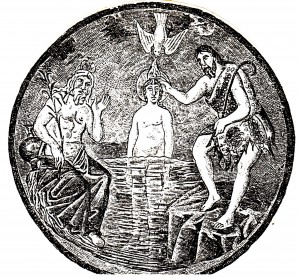 This classic posture of Christ (actively receptive, striding, signing a benediction) stands in marked contrast to later representations, mainly in the West, which follow another rule. In a great number of pictures, Christ has his hands folded together in front of his chest, to signify that he is devoutly at prayer. This portrayal may have disseminated through the conventions of illustration in the traditions of the Book of Hours, because it appears frequently in them (although not in the Biblia Pauperum, where Christ decisively gives a blessing). In the sixteenth century mosaic in St. Mark’s in Venice, Christ bows deeply toward John, holding out his clasped hands before him. The result of these prayerful gestures is to direct the viewer’s meditative attention toward the significance of the baptism for Jesus himself: What is he thinking, what is he praying about, how does he feel about what is happening? This single development transforms the central figure of the scene into a psychological study, and thus fundamentally alters the character of the icon. Perhaps the prayer gesture arose out of a desire to depict Christ as our model: he is demonstrating the prayerful posture and attitude that we ought to adopt when we are baptized. (One can imagine the embarassment of catechumens, having the wrong idea about imitating Christ, emerging from the baptismal waters offering a gesture of benediction to those around.) But whatever the intention, this simple alteration of gesture transposes the icon from the soteriological key into the psychological, and sentimentality becomes inevitable. The icon is no longer about the mystery of what Christ does to effect our salvation; it is now about the interior emotional states of this person who is undergoing baptism. 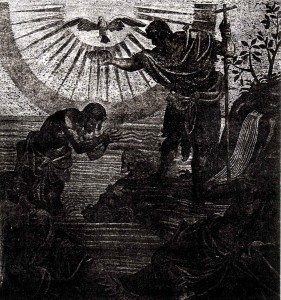 The situation soon worsens. For an artist who is consciously seeking to portray emotional states through mannered gestures, a simple pair of clasped hands is not enough. They must be passionately clasped (El Greco, Romeyn de Hooghe), or better yet unclasped and pressed to the breast (Poussin, Veronese). The bowed head must become the rolling surrender of a near-swoon (Orazio Genteleschi, perhaps Veronese). Christ may look meekly to the heavens, and motion with one hand tentatively back toward himself, touching a finger pensively to his heart as revelations stir in his soul (Giuseppe Bazzani). Tintoretto has Christ pensively reaching out to touch a little tree on the river bank. The artists summon all the available means to emphasize the inwardness of this experience the Savior is undergoing. This is a great distance from the classic icon tradition, in which Christ stands at the center of the composition and demonstrates that what he is doing he is doing for us and for our salvation. 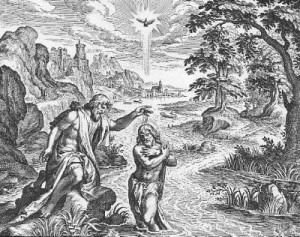