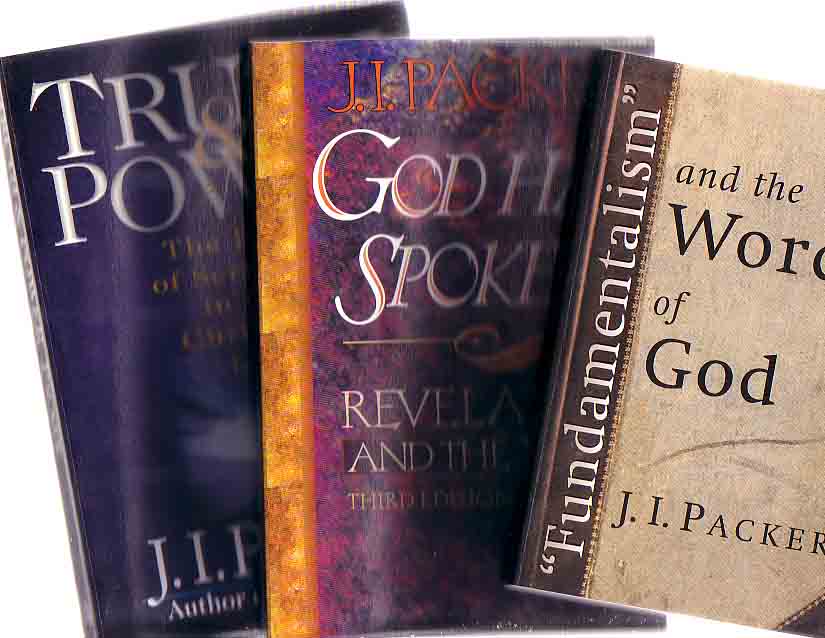 The best book on the doctrine of Scripture has never been written, and is by J.I. Packer.

Every time I teach on the doctrine of Scripture, I find myself reaching for a few J.I. Packer quotations that have coalesced in my memory to form a complete statement on bibliology. But when I reach for the book they’re in, I discover that they’re not in a book. They’re in three different books: ‘Fundamentalism’ and the Word of God (1958), God Has Spoken: Revelation and the Bible (1965, rev 2005), and Truth and Power: The Place of Scripture in the Christian Life (1996).

I don’t know how Packer or his publishers think of these books, but I think of them as his Scripture trilogy. They don’t exactly fit together tightly, and don’t seem to be part of a plan. There is a great deal of repetition among them. They were provoked by very different situations and aimed at different audiences. The ‘Fundamentalism’ book is feisty and contrarian, God Has Spoken was first written specifically for Anglicans, and Truth and Power is itself gathered up from disparate essays to make a book.

None of the three is perfect, but I shelve them together, and taken together these 500 pages cover most of what I need for a doctrine of Scripture. It’s also worth noting that Packer has written more than this on bibliology; the fugitive pieces are tracked by Paul R. House in the chapter “God has Spoken: The Primacy of Scripture in J.I. Packer’s Ministry,” in J.I. Packer and the Evangelical Future: The Impact of His Life and Thought.

A few favorite lines. From ‘Fundamentalism’ and the Word of God:

Accordingly, we shall contend that ‘Fundamentalism’ (in so far as consistent Evangelicalism is meant by this term) is in principle nothing but Christianity itself. (p. 22) (Packer goes on to give reasons why the word itself is not helpful in 1958, p. 30ff)

Poetry, according to Wordsworth, consists of emotion recollected in tranquility. Doctrine, according to Liberalism, has a precisely similar character. (p. 26)

One reason why Evangelicals are regarded by some as obscurantist is that, in fact, they sometimes are. (p. 36)

But if the term ‘Evangelicalism’ be given its historic meaning –fidelity to the doctrinal content of the gospel– then ‘liberal Evangelicalism’ is a contradiction in terms… (p. 38)

It is true that many sixteenth- and seventeenth-century theologians spoke of Scripture as ‘dictated by the Holy Ghost’; but all they meant by this was that the authors wrote word for word what God intended. The language of dictation was invoked to signify not the method or psychology of God’s guidance of them, but simply the fact and result of it; not the nature of their own mental processes, but the relation of what they wrote to the divine intention. (p. 78)

According to Scripture, God reveals Himself to men both by exercising power for them and by teaching truth to them. Indeed, the biblical position is that the mighty acts of God are not revelation to man at all, except in so far as they are accompanied by words of God to explain them. Leave man to guess God’s mind and purpose, and he will guess wrong; he can know it only by being told it. (p. 92)

From God Has Spoken:

Scripture… proves itself to be God’s authentic word by mediating God’s presence, power and personal address to us in and by its record of men’s knowledge of Him long ago. (p. 19)

God judges our pride by leaving us to the barrenness, hunger, and discontent which flow from our self-induced inability to hear His Word. (p. 26)

Revelation is a verbal activity. ‘God spoke.’ This is not a metaphor for some non-verbal mode of communication; the verb is being used as literally a any human words about God can ever be. (p. 63)

The fact we must face is that if there is no verbal revelation, there is no revelation at all, not even in the life, death, and resurrection of Jesus of Nazareth. (p. 73)

From Truth and Power:

The Bible is and always has been the book of the church, the source of its faith, thought, preaching, order, worship, praise, prayer and song. The inseparability is conscious; the church always has been, and when in its senses has tried to show itself to be, the church of the book, learning its identity, calling, mission, knowledge of God and knowledge of itself in and under God from the pages of Holy Writ. (p. 47)

Have you ever noticed that we use the phrase ‘Word of God’ in two sense? Sometimes we use it to mean the text of Scripture, as when we call printed Bibles copies of the Word of God. That is a natural usage, but not a strictly scriptural one. When the Bible uses ‘word of God’ in revelatory contexts, it means God’s message, either (as int he prophets) a particular occasional communication to some person or persons or (as in the New Testament) the gospel, God’s message to the world, or (as in Ps. 119) the total message of the Scriptures. (p. 105)

Suppose one resolves before God to make the quest for life and health and peace through Jesus Christ one’s priority and to that end to become a latter-day Bible moth. (p. 148)