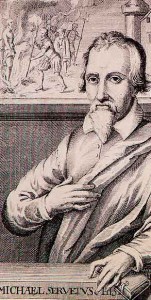 Today (September 29) is the birthday of Miguel Servet, better known as Michael Servetus (1511-1553), the Spanish theologian who forcefully denied the Trinity, and died for those convictions. Discussions of the execution of Servetus are easy enough to find, usually in connection with John Calvin’s involvement in the process. But on his birthday, let us look at him not as a footnote to Calvin, but on his own terms. What did this man teach that caused him to be hounded from country to country, pursued by the Catholic Inquisition and finally executed by Protestants?

The positive views of Servetus are hard to describe; he seemed to lack the gift of synthesis that would have led him to make a well-rounded, positive statement of doctrine. But he was great at denials. On the subject of the Trinity, he became convinced that Christianity was utterly wrong, had hold of the Bible from the wrong end altogether, and that he was the man to clear up the confusion. Try to see the world through Servetus’ eyes for a moment: Everywhere he looked, Servetus saw churches full of people mis-reading Scripture, blindly accepting medieval dogma, and turning the simple faith of Jesus into Platonic metaphysics. In that setting, it must have seemed to him that he could just throw a rock into a crowd and hit somebody who needed some bad ideas knocked out of them. So he started arguing. Here are some of his arguments, from his 1531 work “On the Errors of the Trinity.”

Servetus’ rhetorical moves are pretty standard: Portray his own ideas as simple Bible-reading, but the Trinitarian view as hopelessly metaphysical and abstract: Christ proclaimed even to women that he was the Messiah. “Pray consider how a little old woman can understand the metaphysical Son, when most heresiarchs, and those the most subtle, have stumbled at it.”

The Bible, according to Servetus, knows nothing about the actual essence of things; it stays at the level of appearances: “Scripture considers the manners of the appearances, and not the metaphysical Natures of the beings.”

Where did this metaphysical Trinity stuff come from, then? The Greeks. “This plague of philosophy was brought upon us by the Greeks; for they above all other men are most given to philosophy; and we, hanging upon their lips, have also become philosophers.”

And finally, the Trinity makes Christianity unacceptable to the other monotheists: “Furthermore, and worse than all this, how much this tradition of the Trinity has, alas! been a laughing-stock to the Mohammedans, only God knows. The Jews also shrink from giving adherence to this fancy of ours, and laugh at our foolishness about the Trinity; and on account of its blasphemies they do not believe that this is the Messiah who was promised in their law.”

Much of this is sophistry and special pleading, but to Servetus’ credit, the bulk of his work is taken up with verse-by-verse biblical argumentation, in which he reinterprets traditional Trinity texts in anti-Trinitarian ways. In fact, the most interesting thing to be gained from a reading of Servetus himself is the education it provides in Trinitarian exegesis. In several places of Scripture, Servetus does in fact score palpable hits against overblown interpretations, the kind of things that find the Trinity lurking in verses where it simply isn’t taught. That kind of critical inquiry is always bracing and ultimately helpful for the state of theological knowledge. But he also has to do some very nimble hermeneutical acrobatics to twist his way around the deity and preexistence of Christ in numerous passages. He has to construct massive interpretive schemas to shift the burden of proof, schemas which become at least as difficult as the Trinitarian categories themselves. It’s in this hand-to-hand grappling with Scripture, though, that Servetus rightly wanted the battle to be lost or won.

Perhaps Servetus’ most interesting argument has to do with the sheer unimaginableness of the Trinity. Not its irrationality, strictly speaking, but the fact that the mind cannot bring the entire doctrine before itself at once. Lamenting the plight of the Christian world in its acceptance of Trinitarianism, Servetus says:

It is clear, therefore, that we are Tritheists, and we have a threefold God: we have become Atheists, that is, men without any God. For as soon as we try to think about God,we are turned aside to three phantoms, so that no kind of unity remains in our conception. But what else is being without God but being unable to think about God, when there is always presented to our understanding a haunting kind of confusion of three beings, by which we are forever deluded into supposing that we are thinking about God.

The doctrine of the Trinity, according to Servetus, takes God away from us altogether, because it proposes to us a God which cannot be thought well enough to even be believed. It’s not just that Father, Son, and Spirit cannot exist; it’s that they cannot be thought at all:

Go ahead, try it, Servetus dares:

Dream as much as ever you will, fix your eyes on the mental images, and you will find that the Trinity is not to be understood without three such images; because it is necessary for one who thinks to observe these images. Indeed, you cherish a Quaternity in your mind, though you deny it in words. For you have four ideas, and the fourth is a mental image with respect to an Essence, because it is necessary in understanding the Essence to observe the mental images; and when you have seen these, you will comprehend clearly what I shall say elsewhere as to the formation of the notion. And even now, if you give heed, you can realize that your Trinity is nothing else than a kind of moving of forms in your imagination, which holds you deluded.

The “quaternity” charge is an unworthy argument easily dispatched with some elementary philosophical distinctions, but the force of Servetus’ argument lies in its appeal to the imagination. If Servetus is right, then the doctrine can only exist in a human mind as a kind of juggling of merely verbal propositions.

The Christian tradition, however, has always drawn a fundamentally different conclusion from the way the Father, Son, and Spirit interpenetrate in the unity of the divine essence. Here is a classic fourth-century spokesman, Gregory of Nazianzus:

No sooner do I conceive of the One than I am illumined by the Splendour of the Three; no sooner do I distinguish Them than I am carried back to the One. When I think of any One of the Three I think of Him as the Whole, and my eyes are filled, and the greater part of what I am thinking of escapes me. I cannot grasp the greatness of the Rest. When I contemplate the Three together, I see but one torch, and cannot divide or measure out the Unidivided Light.

The difference between Servetus’ confusion and Gregory’s adoration is not just in the tone of voice. They have made completely divergent decisions about the fact that the doctrine of the Trinity is mind-blowing.