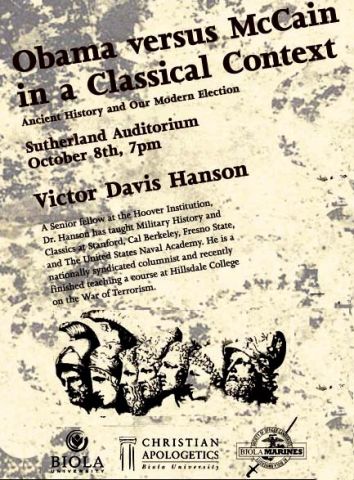 Following the news day by day can kind of beat up your mind, especially right now with the election, the war, and the financial crisis. These are all big stories that don’t fit daily updates very well. Every now and then it’s nice to hear from someone with a longer memory, who can provide some commentary on current events in greater perspective.

Victor Davis Hanson is that kind of commentator: He’s well informed and stays on top of current events, but everything in today’s headlines reminds him of something around the time of the Peloponnesian war. Hanson, a senior fellow at the Hoover Institution, has taught classics and history at several prestigious schools, mainly in his native California.

On Thursday, Oct. 8, 2008, Hanson spoke at Biola University on “The Election in Classical Context.” The lecture was mainly a student-organized event, planned and financed by the Biola Marines and the Associated Students (with some help from the Christian Apologetics program and the Torrey Honors Institute).

In an hour of lecture and a half-hour of questions and answers, Hanson wove together classical wisdom, the lessons of history, and his distinctive political philosophy. Though he made several comments about the current election and the state of play between the candidates as we move into the final weeks of the campaigns, he mainly explored what he called “other issues that reflect the fundamental differences in the way these candidates view the world.” So if you listen to the lecture this week, his description of the election will be relevant. But even if you listen to it a year after the fact, you’ll get vintage Hanson insight on American history and Western culture.

All 90 minutes are in one special Scriptorium Daily podcast, here.