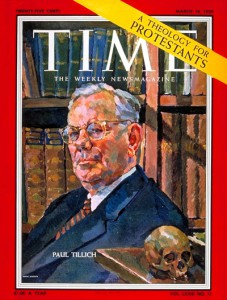 Today (October 22) is the day Paul Tillich (1886 – 1965) died. Tillich is one of America’s most famous theologians, but he’s co-owned by the Germans. He came to America in the 1930s after having spoken out decisively against Hitler. Tillich taught at Union Seminary, Harvard, and Chicago, and ruled the roost of academic theology in America with his existential philosophy, openness to other disciplines, and interpretations of cultural artifacts like modern art and architecture.

Tillich’s theology, as conservative students are duly warned, was not good. The list of outrageous things that he taught is pretty inflammatory; I will not list them here. His 3-volume Systematic Theology is a desert where the harsh sun of existentialism beats down on the dry sand of historicism. But there are oases within that desert, and just when I think I’m going to sell off all my Tillich books at cheap rates, I flip through them and find underlined sections in which he manages to say something helpful that nobody else has said. I’m not sure how he does it, but there are some topics that Tillich clarifies, and he often puts things powerfully.

As for his life, it was infamously licentious. He was a kind of rock-star academic, broadcasting his professorial charisma and harvesting dalliances and liaisons with adoring groupies. Many were sexual, some were long-term, and all were wounding to his hapless second wife, Hannah. After his death, Hannah wrote one of the strangest biographies ever written about a theologian, From Time to Time. It’s a terrible book, mingling Hannah’s own erotic travelogue with too much bad poetry and tedious imaginary dialogues among archetypal characters. Hannah Tillich may have had the soul of a symbolist poet or an expressionist painter, but she never disciplined herself to the craft of writing something readable. As a result, the book is like one of those very long Ingmar Bergman movies where everybody screams at each other in Swedish and then the camera does a close-up on a face that starts bleeding for no reason while Liv Ullman blows smoke at it and laughs. Yes, it’s that bad.

Suffering through decades with Paul and his homeless eros, Hannah eventually finds some sort of peace with their life together. She is at his side when he dies, offering to read the Bible to him but being waved off. After his death, she returns home and opens his locked drawers. “All the girls’ photos fell out, letters and poems, passionate appeal and disgust. Beside the drawers, which were supposed to contain his spiritual harvest, the books he had written and the unpublished manuscripts all lay in unprotected confusion. I was tempted to place between the sacred pages of his highly esteemed lifework those obscene signs of the real life that he had transformed into the gold of abstraction –King Midas of the spirit.”

By writing her postmortem report on their years together, Hannah did in fact interleave the life of Paul Tillich with his works. He died on this day in 1965. I don’t always think of his unworthy life when I think of Paul Tillich’s theological formulations. But today I do.