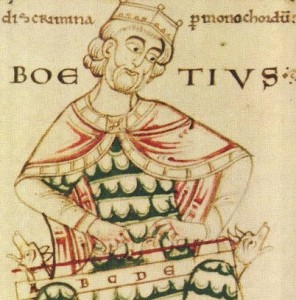 While explaining Boethius’ preface, Thomas says that Boethius “sets forth… the four causes of his work.” Those four causes are the famous four causes from Aristotle’s Physics, where the philosopher declares that “we do not have knowledge of a thing until we know its causes.” Those four Aristotelian causes are

Material: What a thing is made of

Formal: How a thing is shaped or configured

Efficient: What work is exerted to bring a thing about

Final: The end or purpose for which a thing is designed

Boethius does not actually declare in his preface that he is going to enumerate the four causes of his book. Though he knew his Aristotle very well, he does not employ the terminology of fourfold causation here. It is Aquinas, in explaining Boethius, who brings out the Aristotelian vocabulary for its explanatory value.

If you’ve read much late medieval or early modern theology, you’ve seen a lot of this kind of thing. From Thomas Aquinas all the way down into some of the Protestant scholastics of the seventeenth century, the four causes are standard tools for making important theological distinctions: the four causes of Scripture, of justification, of merit, of you name it. When I read these authors and see them reaching into the conceptual toolbox for the four causes, I sometimes heave a little sigh because I know what’s coming. And sometimes it’s pretty tedious. But at their best, theologians from this time period use the four causes to bring real understanding or make very sharp distinctions indeed, and they apply them in unpredictable ways.

First, the material cause: the subject matter is the doctrine of the Trinity, “the problem which,” Boethius says, “has been for so long a time the subject of my investigation.” No surprises there.

Second, the efficient cause Thomas breaks down into two sub-categories. The proximate or secondary efficient cause of the book is “the intellect of the author,” that is, the mind of Boethius which has done the work of causing the book. But when Boethius in his  preface describes the book as coming from “the feeble spark of my mind” which “the divine light has caused to enkindle,” Thomas takes this as a clue that there is a greater, primary, and ultimate cause behind the spark of the author’s mind.

If the mind of Boethius is rightly called a spark, then it has some little bit of the nature of fire. And fire, as Dionysius tells us, signifies certain properties of the divinity: “by reason of its subtlety, of its light, and also by reason of its place and motion.” All these things belong to God in the highest degree, “in whom exist the culmination of simplicity and of immateriality, perfect charity, almighty power, and highest majesty.” The mind of an angel may deserve to be called fiery in some middle sense, being closer to God. But the human mind can be called fiery “with only a more restricted meaning,” since “by union with a body its purity is lessened, its light is obscured, its power weakened, and its upward motion retarded.” So it’s a spark: even the mind of Boethius is not fiery but sparky. And it’s “rightly termed a spark” because it is both diminutive and derivative, it “would not be able to investigate the truth of this question unless light were cast upon it by the divine light.” Remember that according to Thomas, the Trinity is not a subject which can be known or explored without revelation. “Thus the divine light,” he concludes, “is the principal cause; but the human mind, a cause in the secondary order.”

That explanation is not one I would have predicted.

Third, the formal cause is the reasoned plan of the discourse, which Thomas says Boethius indicates under three headings: it’s (1) a procedure of argumentation adducing reasonable proofs rather than appeals to authority; it’s (2) written down rather than entrusted to memory, and it’s (3) delivered to a reader, “not after the manner of one imparting doctrine to another present to him, but as to one absent.”  Thomas makes a few more observations under this third head, because Boethius is adamant that he is offering his meditation on the Trinity to his friend Symmachus, whose judgement he trusts and whose criticism he desires. I think we would probably consider these comments by Thomas about the formal cause of Boethius’ De Trinitate to be comments about the genre of the work: we would describe it as a theological treatise that was not didactic but exploratory. In doing so, we would be (in Thomas’ terms) defining the treatise’s formal cause.

Fourth, the final cause, or purpose, of the book, is “knowledge of divine truth” in the reader.

This way of analyzing the book, of knowing its causes so we can have understanding of it, is not what we’re used to in modern academic discourse. And I left out the most medieval aspect of the whole thing, which is that Boethius declares he only wants to be judged by whether he has fruitfully developed some seed-thoughts he gathered from Augustine, and Thomas agrees that this is a good standard. So if you’re reading this blog post, you’re reading my report on Thomas’ commentary on Boethius’ development of ideas in Augustine’s understanding of Scripture. Welcome to the anti-Emersonian middle ages!

Thomas’ four-cause analysis of Boethius’ book occurs a few pages into the commentary. Before that analysis, Thomas has already given his own introduction, in which he describes “the matter, the mode, and the purpose” of the book. He has interesting things to say under those headings, which are not redundant. But it’s easy to recognize that a book’s “matter” is roughly the same as its material cause, its “mode” is roughly its formal cause, and its “purpose” is its final cause.

None of this quite fits with modern book review standards, but I’ve read plenty of book reviews that would have been improved by ditching modern conventions and instead exploring the four causes. I have a sense that these four-cause categories almost force you to join the author in service to the truth they were writing about.