If God’s glory falls in the middle of the cosmos, and no one’s there to hear it, does it make a sound?

This was the question I used this week to begin discussions on Jonathan Edward’s The End for Which God Created the World. Scripture is full of discussions of God’s glory. It is God’s glory that motivates his action to redeem and save (Is 48:11), as well as to punish and exile (Ez 28:22). It is the glory of God that is always forefront in Christ’s actions and motivation (Jn 7:18), and it is the end of redemption (Eph 1:6-14). Everything God does, he does for his glory.

But what exactly does it mean for God to act for the sake of his glory? Think about a perfect gem, the most beautiful diamond imaginable, and imagine it sitting in a cave for all eternity, beautiful and perfect and never beheld by a single soul. It is certainly great, but is it glorious? 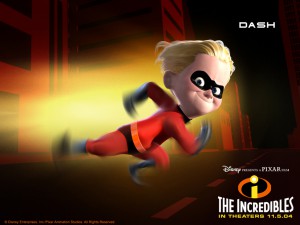 Or, as one of my students aptly suggested, think of Dash from Pixar’s The Incredibles. Now, Dash is fast. That’s his superpower, that’s the thing that makes him who he is. But what if Dash existed in a world with nothing to run on? Of course, that wouldn’t stop Dash from being fast, but it might stop him from acting fast.

When we think of a culture that is invested in glory (some place like Homer’s Greece), glory is all about the revelation, manifestation and appreciation of greatness. Achilles gets glory by going out and doing mighty acts of war. He is capable of greatness even while he’s sitting in time-out on the shore, but he only gets glory once he goes out and does what he’s capable of. And it is intrinsic to Achilles’ glory that his glorious acts are perceived and appreciated by his fellow soldiers.

Edwards argues that the end for which God created the world was his own glory. God always had greatness, but the creation of the world allowed him to manifest that greatness for the sake of his glory. Let’s go back to Dash for a moment. What if, in the world where Dash is fast but has nowhere to run, Dash creates a track so that he can be, or act on, the thing that he is? The track is an avenue for manifesting fastness, and Dash makes it so that he can do the fast acts he’s capable of. (Now, of course, this analogy is limited. If we think of running fast as the analogy for greatness, then it sounds like God isn’t great if he’s not “running”, but as long as we keep thinking about running as God manifesting his greatness in a particular context, I think we stay with Edwards.)

Now, what if that track became self-aware (go with me on this), and started thinking about its relationship to Dash? It might be that the track would start thinking to itself, “Dash needs me to be fast.” Or even, “I’m the reason Dash is fast.” Of course, the track would have it all wrong. The track exists for Dash’s speed, but Dash doesn’t need the track to be fast. He doesn’t even need this particular track in order to act fast. The track’s only reason for existing is to be a place where Dash can be fast, but the track doesn’t add a whit to what Dash is or what he is capable of.

This is the problem with the way some people think about the question, “Why did God create the world?” Well, it must be because he needed us, or because we add something to his existence. But Edwards argues that God created the world only because it is good for him to display his goodness.

And, of course, it’s good for us, too. Not only do we exist because God is displaying his goodness, but we are also drawn by his goodness towards him. Edwards ends his work with a beautiful image in which each of us is like a shooting star ascending continually towards greater joy and union with God. The world isn’t created for us, God created us for himself, to manifest his glory and appreciate his glory and to participate in his goodness more and more throughout all eternity. In the end, the world isn’t for us, both we and it are for God. And that’s a good thing.