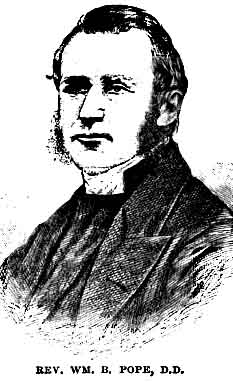 William Burt Pope (1822-1903) was a great British Methodist theologian of the nineteenth century. In fact, I am coming to believe that he was the greatest doctrinal theologian ever to take up the task of teaching Christian theology from the point of view of the Wesleyan revival movement. A few months ago I found his 3-volume Compendium of Christian Theology for sale at a used book store at a good price. I’ve been distantly aware for some time that Pope is one of the most reputable thinkers in the Arminian family, so I picked up the dilapidated old books and started thumbing around in the 1,500 pages to see what this fellow was all about.

What William Burt Pope was all about was teaching doctrine in a serious way. His understanding of the big picture of Christian theology made my head spin before I was very far into the first volume. In fact, starting on the first page, Pope admonishes his readers of the dignity and sanctity of the study of theology: “It is A DEO, DE DEO, IN DEUM: from God in its origin, concerning God in its substance, and it leads to God in all its issues.” With a meaning far more than just etymological, Pope declares of theology: “His NAME is in it.”

Hence every branch of this science is sacred. It is a temple which is filled with the presence of God. From its hidden sanctuary, into which no high priest taken from among men can enter, issues a light which leaves no part dark save where it is dark with excess of glory. Therefore all fit students are worshippers as well as students. … The remembrance of th is must exert its influence upon our spirit and temper in all our studies. Who shall ascend into the hill of the Lord? or who shall stand in His holy place? He that hath clean hands, and a pure heart.

Pope is so good at stating the large, main ideas of Christianity that it’s hard to summarize what is distinctive about his theology. Thomas Langford, in his book Practical Divinity, hazarded this summary: “The central idea in Pope’s thought was that of divine grace as effected in human life by the Holy Spirit.” If that just sounds like “mere Christianity” rather than an identifiable school of thought, Pope would not be upset by that characterization. He was trying to fill the office of a theological teacher, passing on what the church has always taught; and he wanted his work to be judged with questions like: Is it clear and memorable? Does it lead readers into a deeper understanding of Scripture? Is it a faithful re-statement of the great tradition of Christian thought? Does it spend the right number of pages on the most important things, putting less important items in subordinate places?

I’ve learned a lot from William Burt Pope’s Compendium this summer, and I’ll be quoting it from time to time here. Pope made many of the same decisions I have made in my own theological musings about what needs to be emphasized in order to bring out the long, clear lines of a consistently evangelical Christian theology. Part of my excitement about his work comes from the fact that he so often corroborates my own work, and encourages me that I’m on the right track. I don’t find his arguments persuasive in all areas, however, and I’m not sure I understand what he’s up to when he does things like attack the idea of “common grace” as a sub-Christian idea and wants to replace it with prevenient grace. But with William Burt Pope, the main things are always the plain things, and he works hard to ensure that the plain things remain the main things.

Langford says of Pope that there wasn’t much in his theology that couldn’t already be found in Wesley or the Methodist theologians Clarke and Watson. “The distinctive quality of Pope’s writing lay in his style of expression, his lucidity, and his completeness.” If Pope’s as great as I think he is, why has his fame dropped so precipitously? Why is he neglected and left unread? I suspect he was too good a theologian for the time he was born in. He produced a serious Methodist Christian theology at a time when the Methodist movement was trying to figure out a way to be less serious and less Christian. Langford hypothesizes that one of the reasons for the eclipse of Pope’s work is that Pope found his voice in the mid nineteenth century, but published in the later nineteenth century. Things had changed: Darwinism had come along in that time, and many theologians became convinced that Christianity had to be re-stated within a thoroughly evolutionary framework. The tide of historical criticism of the Bible was rising rapidly during these decades, and again the younger generation was certain that responsible theology had to take the assured results of the latest critics into account. Pope, for whatever reasons, serenely declined the invitation to take part in the panic and scramble that animated so much Victorian intellectual life. “His position was formed prior to the 1860s, the critical period for many of the issues, and although the Compendium was published in 1875-1876, he was not responsive to these new currents. Catholic in his range of sensitivity to traditional Christian positions, Pope was uncongenial toward contemporary developments…” He might have been clueless and out of touch. Or he might have taken the measure of these new developments and decided they just didn’t force themselves on the consideration of a theologian in the same way that the big central doctrines did: Trinity, incarnation, atonement.

What I’ve been wondering as I’ve been reading Pope is, how was this theological mind formed? How did he produce a Methodist theology that was more focused and self-confident than the rapidly-degenerating movement that it spoke for? How did he reconnect with the original impetus of the Wesleyan revival, situate it so sure-footedly in the great Christian tradition, and trace it all back to the Bible with such illuminating power? There is a good account of his career in an old book entitled Methodist Worthies (available on Google Books!), and here are some of the key moments in his theological formation.

1822: Born in Nova Scotia. The same year, his family moves to the West Indies as missionaries.

1846: Publishes a translation of Haupt’s commentary on First John. Pope was convinced that John’s epistles were a kind of summation and high point of biblical revelation.

1854: Publishes a translation of Rudolf Stier’s Words of the Lord Jesus, an erudite and meaty commentary. Stier pays close attention to each word, but thinks big thoughts as he does so. This is theological interpretation of Scripture at a high level of exegetical rigor.

1859: Publishes a translation of Ebrard’s commentary on First John.

1863: Publishes a translation of Dr. George Winer’s Confessions of Christendom, a survey of confessional theology in the different branches of the Christian churches or denominations. This book is a remarkable piece of scholarship comparing and contrasting a wide range of theological positions.

1869: Publishes “Discourses on the Kingdom and Reign of Christ.”

1871: Publishes “Discourse on the Person of Christ.”

1875: Publishes A Compendium of Christian Theology ; being Analytical Outlines of a Course of Theological Study, Biblical, Dogmatic, Historical. “A spirit of enquiry was aroused; it was evident that a master-mind had arisen in the theological world, with a firm grasp of the subject in hand,” notes Methodist Worthies.

1880: Publishes “Discourses on the Lordship of the Incarnate Redeemer.”

1884: Publishes “A Higher Catechism of Theology,” a remarkable work of condensing his systematic grasp of theology down to about 300 pages in crisp question-and-answer format. More about this book another time!