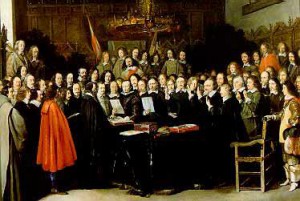 Today (October 24) in 1648 the Treaty of Münster was signed. Together with the signing of an earlier treaty, this event is known as the Peace of Westphalia. It brought a resolution to the terrible conflicts we call the “wars of religion,” chiefly the Thirty Years’ War.

Peace is good and war is bad –the Thirty Years’ War was especially bad– so it’s hard to speak ill of the Peace of Westphalia. But moderns have drawn a few unwarranted lessons from these events of the seventeenth century. The main moral of the story, we are told, is that religious people like to kill each other over religion, and if you let their ideas be taken seriously in public, there will be a bloodbath. You have to admit, that’s a plausible story. The way Catholic and Protestant countries tore into each other all over Europe was a miserable spectacle.

Which leads to the other moral we’re taught to draw from the wars of religion and the Peace of Westphalia: That the rise of Protestantism let the genie of dissent out of the bottle, and he turned out to be a genie capable of taking on a thousand forms at once, all fighting each other.

The second moral is less important and more easily dispatched, so let’s take it first. The wars of religion were not caused by theology, neither by the Protestant Reformation nor the Catholic Counter-Reformation. The theology, and the church divisions, were an occasion and an excuse for cultural, political, and ethnic fights that were ready to happen anyway. C.S. Lewis talks about how the Reformation as a theological movement degenerated into a “tragic farce” when it “attracted the fatal attention both of government and the mob.” Here’s the whole passage, from Lewis’ best but least-read book:

…that whole tragic farce which we call this history of the Reformation. The theological questions really at issue have no significance except on a certain level, a high level, of the spiritual life; they could have been fruitfully debated only between mature and saintly disputants in close privacy and at boundless leisure. Under those conditions formulae might possibly have been found which did justice to the Protestant –I had almost said the Pauline– assertions without compromising other elements of the Christian faith. In fact, however, these questions were raised at a moment when they immediately became embittered and entangled with a whole complex of matters theologically irrelevant, and therefore attracted the fatal attention both of government and the mob. When once this had happened, Europe’s chance to come through unscathed was lost. It was as if men were set to conduct a metaphysical argument at a fair, in competition or (worse still) forced collaboration with the cheapjacks or the round-abouts, under the eyes of an armed and vigilant police forced who frequently changed sides.

But the prior charge, that religion in general is too dangerous a thing to have a place among the res publicae, the public things of our lives together, is harder to attack. It has become the conventional wisdom, the new common sense. But a number of people have pointed out the errors lurking in this conclusion. William T. Cavanaugh’s 1995 essay “A Fire Strong Enough to Consume the House: The Wars of Religion and the Rise of the State” scores some great points against it. It’s a brilliant essay, one that makes me dizzy from alternately nodding my head yes with gusto, and shaking it no just as vigorously.

But he points out two simple facts: First, there was somebody who stood to benefit greatly from playing policeman in the religious wars, and that was the state, the regional political entities finding new self-confidence in the breakdown of the Holy Roman Empire. And Cavanaugh’s second point emerges as he makes the first:

Liberal theorists … would have us believe that the State stepped in like a scolding schoolteacher on the playground of doctrinal dispute to put fanatical religionists in their proper place. Self-righteous clucking about the dangers of public faith, however, ignores the fact that transfer of ultimate loyalty to the nation-state has only increased the scope of modern warfare.

That is, things haven’t exactly gotten less bloody or factious since the state stepped in, have they? The religious factions agreed to hand all their swords over to the state, and now the state has all the swords. But this was not an argument about sword control (“Swords Don’t Kill People, People Kill People”). It’s an argument about who has the right to use lethal force, the right to demand loyalty to the point of death, the right to invade and re-draw boundaries. There’s only been one answer since the seventeenth century, and that’s the regional state. What people do with God was given the name “religion,” and was assigned an internal, private sphere.

So happy birthday to the Peace of Westphalia. It stopped one war, made the rest of them possible, and turned the world inside out.