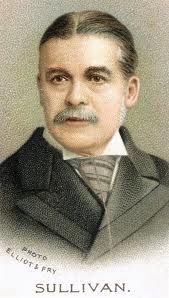 His name has to be paired with Gilbert before most people will recognize him, because he is best known as the composer of the music for those Gilbert and Sullivan comic operas like Mikado, H. M. S. Pinafore, and Pirates of Penzance. But Sir Arthur Seymour Sullivan (born this day, May 13, 1842; died 1900) also wrote some serious music with and without Gilbert. And among the works of Arthur Sullivan as a sacred composer are some songs everybody knows: It Came Upon a Midnight Clear, Lead Kindly Light, and Onward Christian Soldiers.

That last one, with lyrics by Sabine Baring-Gould, was a song Dwight Moody wouldn’t allow at his meetings. He claimed it was too filled with “vain boasting,” and it made him snort: “A fine lot of soldiers we are!”

But you’ll be humming it all day. Thanks, Arthur Sullivan.