Does God have a soul? That’s a weird question. 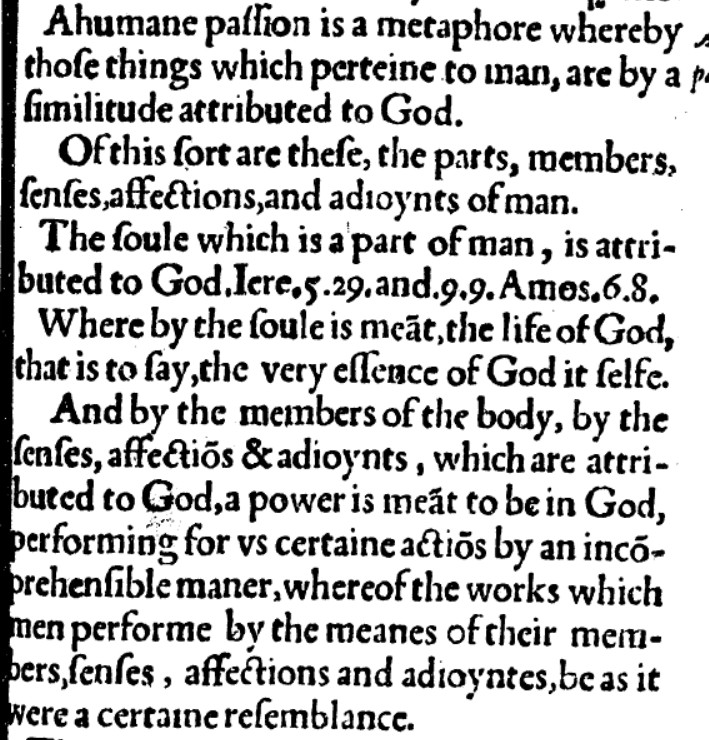 But here’s a tidy answer, from Amandus Polanus’ (1561-1610) Substance of Christian Religion. See the screencap for quaint spellings & suchelike.

Yes, God has a soul. “By the soul is meant the life of God, that is to say, the very essence of God itself.”

That way of putting it makes explicit the fact that we are speaking analogously when we talk about God having a soul. Or, better, God is speaking analogously when he describes himself as having a soul, which he does in Jeremiah 5:29, Jer 9:9, and Amos 6:8. “Shall not my soul be avenged?” Click through to see these passages at the incredibly helpful stepbible.org, in this case pre-set to display the Hebrew text (nephesh), the LXX (psuche), the Vulgate (anima), and the KJV (soul). Modern translations tend to opt for “self,” which works too, if you don’t read too much psychology into it.

When God talks about having a soul, he is using “a metaphor whereby those things which pertain to man, are by a similitude attributed to God.” Polanus lists many types of things which we experience in human life, and attribute in this way to God: human parts, members, senses, affections, and “adioynts” (adjuncts?). So God has a soul, and the reason he would say so is the same reason he would say he has a hand, a nose, a heart, and so on. This is how God gives an account in human terms of what he is.

I don’t think Polanus draws out this implication, but saying that God has a divine soul can also be clarifying in discussions of christology. Soul apparently goes along with nature, so that in the being of God there is the divine soul, and to have a true human nature is to have one human soul. In this way of talking, there would be one soul in the Trinity and two souls in the incarnation (contra Apollinarius). Again, it’s a strange way of talking, but it can be clarifying if it helps to reinforce the two-natures parallelism of christological discourse (a human soul and a divine soul), and also for alerting us to the analogical character of the language: God is like us in having a soul, but God’s soul is not like our soul.