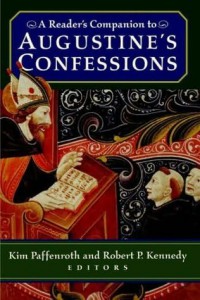 Augustine’s Confessons is a uniquely rich book, so deeply felt and so carefully constructed that it beggars description. It exhausts the critical resources of centuries of commentators, and keeps on drawing new admirers who find new things there.

Most well-constructed books have one central section, whether it comes early or late, whether it’s a turning-point, a climax, or a denouement. More complex books have multiple competing centers, but only a literary master can write such a book without harassing and confusing the audience. How many centers does Confessions have? Well, how many chapters are there?

The answer is thirteen. Confessions is made up of thirteen books, and each one of those books is a magnetic center of forces that draw meaning from all the other parts. Every single book is a viable candidate for the central book. A perceptive reader could make a compelling case for each one.

In fact, perceptive readers have already done so. In A Reader’s Companion to Augustine’s Confessions, thirteen scholars are each assigned one book of the Confessions, with the task of arguing that it is the central chapter. And with one or two exceptions, the authors all succeed. I was, at least temporarily, won over by eleven of the authors, and am left feeling enriched but perplexed: They can’t all be central!

But which candidate could be eliminated? Charles Mathewes shows that Book One is an intensely self-aware reflection on beginnings, with an awareness that to begin is know oneself as “being begun” by something higher. John Cavadini traces the biblical allusions of Book Two to show how Augustine sets up his story as the story of humanity itself. Either of those themes could accurately be said to be the theme of the entire Confessions. Todd Breyfogle traces the way Book Three recounts Augustine’s desire being drawn into the wrong paths even as God planned his return: another possible statement of the meaning of the whole book! And on it goes, from likely candidates (Book Nine with its vision in Ostia; the long Book Ten with its real-time confession in the presence of God now) to unlikely candidates (Book Five as the central section of the autobiographical series One through Nine; Book Twelve with its apparent digression on biblical interpretation that retroactively transposes the whole work into a hermeneutical key). The only real clunker in the volume is the chapter about Book Eight, which is so off-task that I thought it might be an elaborate academic joke, or might have been intentionally weakened because it would have been just too easy to show how Augustine’s conversion is the center of the Confessions. So their author didn’t bother trying.

A Reader’s Companion is a good collection, based on a great idea, provoked by a superlatively excellent book, the inexhaustible classic of Christian thought that is Augustine’s Confessions.