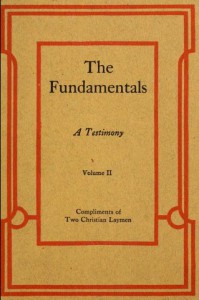 One of the most important ventures in religious publishing and theological education in the twentieth century was The Fundamentals, an interdenominational publication that marked the conservative evangelical revolt against modernism in the early years of the century. Published serially in twelve volumes over the course of five years, they were sent free of charge to Christian workers around the world. The 1917 republication of The Fundamentals, under the editorial hand of R. A. Torrey, consisted of 90 essays printed in 4 volumes. Torrey put the essays into an orderly sequence in this edition, making The Fundamentals a popular synthesis of conservative biblical scholarship, theology, and apologetics.

The Fundamentals have sometimes been criticized for a lack of theological breadth, as they focused on the handful of doctrines that were under attack by modernism. In ninety chapters on a range of disputed issues, for example, there is not a chapter on the Trinity. Uncharitable interpreters of The Fundamentals (and there have been hardly any sympathetic scholarly interpretations in recent decades) have taken this conspicuous absence as evidence of the narrowness and imbalance of The Fundamentals project. But the uncharitable reading is too facile to fit the case. Lacking a Trinity chapter, The Fundamentals nevertheless exhibit a robust evangelical trinitarianism precisely at this point of the doctrine of salvation by adoption. This is best exemplified in Charles Erdman’s essay “The Holy Spirit and the Sons of God.”

Erdman begins his essay by pointing out that “due importance has not been given to the peculiar characteristic of the Pentecost gift in its relation to the sonship of believers.” After describing the “sonship in glory” which Jesus enjoyed, Erdman goes on to say that “when the disciples were baptized with the Spirit on the Day of Pentecost they were not only endued with ministering power, but they also then entered into the experience of sonship.” Working out that experience of sonship in the believers, according to Erdman, was the proper task of the Holy Spirit for at least two trinitarian reasons.

First, the Holy Spirit forms believers into sons because his work is based on the completed work of Christ the Son: “through the heaven descended Spirit the sons of God are forever united with the heaven ascended, glorified Son of God.”

Second, the Spirit forms believers into sons because he always works towards that perfect sonship which he knows to belong to Christ: “the sum of all His mission is to perfect in saints the good work He began, and He molds it all according to this reality of a high and holy sonship.” The perfection of Christ “was pre eminently the life of a Son of God and not only of a righteous man; of a Son ever rejoicing before the Father, His whole being filled with filial love and obedience, peace and joy.”

Erdman is not the only Fundamentals contributor who communicates a powerful, understated, but fully practical trinitarian theology. R.A. Torrey’s chapter on “The Personality and Deity of the Holy Spirit” is vintage Torrey, and Philip Mauro’s chapter “Life in the Word” is a great witness to the latent trinitarianism in the evangelical doctrine of Scripture.

But second only to Erdman is Robert Speer’s chapter on the fatherhood of God. In the context of anti-modernist Fundamentals project, Speer’s main concern is to refute the theologically liberal notion that everybody is a child of God, and that this universal fatherhood can be known from general revelation. The main thrust can be seen in his title, “God in Christ the Only Revelation of the Fatherhood of God.” But Speer’s negative point quickly gives way to the positive one: In Christ, God is revealed as Father, and Christians ought to act like it. Prayer to God as Father is a trinitarian encounter. Properly understood (that is, as revealed in Christ), it is what defines Christian prayer as Christian. According to Speer, this changes everything about prayer:

I suspect that prayer has been just a sham to many of us, or a thing that we have done because other people told us it was the thing to do. We never got anything out of it; it never meant anything to us. We might just as well have talked to stone walls as to pray the way we have prayed. We went out and said, “God,” and we might just as well have said, “hills,” or “mountains,” or “trees,” or anything else. Why have we not gone into the school of Christ and learned there, alike from His practice and His doctrine, what real prayer is and how a man can do it. You cannot find a single prayer of Christ addressed to God, not one; nor can you find a single prayer of Christ’s in which He so much as mentions God.

On the contrary, Jesus taught us, “When you pray, say ‘Father.'”

The editors of The Fundamentals had 90 chapters to work with, and failed to devote one of them to the doctrine of the Trinity. Nevertheless, the project was infused with a thriving trinitarianism that came through at all the right points. 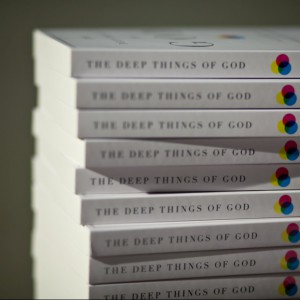 (This is a lightly-revised excerpt from my book The Deep Things of God: How the Trinity Changes Everything, available now from Crossway.)