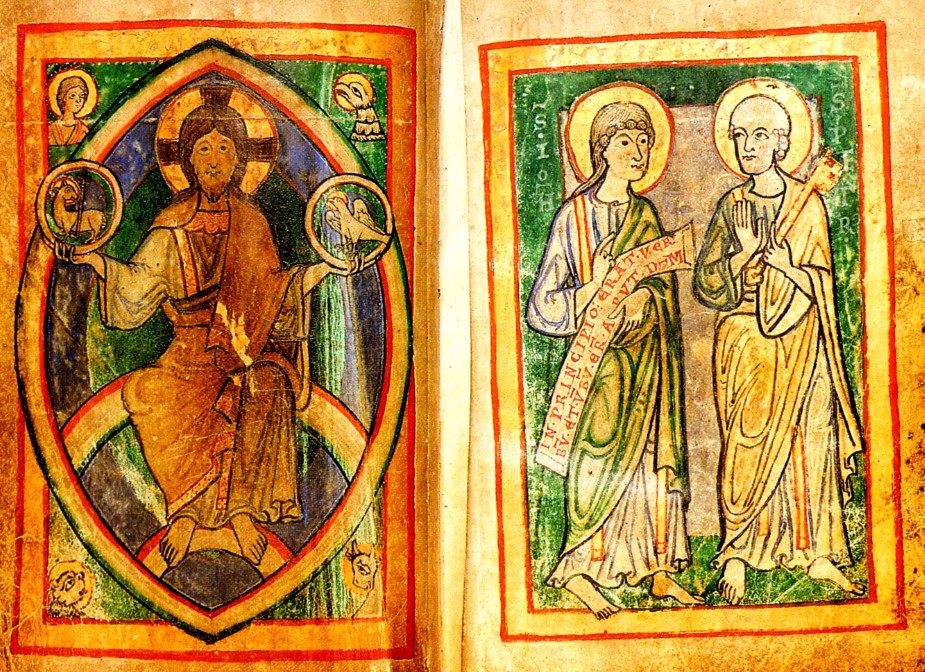 As I’ve been working on a large writing project on the doctrine of the Trinity (The Triune God in Zondervan’s New Studies in Dogmatics series), one of the things that has increasingly called for attention is the peculiarity of the way this doctrine was revealed. It’s simply not like other doctrines. I think the doctrine ought to be handled in a way that takes account of the way it was made known. More strongly: the mode of the revelation of the Trinity has structural implications for the right presentation of the doctrine. Here, in compressed form (propounded but not defended), are guidelines I’ve been working with for handling the doctrine.

1. The Revelation of the Trinity is Bundled With The Revelation of the Gospel. God published both at the same time, in the same ways: more obscurely and by way of anticipation under the old covenant, more luminously and by way of fulfillment under the new.  The answer to the question, “was the Trinity made known in the Old Testament” runs parallel to the question of whether the gospel was. In both cases, Trinity and gospel, we must account for two factors: the consistency of God’s entire work of salvation, and for the newness in the revelation of “the mystery which was kept secret since the world began, and that in other ages it was not made known to the sons of men, but  now is.” Epangel is not evangel, but they are both constitutive of God’s one message of salvation.

2. The Revelation of the Trinity Accompanies Salvation. Though it can be stated propositionally and in the form of information, it was not given primarily as information. Rather, this knowledge came along with the carrying out of God’s work of salvation. God saves, and further, wants the saved to “understand the things freely given us by God.” God did not hand down statements regarding the Trinity, but extended his arm to save, an action which by design brought with it knowledge of, and about, the one doing the saving.  As B. B. Warfield wrote, “the revelation of the Trinity was incidental to, and the inevitable effect of, the accomplishment of redemption.”

3. The Revelation of the Trinity is Revelation of God’s Own Heart. Theology, broadly considered, is knowledge of God and of all things in God; “all things” are accounted for by a great many doctrines. But the doctrine of the Trinity is theology proper, knowledge of God in se. Thus its focus is not on those aspects of the divine nature which are knowable by the things created or of God in relation to things outside of him; those things are spoken of in Scripture substance-wise, according to God’s one nature. But the doctrine of the Trinity is a statement about God’s interior life, requiring statements relation-wise, internal to the divine being, describing the Father and the Son and the Spirit as they stand toward each other. Prepositions will be decisive in here: “That true and absolute and perfect doctrine, which forms our faith, is the confession of God from God and God in God” (Hilary of Poitiers, On The Trinity, V:37).

4. The Revelation of the Trinity Must Be Self-Revelation. This knowledge cannot be delegated or delivered by proxy. Hilary of Poitiers again:

Since then we are to discourse of the things of God, let us assume that God has full knowledge of Himself, and bow with humble reverence to His words. For He Whom we can only know through His own utterances is the fitting witness concerning Himself.

5. The Revelation of the Trinity Came When the Son and the Spirit Came in Person. In the fullness of time, God sent forth His Son, and sent the Spirit of his Son into our hearts, crying Abba, Father (Gal. 4:4-6). God did not openly proclaim the existence of his Son and Holy Spirit and then send them; but sent them. God did not announce the Trinity; rather the Son of the Father showed up, with their Spirit. “The revelation itself was made not in word but in deed. It was made in the incarnation of God the Son, and the outpouring of God the Holy Spirit” (Warfield).

6. New Testament Texts About the Trinity Tend to Be Allusions Rather than Announcements. The evangelists and apostles write from a background assumption that readers know God the Father because they have met the Son and Holy Spirit. They refer almost off-handedly to this understanding as something already given, not something to be introduced, put in place, or argued for. There is an obliqueness in nearly every sentence on this doctrine in the New Testament.

7. The Revelation of the Trinity Required Words to Accompany It. Since the revelation was made by personal presence rather than by mere verbal announcement, interpreting it is in some ways more like interpreting God’s self-revelation through his mighty acts of deliverance than it is like interpreting God’s self-revelation through spoken oracles. But not exactly like it, because this particular mighty act of God was the mighty act of sending persons who speak. The Son and the Holy Spirit came preaching, and testifying to the truth and reality of their own twofold mission from the Father. Without these words, their personal presences would not have been the eloquent and luminous truth of the knowledge of God. In particular, if the risen Lord had not said “baptize in the name of the Father, the Son, and the Holy Spirit,” the early church would never have had the confidence to count to three in the doctrine of God. Biblical revelation is always through acts and words having an inner unity (Dei Verbum), or fact plus meaning (J.G. Machen); in the revelation of the Son, the inner unity of his acts and words is his person.

9. The Revelation of the Trinity Occurs Across the Two Testaments of the Canon. While the New Testament has a strategic priority as the latest moment in the process of progressive revelation, it actually takes both testaments together to produce the right expectations and interpretive pressure that lead to recognition of the Trinity. In particular, the canonical order is to be observed in the way God’s unity is explicated as internally threefold: the Bible is the story of how the one God reveals that divine unity eternally has the form of the unity of Father, Son, and Holy Spirit. Among other things, this is the justification for placing the dogmatic treatise On the One God before the full explication of On the Trinity (though it will be impossible for Christian exposition to exclude the persons of the Trinity from the treatise On the One God completely).

10. The Revelation of the Trinity in Scripture is Perfect.  It’s easy to think that the task of theology is to make something useful out of the mess of materials that God gave us in Scripture, or at least to put in logical order what was communicated in historical sequence. Theology can think of itself as synthesizing doctrine from raw materials, so in trinitarian theology we can get turned around by asking “is the Trinity in the Bible” and meaning “can the later synthesis be identified as a legitimate construction from the raw materials given in the Bible?” Something is backwards in such a question. In this doctrine especially, it is better to suppose that Scripture speaks from an achieved synthesis and gives partial expression, here and there, to glimpses of that fullness and coherence. To be specific, what we have in Scripture is rightly ordered, with the emphases falling in the right places. One application of this principle is that when a passage of Scripture names the Father and the Son but then fails to complete the triangle, we should neither pronounce it binitarian nor cram the Holy Spirit into it. In trinitarian theology, the Holy Spirit in particular has suffered as much from his overzealous promoters as his underzealous neglecters. He is fully God and a distinct person. But triangular symmetry is manifestly not a concern, or emphasis, or prominent motif, of Scripture, and we should not belabor it in every subpoint of our doctrine.

11. Systematic Theology’s Account of the Trinity Should Serve the Revelation of the Trinity in Scripture. Christian theology should be a humble discipline, pointing from itself back to Scripture as much as possible. It may need to invent new terms, make careful distinctions, and construct conceptual schemas to make sense of the evidence; I’m neither justifying theological laziness nor criticizing scholastic predecessors (who tended to obey this rule more than moderns have). But a systematic rendering of the Trinity should be careful not to rocket out of the orbit of the biblical content it is designed to explain. It ought to eventually lead back to good reading of the text. Scott Swain argues that “doctrinal propositions apart from the exegetical arguments that they summarize are at best ambiguous,” and this is especially true in trinitarian theology, where the dynamics of the arguments can be so conceptually seductive as to alienate theological affections from Holy Scripture. Because of what the inspired text is –the words of the Father and the Son speaking in the Spirit– readers may actually come into contact with the triune God in them. The systematic theology of the Trinity ought to help open that possibility, not occlude it.