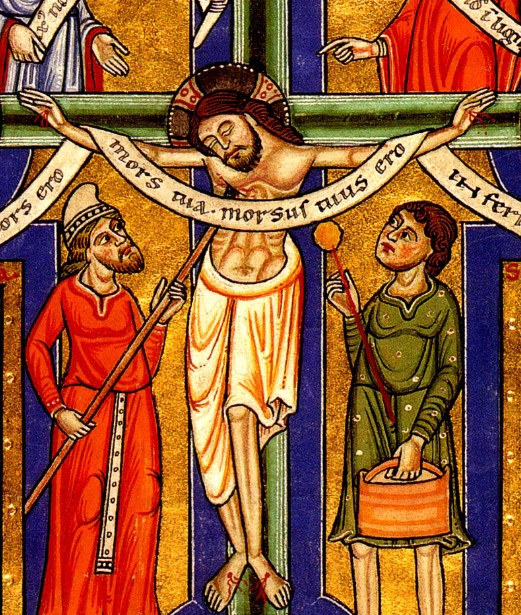 Psalm 22, with good reason, has long been read by Christians as prophetic commentary on the death of Christ. Jesus cried out the first line of the Psalm, “My  God, my God, why have you forsaken me?” during the crucifixion itself. But the entire Psalm, not just the opening line, runs in mysterious parallel to the events and meaning of passion week. The first 21 verses are uniquely centered on the cross.

Here are a few observations from the early and medieval church, drawn from J.M. Neale’s anthology of Psalms commentaries. If they are sometimes extravagant in their theological commentary, they nevertheless compensate for our modern stinginess.

My God, my God, why hast thou forsaken me? why art thou so far from helping me, and from the words of my roaring?

Scribanius: “Who could believe it, unless the Lord Himself said it? … that for our sakes the Father could have forgotten the Son, His only Son, the Son of God? So that He seems to have embraced us with greater love than His Son; us His sworn enemies, than the Son of the same Substance, and the same Divinity with Himself?”

Eusebius: “Though he was the fountain of righteousness, He took our sins upon Himself; and though He was the ocean of blessing, He endured the malediction pronounced upon us, and bare the Cross, despising the shame; so likewise He speaks for us here.”

2 O my God, I cry in the day time, but thou hearest not; and in the night season, and am not silent.

Michael Ayguan: “But how could the only-begotten Son cry, and the Father not hear? The prayer of Christ was twofold. The one kind proceeding from the deliberate will and foreknowledge, and that was always heard, as he saith Himself, ‘And I know that Thou hearest Me always;’ the other proceeding form the affections and sensitive part of of His human nature, and that was not always heard, as when He prayed that the chalice might pass from Him.”

Gregory the Great: “Let no one, when he is not instantly heard, believe that he is neglected by the Divine care. For it often happens that our desires are heard on this very account, because they are not granted at once.”

3 But thou art holy, O thou that inhabitest the praises of Israel.

Gerhoch: “The first Adam, in the Paradise of pleasure, in the cool of the day, being called by God, was silent: the Second Adam, on the Tree of Agony, in the heat of the conflict, being forsaken by God, was not silent, but praised Him.”

Rabbi Kimchi: “an appeal to Him Who is faithful and true, Whom Israel has so often before praised and blessed for His help in need, to hearken yet again to the same hymns and petitions.”

Lorinus: “This Psalm speaks more clearly of our Lord’s human nature than do the Gospels themselves. In the latter, our Lord never speaks of our Fathers, but of the Fathers, or your Fathers: here, as not being ashamed to call us brethren, and to testify to His true humanity, it is ‘Our Fathers.'”

6 But I am a worm, and no man; a reproach of men, and despised of the people.

Neale: “The metaphor has opened the door to all the luxuriousness of medieval symbolism.”

The festal purple of the Lord –
It is no garment stately;
A vest, by very slaves abhorred,
The worm hath tinged it lately;
‘I am a worm,’ –of old said He;
And what its toils have tinged, ye see.

Fisher the Father is: the world the sea,
His flesh the bait, the hook Hi Deity:
The line His Generation. Satan took
The proffered bait, and perished by the hook.

7 All they that see me laugh me to scorn: they shoot out the lip, they shake the head, saying, 8 He trusted on the Lord that he would deliver him: let him deliver him, seeing he delighted in him.

Dionysius the Carthusian: “And so from that time to this, have persecutors defied the Saints of God, or rather, the God of Saints: not knowing that a time will come when He will deliver them out of the bondage of corruption into the glorious liberty of the children of God, will have them in His own country, and His own city, in His own Presence.”

Eusebius: “He might well comfort Himself while hanging on the Cross by the remembrance that the very same body then marred more than any man, and His Form more than the sons of men, was that which had been glorified by the Father with such singular honour, when the Holy Ghost came upon Mary, and the power of the Highest overshadowed her; that this Body, therefore, though now so torn and so mangled, as it had been once the wonder, so it would for ever be the joy, of the Angels; and having put on immortality, would be the support of His faithful people to the end of time.”

11 Be not far from me; for trouble is near; for there is none to help.

Michael Ayguan: “But why? Because of the exceeding great love He had to us, He refused their help. To Peter it was, ‘Put up again thy sword into its place.’ Of the angels ready to come to His assistance, He said, ‘How then shall the Scriptures be fulfilled, that thus it must be?”

12 Many bulls have compassed me: strong bulls of Bashan have beset me round. 13 They gaped upon me with their mouths, as a ravening and a roaring lion.

Lorinus: “Here the Champion of the human race, like one of His own martyrs in after years, is brought out on to the arena of His sufferings.”

14 I am poured out like water, and all my bones are out of joint: my heart is like wax; it is melted in the midst of my bowels.

Michael Ayguan: “For water cleanses, and it is written, ‘In that day’ –namely, on that first Good Friday– ‘there shall be a Fountain opened… For water fructifies, and this is that river of which it is written, that it went out of Eden to water the garden, the whole garden of Christ’s Church.”

Augustine: “Besides the literal sense of the tension and dislocation of our Lord’s members, when hanging on the cross, they interpret it of the flight of the Apostles, who may truly be called the bones or chief supports of our Lord’s Body, the Church.”

15 My strength is dried up like a potsherd; and my tongue cleaveth to my jaws; and thou hast brought me into the dust of death.

Cassiodorus: “Not death, but the dust of death –that is, the outward appearance of it, because His soul was not left in hell, neither did His flesh see corruption.”

Thomas Aquinas: “The dust of death; the vilest and most disgraceful death.”

Lorinus: “He knoweth whereof we are made, He remembereth that we are but dust. And this dust He will also remember on the third day.”

16 For dogs have compassed me: the assembly of the wicked have inclosed me: they pierced my hands and my feet. 17 I may tell all my bones: they look and stare upon me.

Gerhoch: “And why does He only mention His Hands and His Feet, and not His Side? Because, says one, He suffered to leave us an example of patience. And patience is not exercised in a dead, but only in a living body.”

18 They part my garments among them, and cast lots upon my vesture.

Parez: “This tunic fell to the lot of a Gentile soldier, to show that the faith of Christ was henceforth to belong to the Gentile world.”

Bernard: “As Adam lost the four garments of mercy, truth, justice, and peace, so our Lord atoned for that loss by His own loss; but the seamless vest represented that image of god which was not destroyed even by the fall, but still remains implanted in, and impressed on human nature, even unregenerate.”

19 But be not thou far from me, O Lord: O my strength, haste thee to help me.

Gerhoch: “And the prayer was indeed accomplished, for the three days and three nights were so shortened, as scarcely to embrace half the time that the words usually signify… he lay in the grave but thirty-four hours.”

20 Deliver my soul from the sword; my darling from the power of the dog. 21 Save me from the lion’s mouth: for thou hast heard me from the horns of the unicorns.

Lorinus: “He prays for the Head and the Body: the Head, Himself, ‘My Soul:’ the Church: ‘My darling.'”