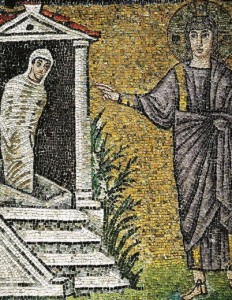 Whether the doctrine of the Trinity is in the Bible is a nice question. Yes or no?

When asked, I routinely answer “yes,” and then backpedal from there: I concede that the key terminology (person, substance, Trinity) is not to be found in the words of Scripture, that the whole conceptual package is not assembled in any one place, and that the doctrine becomes explicit only when a judgement about the right meaning of larger tracts of Scripture must be made.

Nevertheless, it’s in there. I agree with B. B. Warfield, whose essay on “Trinity” for the International Standard Bible Encyclopedia says that the doctrine “can be spoken of as a Biblical doctrine only on the principle that the sense of Scripture is Scripture.” And expressing a biblical truth by using unbiblical terminology is justified because “it is better to preserve the truth of Scripture than the words of Scripture.” So I say “yes” and go on to specify what I mean, and don’t mean, by that.

The other alternative when asked if the doctrine of the Trinity is in the Bible would be to say “no,” and then try to shore up the foundations by showing why the doctrine is justified anyway: because the early church was right when they went beyond the Bible to formulate this doctrine; because the church fathers were only making explicit what was implicit in the text; because trinitarianism is a synthetic judgement about the entirety of Scripture rather than a statement found anywhere within it; because exegesis is not dogmatics; because Scripture gives the building blocks but we assemble the doctrinal building, etc.

There are several reasons I don’t argue this way: rhetorically, many listeners check out at the syllable “no” and never hear the good stuff in the rest of the answer; biblically, more is explicit in Scripture than a negative answer seems to permit (see below); and in terms of church tradition, this is not how the church fathers talked, so it’s not really very patristic to claim you got the doctrine from the patristics if they claim to have got it from the Bible.

But whichever single-syllable answer you start with, you eventually have to come down to terms and specify what it would mean for “a doctrine” (definition, please) to be “in the Bible” (definition, please). Here is some help with that task: writing in 1991, Cornelius Plantinga argued that the Gospel of John was a major source of trinitarian theology because

among all the New Testament documents the Fourth Gospel provides not only the most raw material for the church doctrine of the Trinity, but also the most highly developed patterns of reflection on this material –particularly, patterns that show evidence of pressure to account somehow for the distinct personhood and divinity of Father, Son, and Spirit without compromising the unity of God.

I count three important elements here: 1. Raw material, 2. patterns of reflection on it, and 3. pressure.

All three elements are there in Scripture. It’s tempting to stop at the first one, and affirm that a book like John gives us just the raw material, just the characters of Father, Son, and Holy Spirit in a narrative framework, to make something of doctrinally. But stopping there would be treating the apostolic author as a rather dumb recorder, someone capable of capturing what happened but not of reflecting on it intelligently. “Here’s the facts,” he would say, while handing them over to clever theologians to do something with.

No, the New Testament doesn’t just give us raw material, but material that’s already been considerably cooked. That is, in Plantinga’s terms, the Bible gives us “highly developed patterns of reflection” on the data. John’s Gospel is not just reciting the adventures of three characters, but is also posing questions and making claims about how they are related to each other: who sends who, what glory is given and received, what kinds of relationships do they have with each other, how are they to be understood? There is theologizing going on here.

And third, there is pressure: “pressure to account somehow for the distinct personhood…without compromising the unity.” I think that pressure is there in the text, and I think it’s the same pressure that forced the early church to deliberate further on both the raw material and the patterns of reflection they found in Scripture.

Taken together, I think the material, the patterns, and the pressure are enough to support the positive answer that yes, even though we don’t have the fully-formulated statement of the doctrine of the Trinity in Scripture, we do have the doctrine. To say less is not to say enough. As long as “the sense of Scripture is Scripture,” and the sense is present in its raw material, its patterns of reflection, and the pressure it exerts.

The Plantinga quotation is from “The Fourth Gospel as Trinitarian Source Then and Now,” in Biblical Hermeneutics in Historical Perspective, ed. M. S. Burrows and P. Rorem (Grand Rapids: Eerdmans, 303-321). For a discussion of it, and excellent remarks on the trinitarian theology of John’s Gospel, see Andreas J. Köstenberger and Scott R. Swain, Father, Son, and Spirit: The Trinity in John’s Gospel (InterVarsity Press, 2008), esp. pages 19-24. For a lot more good stuff on “pressure,” see Kavin Rowe’s article “Biblical Pressure and Trinitarian Hermeneutics,” Pro Ecclesia 11:2 (2002).