Has the dust settled yet on the massively multi-player online battle royale evangelical Trinity discussion of 2016? Here’s a sign that the dust has settled: there are now books on the subject in print. Three books, in fact. 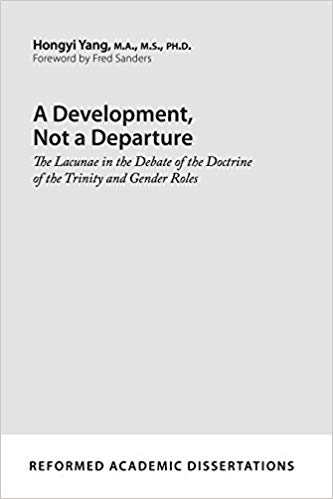 The first is P&R’s publication of Hongyi Yang’s dissertation. The title of the book is A Development, Not a Departure: The Lacunae in the Debate of the Doctrine of the Trinity and Gender Roles. I was the outside reader for Hongyi’s SWBTS dissertation in April 2016. Yes, that’s a few months before the online discussion got active, which means Hongyi deserves some kind of prophecy prize for dissertating on something that was rumbling around underground but finally exploded about sixty days after her oral defense.

Hongyi’s argument is right there in the title: that the ERAS teaching can be viewed as a kind of doctrinal development from earlier trinitarianism, drawn forth by the modern anti-authoritarian cultural context. I wrote the foreword for Hongyi’s book, in which I summarized her argument as follows:

Dr. Yang’s particular hypothesis is that the modern cultural context is so strongly oriented toward equality of all kinds, and against hierarchy of any kind, that it threatens to distort the traditional Christian confession that the three persons exist in coequal and coeternal fellowship that is nevertheless structured according to a particular interpersonal taxis. It is indeed a striking intercultural observation about the difference between the ancient Christian culture that produced classical Trinitarian confessions (a culture at home with a range of hierarchical realities, and fluent in describing them), and modern Western culture (a culture inveterately suspicious of all ordered structures and allergic to hierarchies of any kind). Dr. Yang argues that in order to continue saying the same thing we have always said about the unity and distinction of the three persons of the Trinity, it would make sense for the church in modern culture to take the step of articulating the ordered distinction between the Father and the Son in terms of some sort of interpersonal, relational authority. That some evangelical theologians attempted to do this without the resources of classical Trinitarianism—indeed, even sometimes denying them—was inauspicious in the extreme. Dr. Yang has learned the right lessons from those episodes, and teaches them here.

While I do not entirely agree with Hongyi’s argument (among other things, I am more suspicious about doctrinal developments), I think her book is a remarkable document, and some of the best reporting and analysis of the discussion from someone who was uniquely close to the action, but whose voice has not yet been heard by many. 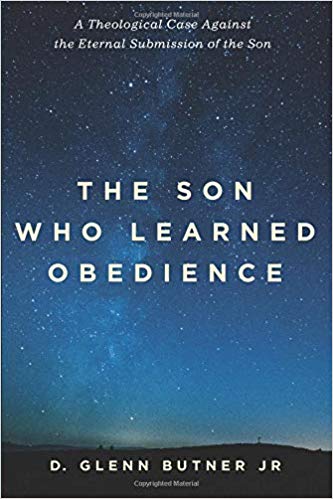 The second book is Glenn Butner’s The Son Who Learned Obedience: A Theological Case Against the Eternal Submission of the Son. This is a fine study, written from a greater distance away from the institutional hot spots and centers of controversy, but very much committed to engaging the controversy by placing it in a larger perspective. I endorsed Glenn’s book (I know, I know, the blurbing, it’s getting out of control) for these virtues:

In The Son Who Learned Obedience Glenn Butner takes the recent controversy over eternal functional subordination and places it into an effective dialogue with the long history of trinitarian and christological doctrine. Many commentators have quoted a few church fathers and some reformers along the way. Butner’s book is the best so far in rehearsing the classical lines of Christian doctrine, patiently comparing them to the terms of the recent debate. The result, especially for questions about dyotheletism and the singular will of the Trinity, is immensely clarifying.

Glenn really does write with an unusually firm grasp of the great tradition. Like Hongyi, he too was writing a dissertation on the Trinity in 2016, but not on this specific subject. I think Glenn’s broader preparation in classic historical sources equipped him to turn to this subject and handle it with the most equanimity I’ve seen. When he quotes an ancient theologian, he’s obviously interested in traditional theology for its own sake, and much of his book is made up of patient, rewarding expositions of those older sources and their underlying commitments. Of the three books considered here, The Son Who Learned Obedience is the one most likely to be read profitably by those who didn’t pay much attention to the 2016 debate, and the one most likely to be read in the future by people who have forgotten the debate: much of it is simply solid interaction with the tradition, without undue distortion from recent controversy.

In case you’re wondering how I can endorse both Hongyi’s and Glenn’s books, which move in different worlds and reach divergent conclusions: it’s complicated. Both are instructive.

Speaking of complicated and instructive, the third book is Trinitarian Theology: Theological Models and Doctrinal Application, edited by Keith Whitfield (B&H Academic,  yesterday). This is a three-Baptist-views book, and the three Baptist viewers are Bruce Ware, Malcolm Yarnell, and Matluke Stamperson (who is actually Matthew Emerson and Luke Stamps, but who co-author one view).

The most immediately important thing about this book is that in it, Bruce Ware puts in print some of the modified position that he has been working out in public conversations since at least ETS 2016. He is helpfully straightforward about what has changed:

I have never in the past said that the doctrine of eternal generation is wrong, but I have questioned whether Scripture teaches it, and frankly I’ve puzzled over just what it means. That I have now come to embrace this doctrine is evidence, to my way of thinking, of God’s gracious continued work in my mind and heart, to move me closer to the truth of his word.

Those of us who are deeply motivated to see evangelical trinitarianism get more robustly classical can certainly say amen to any embrace of eternal generation. Bruce footnotes his previous position, pointing to that vexing footnote on page 162 of his 2005 book Father, Son, and Holy Spirit.

He is, however, equally clear that his embrace of eternal generation does not eliminate his commitment to an eternal relational authority-submission view of the Father-Son relation. In fact,

While the categories of “relations” and “roles” are the clearest and most comprehensive in undergirding that which distinguishes the Father from the Son and from the Spirit, within these relations, and expressed in their respective roles, one finds a prevailing authority-submission structure that gives order and direction to the roles carried out by the three trinitarian persons.

Bruce has also introduced more complexity into his account of the divine will. The problem he is trying to solve is that an eternal relation of authority and submission requires one will that commands and another will that obeys. But Ware is increasingly eager to affirm the traditional teaching that God’s will belongs to his essence, so that here is one essential will in God. Borrowing language from a Khaled Anatolios essay, he speaks of one divine will with three personal inflections, “one volitional capacity of nature with distinct expressions or inflections of willing from each of the three divine persons.” Or, to put it another way, Bruce examines in any divine action “the particular ways each divine person activates that common will from his particular personhood in distinct yet undivided personal action.”

Within the volume, it’s Matthew Emerson and Luke Stamps who press hardest against Bruce Ware’s approach. Indeed, Yarnell mostly tries to moderate between these two, sometimes admitting the strengths and weaknesses of each, but usually abstracting from the immediate discussion to a set of methodological considerations about how Trinity discussions influence theological anthropology. It will be good to hear more from Yarnell on this in the future; in this book, by his own admission, he basically buffers between brother Baptists.

But Emerson and Stamps keep up the pressure. Unfailingly polite and respectful in their interactions with the others, they devote considerable space to methodological discussions which are less contentious: that biblical reasoning requires both exegesis and canonical context, as well as creedal shaping and ruled reading. Keen listeners will recognize in this methodological tune the notes of Baptist catholicity, or at least of Baptist renewal in the great tradition. May a mighty chorus of Baptists join them on the next verse of this song!

As for the Trinity discussion, they are steely in their opposition to univocal social trinitarianism, and adamant in rejecting eternal submission:

We remain convinced that the traditional trinitarian categories –ouia and hypostasis, properly understood; processions and missions; one divine will and authority –are much to be preferred to the relatively newer categories of functions, roles, and relations of authority and submission.

ERAS seeks to distinguish the persons, not only in terms of their eternal relations of origin, but also in terms of additional properties related to authority and submission. But in the traditional doctrine of the Trinity, the persons share every property in common except for those relations of origin. To add to these traditional distinctions is to introduce a host of theological problems.

Emerson and Stamps make this recommendation for evangelical trinitarianism in particular: “We humbly suggest that evangelical theology is at its best when it positions itself as a renewal movement within historic Christian orthodoxy, not as an innovating sect pushing the boundaries of orthodoxy.” And the footnote points to Timothy George.

To conclude this roundup: If anybody asked me in advance if they should write a book about Trinitygate 2016, I would probably say no, and recommend they lift their eyes up to something much further back, much further away, with proven and perennial staying power. Or I might suggest waiting a few years to see if it still felt urgent at all. But I’m glad for all three of these books: in their own ways, each of them is the result of careful analysis, seasoned reflection, and a willingness to plunge into the discussion right where it is, or was.