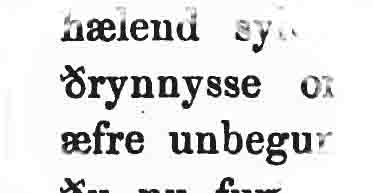 The word “Trinity” is not in the Bible, true enough. But don’t let the fanciness of the word “Trinity” throw you, it just means “threeness.” I was looking around in some Old English, or Anglo-Saxon, Bible commentaries a while ago, and saw that the word “Trinity” showed up there just as “thrynnysse.” I was getting used to the weirdness of Anglo Saxon; to seeing the Almighty referred to as Aelmihtigne, and the savior himself as the haelend sylf, and the holy gospel as the halgan godspelle. But seeing the Trinity as thrynysse was wonderfully clarifying. I suppose almost everything sounds smarter in Latin, so saying “threeness” in Latin sounds like you’re really saying something technical: “Trinitas.” Nope, it’s just threeness, thrynnesse. So when you read Matthew 28:20, “Baptize in the name of the Father, the Son, and the Holy Spirit,” you might catch yourself counting to three. Having counted to three, you might want a word for the threeness you’ve counted to. Go ahead, pick a word for it. “Trinity” is not in the Bible, but it’s also not as far from it as some people think.