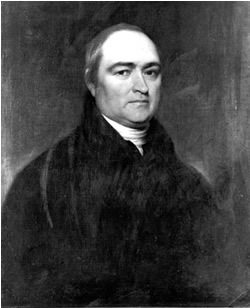 Timothy Dwight (born this day, May 14, 1752; died in 1817) became the President of Yale at a time in American higher education when skepticism was becoming cool, and all the young men of the nation who had spent a few months on a college campus expected each other to be outgrowing the colonial faith of their fathers. Some would become simple skeptics (“freethinkers”), some agnostic, some deists, and of course many of them would develop views so rarefied and idiosyncratic that none of the labels available in their day could possibly contain their undergraduate wisdom.

Dwight walked into this situation and did two things: He preached and he argued. His sermons are of the “Why It Behooves the Young to Consider their Creator” variety, full of moral earnestness and piety. His arguments were direct attacks on the fashionable atheism of the day, mostly of French import. He named the names of Voltaire and Diderot and the others, (which the younger generation thought the older generation wasn’t supposed to know) and considered their arguments against Christianity one by one. Dwight carried out this discussion in public, in special classes especially aimed at the senior class. The arguments against the Christian faith came out of the shadows of the dorm rooms and took place in the full light of the academy. Dwight’s students suddenly realized they were accountable for the drift and direction of their college opinions.

Dozens of them accepted Christian claims, altered their opinions on point after point, and pledged allegiance to God’s word. Many entered the ministry. The seniors took it upon themselves as a special task to propagate this movement among the underclassmen, and Dwight helped them organize their efforts.

Timothy Dwight was the human instrument responsible for one of the nerdiest revivals in American history. His book Theology Explained and Defended is the landmark of this movement.