Today in 1850, Charles Haddon Spurgeon (1834-1892) heard the voice of God calling him in the words of Isaiah 45:22, through the sermon of a Primitive Methodist preacher: “Look unto Me, and be ye saved, all the ends of the earth.” 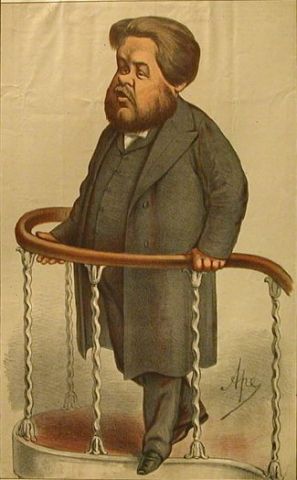 Spurgeon looked and was saved at age 15, and went on to become one of the greatest preachers of modern times. He preached a vast number of sermons in his life, but he excelled in preaching a clear message of salvation in a way that could reach sinners. He knew from experience that they were eager for that clear, simple direction: Look to Jesus and be saved.

By one count, he told the story of his conversion 280 times in his published sermons, so some minor variations have slipped into the accounts. Here is my favorite:

I sometimes think I might have been in darkness and despair now, had it not been for the goodness of God in sending a snowstorm one Sunday morning, when I was going to a place of worship. When I could go no further, I turned down a court and came to a little Primitive Methodist Chapel. In that chapel there might be a dozen or fifteen people. The minister did not come that morning: snowed up, I suppose. A poor man, a shoemaker, a tailor, or something of that sort, went up into the pulpit to preach. He was obliged to stick to his text, for the simple reason that he had nothing else to say. The text was, ‘Look unto Me, and be ye saved, all the ends of the earth.’ He did not even pronounce the words rightly, but that did not matter.

There was, I thought, a glimpse of hope for me in the text. He began thus: ‘My dear friends, this is a very simple text indeed. It says, “Look.” Now that does not take a deal of effort. It ain’t lifting your foot or your finger; it is just “look.” Well, a man need not go to college to learn to look. You may be the biggest fool, and yet you can look. A man need not be worth a thousand a year to look. Anyone can look; a child can look. But this is what the text says. Then it says, “Look unto Me.” ‘Ay,’ said he, in broad Essex, ‘many of ye are looking to yourselves. No use looking there. You’ll never find comfort in yourselves.’ Then the good man followed up his text in this way: ‘Look unto Me: I am sweating great drops of blood. Look unto Me; I am hanging on the Cross. Look: I am dead and buried. Look unto Me; I rise again. Look unto Me; I ascend; I am sitting at the Father’s right hand. O, look to Me! Look to Me!’ When he had got about that length, and managed to spin out ten minutes, he was at the length of his tether.

Then he looked at me under the gallery, and I daresay, with so few present, he knew me to be a stranger. He then said, ‘Young man, you look very miserable.’ Well, I did; but I had not been accustomed to have remarks made on my personal appearance from the pulpit before. However, it was a good blow struck. He continued: ‘And you will always be miserable—miserable in life and miserable in death—if you do not obey my text. But if you obey now, this moment, you will be saved.’

Then he shouted, as only a Primitive Methodist can, ‘Young man, look to Jesus Christ.’ There and then the cloud was gone, the darkness had rolled away, and that moment I saw the sun; and I could have risen that moment and sung with the most enthusiastic of them of the Precious Blood of Christ.”

Sunday, January 6, 1850, is the most widely-accepted date for Spurgeon’s conversion, but there is some scholarly disagreement abut it. The late Lewis Drummond’s book Spurgeon: Prince of Preachers makes a pretty good case that January 13 is more likely to be actual date. He compares various accounts, reports on the actual preachers’ log for the local Primitive Methodist church, and checks the best available meteorological reports for the winter of 1850. The last point is telling: In London, at least (no records exist for Spurgeon’s Colchester), January 6 was a clear day, but January 13 had heavy snow. (Most of the relevant argument about the dating can be seen in the preview of the book available at Google books)

The fact is, Spurgeon and his earliest biographers were all a little sloppy about recording this event.

I appreciate that. That little bit of reportorial sloppiness helps downplay the event itself, the event considered as a moment in the biography and the psychological history of the man Spurgeon. Instead, it keeps the message of salvation central: Look to me and be saved. Spurgeon certainly did that, sometime around January 6. And it made all the difference in the world, and he told the story 280 times in sermons. But Spurgeon draws our attention to his own experience of conversion for a much greater reason than to fill out the pages of his biography accurately. He draws our attention to his own conversion so that we too can look to Jesus, where salvation is.