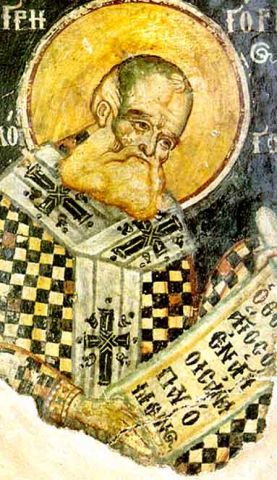 Gregory of Nazianzus is among the most important and influential of the church fathers, as can be seen from the rank he occupies in no less than three traditional honorific triads.

The first triad with which Gregory is associated is the Cappadocian Fathers: Basil the Great, Gregory of Nazianzus, and Gregory of Nyssa. The work of these three friends is commonly considered as a single collective contribution to the development of dogma, and especially to the definition of the doctrine of the Trinity.

The second triumvirate in which Gregory is ranked is “the three hierarchs” who exerted decisively formative influence on the theological and liturgical life of the Eastern church: Basil the Great, Gregory, and John Chrysostom.

Finally, Gregory belongs to a select group of three men, from three different centuries, who the Eastern Orthodox church honors with the title of “Theologian:” John the Evangelist, Gregory himself, and Symeon the New Theologian (tenth century). Since patristic authors use “theology” as something of a technical term denoting the mystery of the Triune God, Gregory’s identification as The Theologian indicates that he is especially closely identified with the doctrine of the Trinity.

Although he was constantly engaged in articulating and defending the doctrine of the Trinity throughout all of his works, it is his Five Theological Orations in particular which earned him the title of Theologian. The historical context of the Five Theological Orations is significant, but it can be sketched briefly: they were most likely delivered in the summer of 380 in the house-church in Constantinople which Gregory named Anastasia. In December of that same year, the emperor Theodosius would restore all church property to the Nicene congregation, and install Gregory formally in the church of the Apostles. For a brief time, however, between the death of the Arian Valens and the triumphal entry of the Nicene Theodosius, Gregory presided as bishop of a marginalized and relativized orthodox congregation, and it is in this awkward environment that he contended with all his intellectual and rhetorical skills against Arians who denied the deity of Christ, and Pneumatomachians (fighters-against-the-Spirit) who denied the deity of the Spirit. The situation seems to have brought out the best in Gregory; the Orations are marked by close engagement with his opponents, but never to the exclusion of a broad vision and comprehensive constructive statements of the orthodox faith in its organic unity.

The Five Orations are a nearly inexhaustible text, but here are two of the most important things Gregory teaches in them.

Triunity on the Top Shelf

First, Gregory insists that the Son and the Spirit belong to the essence of God and that therefore their modes of origin from the Father are on the same level as the mystery of God’s own being. His opponents are apparently willing to admit that God’s being is incomprehensible in itself, so Gregory’s task in his debate with the Eunomians and pneumatomachians is to persuade them that the generation of the Son and the procession of the Spirit belong properly to that same level of divine being.

If you admit that these modes of origin from the unoriginate Father belong on the top shelf, then they share in the mystery of the divine essence itself. Indeed, placing the generation of the Son and the procession of the Spirit on a lower shelf from the being of God is a definition of subordinationism. Gregory drives this point home repeatedly:

…It is not the case that the ingenerate and only the ingenerate is God, but you must allow that the Begotten too is God. The Begotten stems from God, however fond you are of unbegottenness… So what is the being of God? You must be mad to ask the question, making such a fuss about unbegottenness! If it is a high thing for the Father to have no starting point, it is no less a thing for the Son to stem from such a Father. That he has been begotten is a further fact about him, as significant as it is august, for men whose minds are not totally earthbound and materialistic.

And in the fifth oration, applying the same “top shelf” logic to the Spirit:

What then is ‘proceeding?’ You explain the ingeneracy of the Father and I will give you a biological account of the Son’s begetting and the Spirit’s proceeding, and let us go mad the pair of us for prying into God’s secrets.

Even allowing for Nazianzus’ characteristic rhetorical bombast, we must acknowledge his point: If the Son is fully divine, then it is not for us to decide whether sonship is fitting for a person of the Trinity. Epigramatically, Nazianzus concludes this discussion: Sonship is no defect.

If a theologian is going to assert that the eternal relations of origin belong on the top shelf with the being of God, it is incumbent on that theologian to provide the evidence that the Son and the Spirit are fully divine. These proofs should be drawn rather directly from scripture and be as persuasive as possible. Their witness should be clear rather than ambiguous, and the relevant passages should be copious rather than scarce. A general waving of the hand in the direction of the evidence would be inadequate here.

Nazianzus is aware of this, and a great bulk of the Five Orations (especially the third and fourth orations) is made up of vigorous presentations of the biblical evidence for the deity of the Son and the Spirit, to which Nazianzus annexes explanations which had become by the fourth century commonplaces of controversial theology, along with defenses against counter-arguments. Structurally speaking, this material supports Nazianzus’ argument that the eternal relations cannot be placed on a lower shelf than divinity itself.

The second bit of interpretive wisdom we can learn from the Five Orations is found in the concluding discussion about what is clearly stated in Scripture and what must be admitted to be, as Gregory’s greek vocabulary has it, agraphon: not in Scripture. Nazianzus is specifically arguing against the pneumatomachian objection that there is not enough biblical evidence of the deity of the Spirit to warrant our calling him divine. His response is not that there is any other possible source of knowledge about the Godhead, whether it be tradition or mystical illumination or reason. Instead, he presents a little didactic lecture on words, things, and meanings, concluding that Scripture can mean things that it does not formulate explicitly. “So why are you so dreadfully servile to the letter, following the syllables while you let the realities go?” he asks.

And then comes his great example: “Supposing you mention ‘twice five’ or ‘twice seven’ and I infer from your words ‘ten’ or ‘fourteen.’ would you allege that I was talking rubbish? How could I be? I am saying what you said.” Nazianzus’ use of a numerical example is telling: throughout the Five Orations, he has been repeating the baptismal formula of Matthew 28 with its threefold name, Father, Son, and Spirit, and using the word “Triad” in that context. “Triad” is greek for threeness, just as Trinitas is latin for threeness. Early in the English-language theological tradition, the relevant word for this was Thrynnysse, as in an Anglo-Saxon example I’ve quoted here before: Tha halgan thrynnysse on sothre annysse, aenne Aelmihtigne God, aefre unbegunnene, se the naefre ne geendath.”

Even today, when people object that the word Trinity is not in the Bible, they are often mis-led by the technical sound of the Latinate word, which really only means threeness, and is thus a modest summarizing statement about how many names are there to be counted in the one baptismal name in Matthew 28:19. Of course, having counted to three, one can go on to ask ‘three what?’ Responsible Trinitarian theologians will indeed go on to pose this question, and answer it to the best of their abilities. But Nazianzus establishes the main, plain lines and the mandatory starting point of Trinitarian theology when he says the three names over and over, and summarizes them in the admittedly unscriptural word ‘Triad.’

Gregory’s Five Theological Orations were the high water mark of trinitarian theology up to that date. Much that had been scattered, unclear, and ill-defined since the outbreak of the Arian controversy was gathered up by Gregory and summarized with a new confidence and insight into the mystery of the Christian idea of God. With Gregory’s work, the doctrine of the Trinity became a sure possession of the Christian church. As a later eulogist of the Theologian (Nicetas the Paphlagonian) said, the theology of the Triune God emerged from obscurity and took its place at the center of Christian theology after Gregory gave his sermons:

From then on the Trinity, like a thrice-brilliant lamp supernaturally lit within him, no longer tolerated being hidden under the tub of silence, no longer thought it necessary to accommodate itself to the opinion of the unsound.