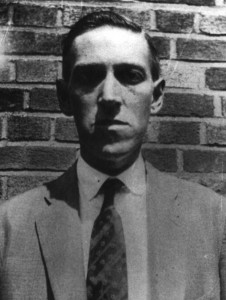 I know this day is most famous for the death of Julius Caesar, but I did not come to bury Caesar or to praise him. Instead, I want to point out a writer for whom every day was the Ides of March.

Howard Phillips Lovecraft (born 1890, died this day, March 15, 1937) was one weird writer. Consider one of his earliest stories, Beyond the Wall of Sleep. The plot: A young doctor is treating a crazy drifter, and decides that his ravings are too coherent to be explained by plain madness. So he hooks him up to an experimental machine and spies on his dreams. What he sees in the other man’s dreams are visions of another world which is some kind of phantasmagoria of impossibly huge classical architecture dissolving into infinite vistas of unearthly landscapes:

The sound of weird lyric melody was what aroused me. Chords, vibrations, and harmonic ecstasies echoed passionately on every hand, while on my ravished sight burst the stupendous spectacle of ultimate beauty. Walls, columns, and architraves of living fire blazed effulgently around the spot where I seemed to float in air, extending upward to an infinitely high vaulted dome of indescribable splendor. Blending with this display of palatial magnificence, or rather, supplanting it at times in kaleidoscopic rotation, were glimpses of wide plains and graceful valleys, high mountains and inviting grottoes, covered with every lovely attribute of scenery which my delighted eyes could conceive of, yet formed wholly of some glowing, ethereal plastic entity, which in consistency partook as much of spirit as of matter.

It turns out that the drifter is a frail, unresponsive host body to an other-dimensional being who has epic battles to wage in interstellar space against a shadowy, demonic opponent who mocks him. That opponent has something to do with a star visible from Earth, called the demon star. In fact, when the drifter dies, the doctor learns of a new star in the heavens, very near the demon star. It blazes brighter for some time, and then burns out.

The big idea in the story is contained in the title: We spend our lives in a normal consciousness of the ordinary world, but just beyond the thin barrier of the unconscious mind there is another realm whose glories are ineffable, where titanic conflicts take place between beings far above us on the scale of being. Beyond the wall of sleep.

As Lovecraft stories go, “Beyond the Wall of Sleep” is a relatively nice one. The other world glimpsed here is a fascinating and even inspiring place. In fact, this lowly drifter, who amounts to nothing in our world, is a being of great power and noble undertakings when he closes his eyes and crosses over. That has all the makings of a Victorian parable about the dignity of the least human soul.

But “Beyond the Wall” was just the beginning for Lovecraft, and he had a different mythos working in his mind. He wrote a lot more stories, in which he relentlessly circled back to a handful of ideas, and filled out the details of that other world. It’s mostly hellish. In fact, it’s mostly populated with gibbering demonic things. A typical sentence from one of his later characters who approaches the other world is: “I felt the strangling tendrils of a cancerous horror whose roots reached into illimitable pasts and fathomless abysms of the night that broods beyond time.”

And the occupants of the other world are described thus:

in the Vastnesses transcending our world are Shapes of darkness that seize and bind. The Affair that shambleth about in the night, the Evil that defieth the Elder Sign, the Herd that stand watch at the secret portal each tomb is known to have, and that thrive on that which groweth out of the tenants within — all these Blacknesses are lesser than HE Who guardeth the Gateway; HE Who will guide the rash one beyond all the worlds into the Abyss of unnamable Devourers.

That’s the kind of mock-Satanism that Lovecraft fans sign up for: gore-dripping fangs, quivering masses of goo, etc. This “Cthulhu mythos” is a far cry from the celestial architectures first glimpsed in “Beyond the Wall of Sleep.” In fact, Lovecraft’s creepy visionary weirdness is the source of all manner of horror movies, heavy metal album covers, H. R. Giger illustrations, comic books and tattoos. Though it didn’t make it to the movie, the original Watchmen comic book ended with a giant other-dimensional telepathic squid that is straight out of Lovecraft. I don’t recommend reading Lovecraft, but when you do, you find that you’ve tapped one of the main sources of modern spookiness. Whenever somebody wants to be really really blasphemously bad, they reach for their Lovecraft.

As it turns out, Lovecraft is pretty clear that the other world is not really “other” at all: the alien beings are not spiritual, because matter is all there is. They are material beings who are just older, weirder, bigger, and stronger than us. Though they’re malevolent and prone to torturing, they don’t especially hate humans. They are cosmic, they are the world beyond us. And the whole point for Lovecraft’s actual philosophy, as it was gradually unfolded in his relentlessly unedifying writings, is that the world doesn’t care about humans. The world is a big terrible place, indifferent to human life. When the curtain is drawn aside and a Lovecraft character glimpses actual ultimate reality, his characteristic response is to go mad and “scream and scream and scream.”

The world that Lovecraft conjured could be a transcription of his own tortured unconscious. His personal life was not a pretty thing. His refusal or inability to grow up and enter the adult world of responsibilities meant that his creative powers turned in on himself and his spirit went septic during the very years when he had a surplus of emotional energy. In his own way as a New Englander formed by the late nineteenth century, Lovecraft is a kind of archetype of the basement-dwelling, pop-culture-swilling, suburban man-boy that became such a commonplace of the late twentieth century.

But while this psychological explanation might account for some of Lovecraft’s ongoing popularity, something more is needed to account for the originality of the body of work he produced. The explanation I find most persuasive is that Lovecraft was responding to the vision of the cosmos offered by the educated classes to the average intelligent person at the turn of the twentieth century. What is the universe, according to the dominant account of the twentieth century? Matter in motion, and nothing more. It is mechanism with no mechanic; it is not only mindless, but singularly inhospitable to the presence of mind.

Laura Miller of Salon.com put her finger on this source of Lovecraft’s creepiness a few years ago in a review of the Library of America volume of his stories. She quoted Lovecraft’s own view of the role of the non-human in his work: “All my tales,” he wrote, “are based on the fundamental premise that common human laws and interests and emotions have no validity or significance in the vast cosmos-at-large.” With our reason and emotion and all our human-ness, we are fish out of water in a universe that’s either up to something else entirely, or is up to nothing.

The great size, tremendous age and general indifference to humanity of Lovecraft’s invented gods is meant to be terrifying in the same way that the contemplation of the infinite and empty reaches of space were to a Western culture shaking off the comforts of religion. Lovecraft intended Cthulhu and company to be utterly alien — hence the unpronounceable name, the writhing tentacles, and the wonderful detail that the architecture of Cthulhu’s city, R’lyeh (usually sunk to the bottom of the ocean, but briefly emerging in “The Call of Cthulhu”), is based on a non-Euclidean geometry that is “loathsomely redolent of spheres and dimensions apart from ours.”

What response should a human spirit have to that vision of the world? Secular public intellectuals assure us that we should carve out our cozy little regional pockets of meaning and rejoice in our own scarcity among the impersonal cosmos. Contemporary inheritors of the mantle of Carl Sagan praise the billions and billions of particles; the mechanism and the chance fill our human hearts with romance and our minds with creativity.

Lovecraft, on the other hand, bought the premise but drew a very different conclusion. A world like that is horror. And when the curtain is was drawn aside, Lovecraft let out a sustained literary shriek of gruesome terror which continues to be picked up on our cultural antennae. Francis Schaeffer once warned that there was an ultimate choice to be made between “personality or the devilish din;” and that if you rejected a personal God behind the universe, you would never be able to get back to peronhood or human dignity. All that remains is an infernal racket. A meaningless cosmos with no place for humanity in it is not a benign romp through Richard Brautigan’s “cybernetic meadow where mammals and computers live together in mutually programming harmony… and all watched over by machines of loving grace.” Instead, it’s something Absolutely Other, a Lovecraftian something that “gnaws shapeless and ravenous amidst the muffled, maddening beat of vile drums and the thin, monotonous whine of accursed flutes.”