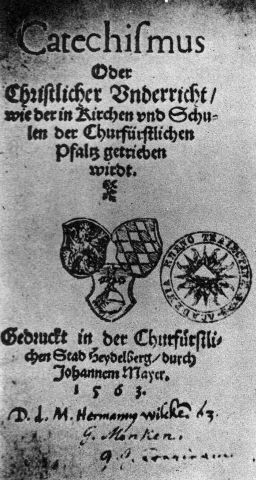 The first edition of the Heidelberg Catechism was published on January 19, 1563. If you know this little book well, then this reminder is enough to make you call to mind some of the best passages. If you know it less well, let this reminder move you to pull it from the shelf and refresh your memory. If you don’t know the book at all, then I get to be the first to tell you about a treasure, one of the best pieces of theology ever written.

It was written in the sixteenth century by a couple of young theologian-pastors named Zacharias Ursinus (1534-1583) and Caspar Olevianus (1536-1587). They did it at the bidding of Elector Frederick III, known as Frederick the Pious (1515-1560). Frederick had it published with a preface by himself: “My catechism, word for word, is drawn, not from human, but from divine sources, the references that stand in the margin will show. –If anyone of whatever age, station or class he may be, even the humblest, can teach me something better from the Holy Scriptures, I will thank him from the bottom of my heart and be readily obedient to the divine truth.”

It was published in German and Latin. Within 25 years it was available in Dutch, Hebrew, Greek, French, Italian, Polish, English, Lithuanian, Bohemian, and Romanian. After 1700 it really took off, and was translated into Indonesian, Singhalese, Tamil, Arabic, Tiv, Hausa…you name it, the Heidelberg Catechism has been made available.

What’s so great about the Heidelberg Catechism? Here are ten characteristics for you:

It’s Personal. “What is YOUR only comfort in life and death?” Sure, it contains the great, objective truths of Christian revelation, things that are true whether you believe them or not. But as a Reformation document written in interrogative form, it puts the question to you: What about you?

It’s Devotional. It is designed not simply to instruct you or exhort you, but to set you before the face of God, where you can say back to him who you are, what you need, who he is, and what he has promised.

It’s Biblical. The Heidelberg Catechism draws together biblical truth in very helpful summaries. Get an edition with the original scripture references in the margin, or if possible, get an edition that prints the text of those references at the bottom of the page for you.

It’s Ecumenical. Let me qualify that claim: Within the house of the Reformation, it was intended to be a document that Calvinists and Lutherans would both agree on. That “Protestant big tent” strategy really pays off throughout. As a sixteenth-century text, it certainly was not written to emphasize what Catholics and Protestants have in common; rather it was written to equip people to withstand the errors of Roman Catholicism in the doctrines of salvation and the sacraments especially. But most of the 129 questions cover the solid ground of “mere Christianity,” the great common central truths. Free church and baptistic readers will have to demur from a few of the judgments of the Catechism, most notably in the sacraments section. But it remains a solid and usable piece of work.

It’s Irenic. As opposed to polemical: Lovey, not fighty. Zacky Bear and C.O. … I mean, Zacharius Ursinus and Caspar Olevianus were not out to pick a fight. Whenever possible, they seek the calm, strong light of Christian truth more than the flame of controversy.

It’s Pastoral. Of course every Christian needs a real pastor in a real church, but this book provides the kind of counsel that is directly pastoral.

It’s Didactic. It is so well structured and carefully composed that it can teach you some serious theology. It would be hard to find a better theological education experience than simply working your way through these 129 questions intelligently, memorizing the key answers.

It’s Confident. Have you ever been asked a direct question about Christianity by an alert, inquisitive person, and found yourself drowning in a torrent of your own “ummms” and “uhhhhhs,” making weak and tentative statements hedged around with “like” and “sort of” on all sides? The voice of the Heidelberg Catechism is solid stuff. It knows things and says them confidently, giving clear and distinct answers to the questions: what is true comfort, what is faith, what do you believe, how do you know this, why do you say this?

It’s Dense. That makes it worth your time to memorize. Ursinus and Olevianus packed a lot of truth into a few words.

It’s Free. Public domain. Help yourself by helping yourself to it.

The Heidelberg Catechism has 129 question-and-answer exchanges. In my opinion, about two-thirds of them are astonishingly good, but none are better than the very first answer:

Q: What is your only comfort in life and death?

A: That I am not my own, but belong with body and soul, both in life and in death, to my faithful Savior Jesus Christ. He has fully paid for all my sins with His precious blood, and has set me free from all the power of the devil. He also preserves me in such a way that without the will of my heavenly Father not a hair can fall from my head; indeed, all things must work together for my salvation. Therefore, by His Holy Spirit He also assures me of eternal life and makes me heartily willing and ready from now on to live for Him.