Thomas Merton was born on this day in 1915. Merton’s autobiography Seven Storey Mountain has been a book that has helped many people find their way to Christian faith, or at least to feel the attraction of it. 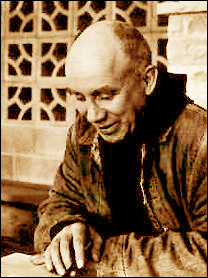 Merton’s persuasiveness came partly from his oddness: A well-educated cosmopolitan type who had lived a fairly dissolute life, he became a reclusive contemplative monk in Kentucky. No sooner was he hidden away in a life of solitude than he became a best-selling author carrying out a wide correspondence with leaders and intellectuals. In seclusion, he thought and wrote constantly about the global political unrest of mid-century. The further he went into his life as a Christian monk, the more he felt his vocation had something in common with Eastern religions. No wonder his books speak to a class of people who feel themselves to be boundary cases, misfits, and unlikely believers.

Merton is one of those authors who I enjoy reading short selections from, but who is increasingly off-putting the more I think about his life and persona. For me, the best Merton books have been not the sustained arguments and certainly not the autobiographical texts, but the devotionals that come in short doses. Seeds of Contemplation is the best, and here is a passage from that book that I find very insightful. It’s from chapter four, “We are One Man.”

Who can escape the secret desire to breathe a different atmosphere from the rest of men? Who can do good things without seeking to taste in them some sweet distinction from the common run of sinners in this world?

This sickness is most dangerous when it succeeds in looking like humility. When a proud man thinks he is humble his case is hopeless.

Here is a man who has done many things that were hard for is flesh to accept. He has come through difficult trials and done a lot of work, and by God’s grace he has come to possess a habit of fortitude and self-sacrifice in which, at last, labor and suffering become easy. It is reasonable that his conscience should be at peace. But before he realizes it, the clean peace of a will united to God becomes the complacency of a will that loves its own excellence.

The pleasure that is in his heart when he does difficult things and succeeds in doing them well, tells him secretly: “I am a saint.” Then he realizes that other people admire him. The pleasure burns into a sweet, devouring fire. The warmth of that fire feels very much like the love of God. It is fed by the same virtues that nourished the flame of charity. He burns with self-admiration and thinks: “It is the fire of the love of God.”

He thinks his own pride is the Holy Ghost.

The sweet warmth of pleasure becomes the criterion of all his works. The relish he savors in acts that make him admirable in his own eyes, drives him to fast, or to pray, or to hide in solitude, or to write many books, or to build churches and hospitals, or to start a thousand organizations. And when they succeed he thinks his sense of satisfaction is the unction of the Holy Spirit.

And the secret voice of pleasure sings in his heart: “Non sum sicut caeteri homines.”

Once he has started on this path there is no limit to the evil his self-satisfaction may drive him to do in the name of God and of His love, and for His glory. He is so pleased with himself that he can no longer tolerate the advice of another –or the commands of a superior. When some one opposes his desires he folds his hands humbly and seems to accept it for the time being, but in his heart he is saying: “I am persecuted by worldly men. They are incapable of understanding one who is led by the Spirit of God. With the saints it has always been so.”

After that he is ten times as stubborn as before.

Merton takes up the same thread again in chapter seventeen, “Freedom Under Obedience:”

The most dangerous man in the world is the contemplative who is guided by nobody. He trusts his own visions. He obeys the attractions of an interior voice, but will not listen to other men. He identifies the will of God with anything that makes him feel, within his own heart, a big, warm, sweet interior glow. The sweeter and the warmer the feeling, the more he is convinced of his own infallibility. And if the sheer force of his own self-confidence communicates itself to other people and gives them the impression that he really is a saint, such a man can wreck a whole city or a religious order or even a nation. The world is covered with scars that have been left in its flesh by visionaries like these.

However, very often these people are nothing more than harmless bores.