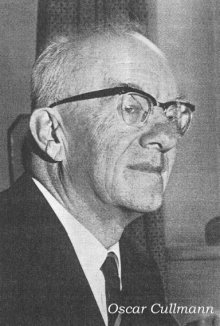 Oscar Cullmann was born on February 25, 1902, and lived until 1999. His most influential work was the book Christ and Time, in which he presented the biblical view of time and contrasted it with other theological ideas about time. According to Cullmann, the flow of time really matters to God, and the only way to think properly as a theologian is to understand how salvation history unfolds down to our own time. Cullmann made much of the notion of kairos, or time that is fulfilled and prepared. Many of the major theologians of the mid 20th century were also conjuring with similar ideas of heilsgeschichte and kairos, but Cullmann was an incisive thinker who was quick to point out where their ideas were inadequate. For example, he did a lot to keep “holy history” from being a different kind of thing altogether form normal history. He wanted to make sure it kept the place it has in the Bible: not a thing apart, but the true meaning and purpose of all history. Another prevalent misunderstanding of salvation history was the Bultmannian option of seeing kairos as being any time you are existentially serious. Cullmann hammered against this notion and insisted on real history that really mattered to God and man.

Cullmann applied the same incisive thinking in his controversial book The Immortality of the Soul and the Resurrection of the Dead, in which he teased apart the biblical hope in resurrection from the Greek idea that Soul is undying. There are some real problems with the book, but Cullmann’s virtuoso work with the New Testament and classical evidence makes it a powerful read. There is a big difference between Socrates’ proof that Soul exists after the body dies, and Paul’s confidence that the dead in Christ would rise and live again.

A final area in which Cullmann’s sharp mind made some necessary distinctions was in ecumenical thought. A Lutheran himself, he was an early participant in dialogue with other traditions of Christianity, and an invited guest observer at Vatican II. But as the decades of ecumenicism rolled along and talks of one giant unity church began to be heard, Cullmann started saying no a lot more often: He warned that such facile organizational unity was neither desirable nor faithful. You might say he was ecumenical when ecumenism wasn’t cool, and then stepped out of line with the movement as it became more established.