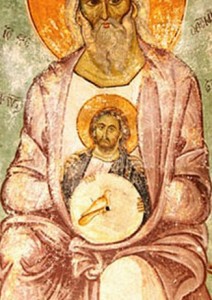 John 1:18 calls Jesus “the one who is in the bosom of the Father.” You can check out a lot of different translations at Biblehub  here (the Greek is ho on eis ton kolpon tou patros).

It’s a funny phrase, “in the bosom.” And by funny, I partly mean that it produces snickers from the youth group, and partly that it just isn’t the way we talk anymore. We might keep something “close to the chest,” or “take something to heart,” or “embrace an idea,” but we don’t talk about things being “in our bosom.”

Apparently it’s an odd expression in Greek as well. Overly literally, it’s something like “the one who is being into the chest of the Father,” which of course is no translation at all, but a telling exaggeration of the weirdness of the expression. Some commentators (Moloney, for example) have suggested that John is saying Jesus is “turned toward” the Father, just as in 1:1 the way he said the word was “with the Father” was to say that he was “toward the Father,” pros ton theon. Khaled Anatalios somewhere metaphrases this as “Godward,” saying that according to John 1, “Jesus is not simply God but, as Son of the Father, is a Godward God.”

If you wanted to bring the buried intimacies of John 1:1-18 to the surface, and you didn’t mind trading John’s mellifluous simplicity for some linguistic strangeness, you could say that the Godward Word of God was the one whose being was turned intimately toward the Father. Of course you could also just read the Gospel of John and see the intimacy of the Father and the Son worked out in living detail, but it’s nice to note that the prologue has already loaded up the categories as full as they can get.

“The Godward God turned toward the Father” is a bit much, and I’m not recommending it as a translation, but think how different an impression is made by “the Word was with God… he is at the Father’s side.” That’s the ESV and also the Holman Christian Standard rendering, and while it’s far more sober and defensible than what I’ve been doing here, it does seem rather cold by contrast. Tell me about the relationship between Jesus and God. “He’s with him, at his side.” Something’s been left out. I know “in the bosom” is an idiom, but an idiom for what? Besideness? It does make it sound like a bit of a Trinitarian sidehug.

I haven’t been able to think of the perfect translation for the expression. But it seems that John is working hard to communicate something about the intimacy of the Father and the Son here, something that is built in to the very being or character of the Son. That’s worth pondering because the Gospel of John is all about making known what the apostles beheld: not just the glory of God, but specifically the glory of the Son from the Father, full of grace and truth.