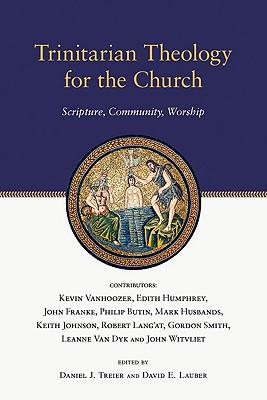 The Trinity was forgotten for a period of “centuries of doctrinal tragedy,” until suddenly in the middle of the twentieth century, theologians rediscovered it. Several decades after that ecumenical rediscovery, evangelical theologians are finally catching up.

“So goes the standard story,” say Daniel Treier and David Lauber, the editors of Trinitarian Theology for the Church (IVP, 2009), but they are keen to encourage some revisionism.

This excellent 2009  book is composed of 11 of the papers delivered at the 2008 Wheaton Theology Conference on the practical, ecclesial implications of Trinitarianism. The volume’s crisp editing reflects the way Treier and Lauber coordinated the conference itself, careful to include a wide range of contributors without losing the common focus. Some of the authors in this book still stay fairly close to the standard narrative, while others are sharply opposed to it. In their introduction, the editors warn of “the sloppiness of much enthusiasm regarding a trinitarian renaissance,” but are not willing to dismiss the trinitarian revival as all hype. The torrent of books and articles on Trinity in recent decades, after all, “may be a bit like the stock market: even if there are strong elements of hype, the perception itself comes to influence reality.”

There are no weak entries in this lineup, but the first three chapters win the “worth the price of admission by themselves” award. Chapters one and two are actually both by Kevin Vanhoozer, forming a sustained, sixty-page account entitled “Triune Discourse.” Vanhoozer starts out with the somewhat puckish question of whether the doctrinal statement of the Evangelical Theological Society is incoherent, since it specifies exactly two points: that the Bible is the inerrant word of God, and that God is a Trinity. By the time he is done interrogating this “extraordinary pairing,” Vanhoozer has articulated an inner unity between triunity and revelation, between the identity of God and the communicated, inscripturated knowledge of that God, which rises to the level of what he has called “first theology.” He concludes that the doctrine of Scripture is only truly “at home” when located in the Triune God’s economy of self-communication, and that the framers and revisers of the ETS doctrinal statement, perhaps despite their own intentions, have implied a great truth: “The Trinity is our scripture principle.” Readers seeking a very brief introduction to the influential Vanhoozer way of doing theology may find this the best place to start.

The other showpiece of the volume is Edith M. Humphrey’s wide-ranging biblical-theological essay, “The Gift of the Father: Looking at Salvation History Upside Down.” We tend to think of salvation history as starting with God the Father in the old covenant and then moving to the revelation and giving of the Son and then the Spirit in the new. Humphreys suggests inverting that order. It is only in the revelation of the Son, after all, that God is known to us as Father. Humphreys succeeds in shaking up some settled expectations about precisely how the Trinity is the content of biblical revelation.

There are many other solid performances in the book: Mark Husbands versus John Franke on the status of social trinitarianism, Philip Butin and Leanne Van Dyk on proclamation, and Robert Lang’at on missions. The final word goes to John D. Witvliet, whose concluding chapter asks “What to Do with our Renewed Trinitarian Enthusiasm,” which is certainly a live question whether the theological renewal has been over-hyped or not. Witvliet’s own answer, aligning with many other voices in this collection, is that in a variety of ways the church should be about “Forming Trinitarian Piety and Imagination Through Worship and Catechesis.” Trinitarian Theology for the Church is a fine resource to be used toward that very end.