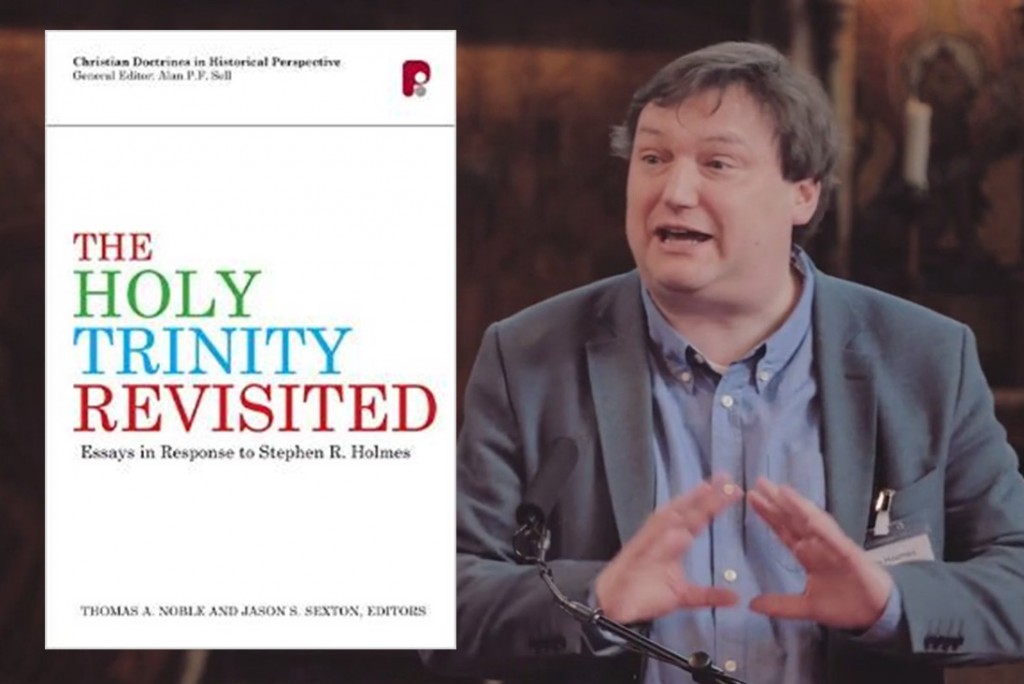 So, it’s ridiculous to divide the history of trinitarian theology into the periods before and after Stephen R. Holmes published his book The Quest for the Trinity. For one thing, that was just 2012, so the the post-Holmes period isn’t big enough to say much about. For another thing, Holmes’ book wasn’t that radical of a new take on anything; it was a very effective questioning of recent orthodoxies and a compelling case that they were at odds with older patterns of thought.

And thirdly, when you’re talking about something eternal like the Trinity, the silliness of getting caught up in movement-watching is especially conspicuous. But since this is a blog post, so I thought that for at least the title I’d treat the ups and downs of academic discussion like something epochal.

Because here’s a swell new book: The Holy Trinity Revisited: Essays in Response to Stephen R. Holmes (Paternoster, 2015), edited by Jason Sexton and Tom Noble. It’s a set of nine essays provoked by his 2012 book, along a substantial response from Holmes. So Holmes’ Quest for the Trinity does belong in a special category of books: it generated enough serious conversation to merit a book-length response. The responses are wide ranging and the discussion is ongoing.

Before you read these essays, of course, you ought to read the 2012 book. In that book, Holmes admitted to having been long under the influence of that mighty movement of “the new trinitarianism” of the late twentieth century, but to having turned a corner. He now claims that “the explosion of theological work claiming to recapture the doctrine of the Trinity that we have witnessed in recent decades in fact misunderstands and distorts the traditional doctrine so badly that it is unrecognizable.”

To put it at its most dramatic: what participants were used to describing as a glorious revolution and a quantum leap forward in trinitarian theology, Holmes re-narrated as “a catastrophic story of loss.” In his telling, the twentieth-century renewal of Trinitarian theology depended “in large part on concepts and ideas that cannot be found in patristic, medieval, or Reformation accounts of the doctrine of the Trinity.” In fact, some of the modern concepts were “explicitly and energetically repudiated as erroneous” by the earlier consensus. For all Holmes the historian knows, maybe the moderns are right and the ancients wrong. “But if so,” he warns, “we need to conclude that the majority of the Christian tradition has been wrong in what it has claimed about the eternal life of God.”

So Holmes cleared the way for at least a chastened view of the characteristic twentieth century trinitarian discussion, and if his chastening gets chastened a bit as various scholars counter-argue with him, all the better.

I got to write the first essay in the book, and here’s part of what I said:

In what follows, I would like to consider where we stand now theologically if Holmes is right in his main judgments, and what sort of shape the next wave of constructive trinitarian theology ought to take. What follows are notes for the kind of constructive trinitarian theology that is possible and necessary in the new situation brought about by the successful counter-revolution, that is, trinitarian theology post-Holmes. I hope it is obvious that in taking Holmes as the dividing line between the two ages, in describing the course of modern trinitarianism as the epochs pre-Holmes and post-Holmes, I do not mean to suggest that he has single-handedly changed the history of trinitarianism, or even its historiography. The Holy Trinity is a remarkable book, but not that remarkable! What Holmes has accomplished in this eminently timely book is to focus and articulate a backlash against the recent orthodoxies of the trinitarian revival, a backlash that has been developing in a more diffuse way for some time now. If one were to seek another symbolic culminating point for this backlash, it might be 2012’s rather massive Oxford Handbook on the Trinity, edited by Matthew Levering and Gilles Emery.

And in the months since writing that, I could now add as a third symbolic point the volume Advancing Trinitarian Theology, from the meeting of the Los Angeles Theology Conference that suggested various ways forward.

The short version of my argument: trinitarian theology going forward should be more explicit in its biblical argumentation, give more attention to the divine unity, and accept some help from classical theism via analytic theological tools.

But there are 8 other chapters, including

*Jason Radcliffe on whether including Torrance in the story would have changed it (answer: yes)

*Michael Bird on the biblical foundations of the doctrine

*Graham Watts with the most direct questioning of Holmes’ historical claims

All of these are well done; most are very interesting; some I would call important for the current discussion of the doctrine.