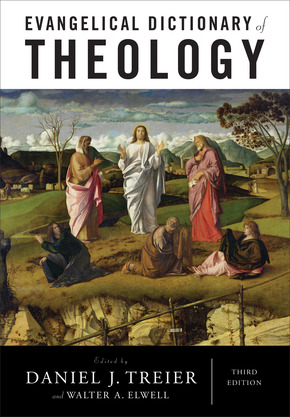 The Evangelical Dictionary of Theology has just been published, and it’s a marvel. A big hardcover weighing in at just under 1,000 pages, it is a wisely-planned compendium of theology and spiritual life from an evangelical perspective. Every time I try to shelve it near my desk as a handy reference work (which it is), instead I flip through it and find something that catches my curiosity as if it’s some kind of gigantic collection of interesting articles (which it is). It keeps living on my desk instead of my shelf for the time being. Highly recommended; pick this thing up.

Here are a few key paragraphs from the article, to give you a sample of what’s in the volume.

On the doctrine as a biblical mystery:

The Trinity is often called a mystery, but those who use this word should first of all acknowledge its NT sense: something long present but late revealed. Paul proclaims “the revelation of the mystery that was kept secret for long ages but has now been disclosed” [Rom 16:25]; “the plan of the mystery hidden for ages in God… now made known” [Eph 3:9-10]. Because Paul is speaking directly about the work of the Son and the Spirit, he is also speaking indirectly about the doctrine of God. Because the Trinity was not made known until God sent forth his Son and Spirit in the fullness of time [Gal 4:4-6], the accomplishing of salvation in history was the condition for communicating doctrinal truth. Hence it is primarily promised and foreshadowed in the OT but is analyzed and indicated only in the NT. It is traditional to say that God’s triunity is adumbrated –literally, “shadowed forth”—in the OT. Adumbration is not revelation.

On the way the early church developed technical terms to help them interpret what was revealed in the Bible:

The canonical dynamic of the biblical material was the main factor to determine the direction the doctrine took in the early centuries. The early church grew increasingly skillful at drawing the implications of a biblical witness that started with the one God and saw that oneness unfold into a threefold unity of Father, Son, and Holy Spirit. In a wide variety of ways, theologians gained fluency in speaking of God as one and as three; considered from outside (the one God) and from inside (the three persons); described absolutely (a single being) and relatively (Father, Son, and Spirit in relation). The key idea was that what happened in Christ and the Spirit was of ultimate significance for identifying the one true God, yet it was not a change in God’s identity. In need of nouns, theologians soon enough settled on the terms “one being in three persons.”

Important guidelines for speaking well about the Trinity:

Following Scripture’s own usage, Christians have always appropriated external actions of God to a single person of the Trinity. The Apostles’ Creed, for instance, calls “God the Father almighty maker of heaven and earth,” although creation is the work of the entire Trinity. Likewise, Father, Son, and Holy Spirit are sometimes loosely called Creator, Redeemer, and Sanctifier, even though, strictly speaking, it would be a doctrinal error to exclude the other two persons from any of those works. At its best, this flexible usage may reflect the way a deep intuition leads Christians to identify various persons of the undivided Trinity with particular divine actions or attributes that have a certain fit or aptness with their trinitarian character. However, these intuitions ought to be guided by Scripture’s own usage whenever possible. An unguided imagination may mistakenly associate justice and wrath to God the Father, relegating mercy and forgiveness to Jesus the Son, and vague spirituality in general to the Holy Spirit. The Bible speaks in a better way of the Father, Son, and Holy Spirit, and the doctrine of the Trinity should guide Christians into a deeper participation in its way of speaking.

Get a copy of the Evangelical Dictionary of Theology and read the rest of the entry, starting on page 898!