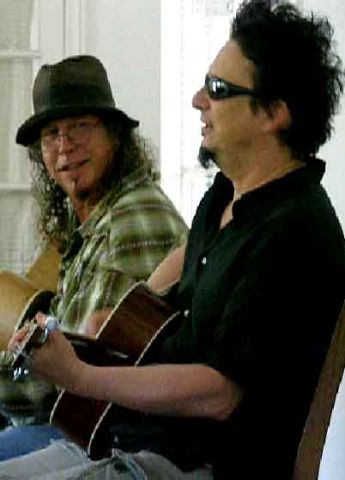 Taylor and Roe are both accomplished singer-songwriters in their own rights, and over their years of touring and recording together, their collaboration has morphed into a symbiosis. Sometimes that’s a beautiful thing, as when they take turns singing lead vocals or easily pass the guitar work back and forth with a “why don’t you play this part” nod of the head. Other times, their symbiosis is some kind of eerie mutual parasitism: they bicker “like old married people” who have already had every possible argument but can’t help having this one in front of you for comic effect.

The audience, just a few feet away from the performers, was made up of college students who didn’t know Taylor and Roe’s music at all but could tell from the first notes that they were in the presence of The Real Deal. Taylor has a knack for writing lyrics with a miniature punch line every couple of lines, and the audience was right there with him, laughing along. But Taylor also has a knack for writing lyrics that draw you in to attend to the most important things, and as we listened we went from amusement to amazement, holding our breath to hear the words being spoken to us. Mike Roe’s stunning vocals range from falsetto to a credible barbershop bass, and his mastery of dynamics puts him in charge of the whole room. There are only so many sounds you can make with a guitar, but Roe squeezes them all out.

It was a great afternoon of rootsy music, goofy jokes, bizarre stories, and reflections on life, faith, and art.

With hundreds of songs to choose from, Taylor and Roe put together a strong set:

We called them back for an encore, and got the obligatory folk-band Civil War song:
In the Distance
followed by a song from 1976, considerably before the birth of most of the audience:
Ain’t Gonna Fight It

That was the end of the wonderful concert, and students crowded around to buy some CDs afterward. Somewhere in the mix of goodwill and afterglow, one of the students (hi, Phil!) convinced the guys to get their guitars back out and play a song for him to accompany them on with his fiddle. They chose a short, slow piece, Crushing Hand, and it went so well that they gambled on one of their signature songs, the many-versed story-song Built for Glory, Made to Last. It was a great post-encore bonus for those of us still around, so good that a hootenanny was narrowly averted.