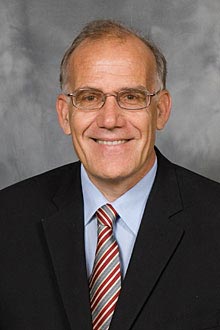 Victor Davis Hanson spoke twice at Biola University on October 8. His afternoon lecture was on one of his specialties, the History of the Peloponnesian War by Thucydides.

Reading Thucydides has been a standard assignment for students in the Torrey Honors Institute for a long time. But it’s a rare student who feels love at first sight for this admittedly dry, moralizing, pessimistic historian. Several years ago, the annual lamentation of the freshmen suffering under Thucydides got so loud that the faculty admitted it was either time to cut Thucydides from our classics curriculum, or find more effective ways of helping our students get into the text. We opted for the latter. 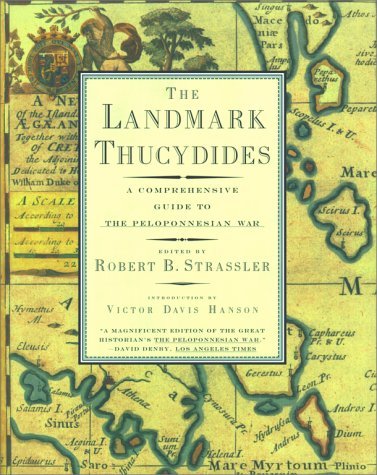 The first step in that direction was to ditch our minimalist translation and opt for a deluxe edition: a bells-and-whistles edition of Thucydides with maps on the pages, charts and diagrams, time-lines, running explanatory notes, a glossary, and any other reading aid that might help. The logical choice was The Landmark Thucydides, edited by Robert B. Strassler, with an introduction by, yes, Victor Davis Hanson.

At Thursday’s lecture, I saw students and faculty carrying their Landmarks, and a couple with copies of Hanson’s own War Like No Other. Hanson, a native Californian with a PhD in classical philology and long experience in teaching history, spent about forty minutes wondering out loud about why people still read Thucydides after all these centuries. Why do 70,000 copies of The Pelopponesian War sell annually in the U.S.?

Hanson answered his own question by rehearsing the perennial relevance of the three reasons Thucydides wrote the book: first, to document not simply a military encounter but the clash of two cultural systems: the Dorian oligarchic land power versus the Ionic democratic sea power. Second, to trace the rise and fall of Athens, as its founding generation passed the torch to a middle generation who reached heights of cultural achievement which are still admired, and on to a third generation who let it all be torn down within a few decades. Third, Thucydides wrote to communicate a view of human nature that is frankly pessimistic, reckoning with the destructive urges in the hearts of all humans and indicating the kind of restraints that any wise government will put in place.

Hanson moved through this material (to which I have not done justice in this brief summary) effortlessly but with characteristic passion. He then took questions from the audience for about thirty minutes. The questions were good (says the proud professor), but his answers were luminous: a simple student question about Thucydides’ view of rhetoric gave Hanson an opportunity to explain how the possibilities that the Greek language has for abstract expression were vastly extended and refined by the sophistic educational program, and how Thucydides profits from that enriched linguistic resource while also warning about its dangers. In one of the final exchanges, Hanson shared some insight from his own early scholarly training, about choosing a field of study, weathering difficulties, and doing honest good work.

Hanson himself certainly brings a legacy of honest good work to the task of understanding Thucydides. He is a prolific scholar and political commentator, and his analyses of contemporary politics is deeply informed by his understanding of Thucydides. A common structure for a Hanson column is to begin with the latest news from Iraq or the latest spin from the press, relate it to something from classical history, and then make the return trip to today. It’s never a meaningless detour: Hanson is consistently able to help us see the connections, and it was illuminating to get to see him do it in person.

Note: both Victor Davis Hanson lectures will be available as Podcasts from The Scriptorium Daily in the near future.