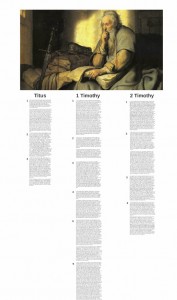 This will be weak, even for a blog post, but I wanted to jot down three questions that are lingering in my mind after about six months of reading and teaching the pastoral epistles.

I find all three questions mildly unsettling, but not for the historical-critical reasons that are supposed to unsettle evangelicals. I take Titus and 1 and 2 Timothy to be by Paul, and the questions only become interesting for me on that basis.

1. Hellenistic Moral Vocabulary. What led Paul to take up the task of appropriating the moral vocabulary of Hellenistic ethics? Why do lists like “temperance, justice, holiness, piety,
sobriety, self-control,” and being “of good reputation” become the key words for Paul’s account of the life of Christians?

Very little in his earlier writings suggest that he is moving toward this task. There’s an extensive vice list in Romans, but it’s stabilized by the ballast of his theological argument, especially from the Old Testament. This is precisely the kind of close argumentation from Scripture that is absent from the pastorals. Philippians also comes close, with “whatever is true, honorable, commendable,” etc. But one of the key things Philippians is about is redefining what those virtue terms mean, in light of Jesus Christ’s voluntary embrace of servanthood and death (see Joe Hellerman’s Reconstructing Honor in Roman Philippi: Carmen Christi as Cursus Pudorum). The pastorals are not marked by these “christianizing” phenomena in their use of the Hellenistic vocabulary. Contextual answers, for instance that Paul is writing to Titus the Greek and Timothy the half-Greek, are unsatisfying. I want to understand the material, properly theological motivation for this act of appropriation.

2. The Church’s Reputation.  What is the meaning of Paul’s concern for how outsiders see the church? Lately I’ve been irritated with the way churches seem obsessed with what outsiders think of them. Possibly I’m suffering from middle-age grumpiness, but I often wish Christians would quit surveying non-Christians to see if the non-Christians think the Christians are Jesusy enough. But I’m chastened by the pastoral epistles, where Paul seems quite concerned for the church to maintain a good reputation with outsiders. It even seems to me that the dominant note in his lists of qualifications for elders and deacons is the note of respectability and good reputation in the wider community. It seems we should care about this, and plan for it.

3. A Beautiful Life of Good Works. Whatever the reasons, Paul’s account of Christian holiness in the pastorals finds expression in virtue lists that picture Christians as becoming simply lovely. Their behavior shines forth resplendently and attracts their neighbors to its beauty. Czeslaus Spicq’s book about Paul’s moral theology (a book decisively shaped by  Spicq’s deep immersion in the pastorals) describes the Christian this way: “For him, to obey truth, to do good, to live in beauty were one and the same thing.” The “good works” so prominent in the pastorals are codified in the virtue lists, which are catalogs of human goodness, of moral success, of excellence in ethical behavior. My ongoing question about this is how it goes together with the utterly penetrating Christian awareness of sin and forgiveness, of neediness and rescue, of a life in the shadow of the cross. With permission to turn aside to other biblical voices, even other Pauline texts, I know how to put the whole package together. John Webster’s recent meditation on the fruit of the Spirit is exemplary: we must “perceive that what at first glance is a simple list of virtues is only intelligible when we grasp that it rests on the foundation of gospel indicatives.” Just so: Titus knows that we are saved “not because of deeds that we have done in righteousness, but because of his mercy.” But the shadow of the cross doesn’t fall across the message of the pastorals in quite the same way that it falls across the rest of Paul’s writings. I continue to feel the need for a deeper understanding of what the Spirit is saying in these texts in particular, with their peculiar lights and shades.