To interpret the Bible correctly, one of the skills you need to develop is the ability to discern the voices of God the Father and God the Son, speaking about each other and to each other, in the words of the Old Testament. Without this skill, a reader will fail to perceive many things, and will misconstrue much of what is perceived. I suppose this could be demonstrated by working in either direction, arguing forward from the Old Testament to the New, or backwards from the New Testament to the Old. But a promising place to pick up the trail is with Jesus’ interpretation of Psalm 110. In Mark 12:35-37, Jesus is teaching in the temple, and asks:

How can the scribes say that the Christ is the son of David? David himself, in the Holy Spirit, declared, “‘The Lord said to my Lord, “Sit at my right hand, until I put your enemies under your feet.”’ David himself calls him Lord. So how is he his son?

One of the main lessons I draw from this passage is: Never, ever, ever get into a Bible fight with Jesus. But there’s more to it than that. Although Jesus’ main point here is that the Messiah is greater than David, Jesus (“great David’s greater son,” as the hymn says) proves it in an interesting way: by showing that David himself must have known it, since this oracle has David calling somebody his lord. In fact, the person talking to David’s lord is the LORD, the God of Israel. So the oracle of Psalm 110:1 looks something like this: 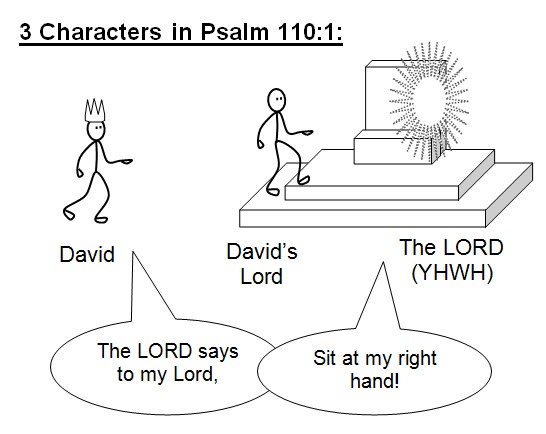 (Apologies for representing God by a little sunburst, but it’s a placeholder for a diagram, not –I hope– a likeness) And along the way to making that point, Jesus’ argument picks up some collateral value: it shows that the oracle in Psalm 110 is an instance of the Father speaking to the Son. Nor should it be a surprise to readers of Mark’s gospel that the oracles of the Old Testament are the living voice of the Father speaking to the Son: Mark begins his gospel by quoting Isaiah’s report of God telling his Son, “I send my messenger before your face to prepare your way” (the words are actually shaped by Exodus 23:20, Malachi 3:1, and Isaiah 40:3; details here).

Once you’ve been alerted to this phenomenon, you begin to suspect it’s going on more than you’ve previously noticed. There is plenty of evidence in the New Testament that Jesus prayed the Psalms, saying the words of those ancient prayers to his Father. And there are moments when the New Testament puts the words of a Psalm on the lips of Jesus as the meaning of his ministry: “Sacrifices and offerings you have not desired, but a body you prepared for me. Behold, I come to do thy will, O God,” or “In the midst of the congregation I will praise you,” or “I will put my trust in him” or “the reproaches of them that reproached you fell on me.” Please don’t take my word for it; take up and read.

The first half of Hebrews, in particular, seems almost designed to be a workshop in learning how to read this way.

Scholars have recognized this kind of reading, so fruitful for trinitarian theology, and given it the name “prosopological exegesis.” It’s a mouthful of a name, but some technical term is necessary to identify it as a mode of reading quite distinct from the more widely recognized categories like allegory and typology (or, more recently, “figural reading”). It is quite different. Marie-Josèphe Rondeau says it “consists in asking about the identity of characters portrayed, especially the identity of the character who speaks.” The slogan for it could be the question the Ethiopian eunuch asks Philip in Acts 8 after reading Isaiah 53: “About whom, I ask you, does the prophet say this, about himself or about someone else?” But prosopological exegesis is especially interesting when it pushes further than “who is it about” to the questions, “who is talking, and to whom?”

Rondeau quotes Hilary of Poitiers’ directions on Psalm-reading: “The primary condition of knowledge for reading the Psalms is the ability to see as whose mouthpiece we are to regard the Psalmist as speaking, and who it is that he addresses.” Indeed, prosopological reading is especially fruitful in the book of Psalms (Rondeau’s project was a study of patristic Psalms commentaries: Les commentateurs patristiques du Psautier (IIIe-Ve siecles) 2: Exegese prosopologique et theologie (Rome: Oriental Institute, 1985)).

One of the exciting things about prosopological exegesis is that although the best initial work on it was done by patristics scholars (a landmark German article by Carl Andresen in 1961, Rondeau’s French commentary in 1985, and an excellent English article by Michael Slusser in 1988 that includes brief discussion of Andresen and Rondeau), it is now being picked up by biblical scholars. Recent commentators on Hebrews have engaged some of the terminology. But the most thorough work on it I’m aware of is Matthew Bates’ book about Paul, The Hermeneutics of Apostolic Proclamation (Baylor, 2012), where he carefully reconstructs the way Paul expounds Old Testament passages by identifying speakers in some surprising ways.

I’m glad to have Bates’ careful study of Paul, because it helps show how pervasive prosopological exegesis is. But I think the hot spots for this reading technique are Hebrews, which guides the reader in how to do it, and the Psalms, which hold out a constant invitation to readers to hear the voice of God the Father and God the Son speaking in the Holy Spirit.