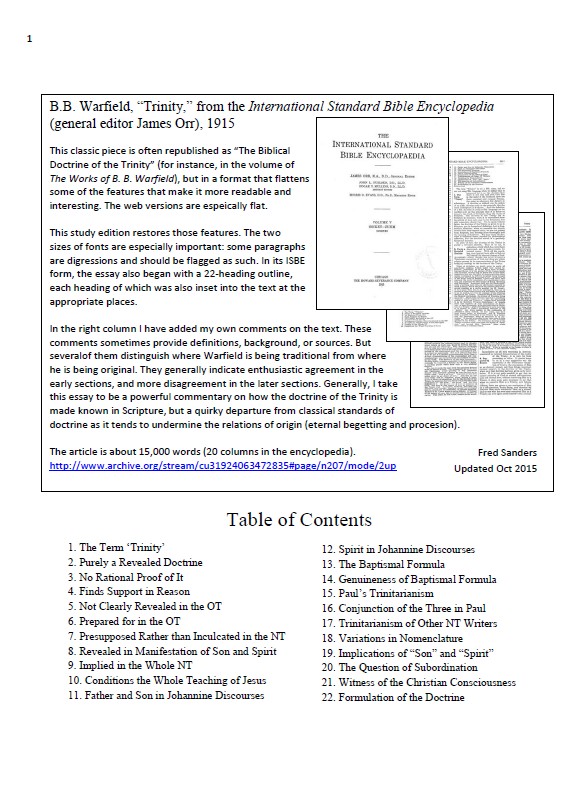 B. B. Warfield was commissioned to write the entry on the Trinity for the 1915 International Standard Bible Encyclopedia. The substantive entry (about 15,000 words, running for 20 columns in the ISBE) has been very influential, partly because it was incorporated into a well-regarded reference work, but mainly because of the high quality of Warfield’s writing. A hundred years later, it still stands up pretty well. And it’s freely available around the internet under the title “The Biblical Doctrine of the Trinity,” (the title it was given when it was reprinted as a stand-alone essay in the Works of B. B. Warfield). In fact, its availability on the web has given it an even wider sphere of influence than it had before.

When I teach a course on the Trinity, I routinely assign this essay, and I’ve even gone so far as to require students to read it twice in the course –because even the best students miss about half of what Warfield’s doing the first time through. He’s famous for being a bit hard-headed, but in this essay (as in several others where he combines biblical studies with dogmatics) he is in fact understated and subtle.

Somewhere along the way, I discovered that the essay is vastly more readable in its original setting in the ISBE, because it has two different sizes of type, a running summary inset from the margins, and just shouts “I am an encyclopedia entry!” in a way that helps students track with its self-imposed tasks more readily. So I created a document that restored those features to it, and the people rejoiced. And then I added a few sidebar notes to explain foreign or archaic phrases, and couldn’t resist annotating a few places where Warfield alludes to, but does not cite, a source. And then once I was in explainer mode, I went ahead and spelled out some of his arguments. Over the years I’ve added and subtracted notes based on student responses, but the general tendency has been to add: the annotations have now grown into a tiny essay of my own running alongside Warfield’s.

I’m making that annotated edition of Warfield’s essay available here now (click on the picture of it above, or here for the Warfield Trinity Study Edition).  Help  yourself.

One thing you may notice about the drift of the annotations: They start out with enthusiastic agreement and then tend toward disagreement. The reason is that, in my judgement, the early parts of the essay are magnificently helpful, while the conclusion swerves off course in a few ways. When I think of this essay, my immediate response is gratitude: the way Warfield describes the revelation of the Trinity in the economy of salvation and its canonical witness in Scripture is revolutionary. My first reading of it was an intellectual and spiritual event for me. I probably can’t even fathom all the ways this aspect of the essay has helped me put together my own approach to teaching the doctrine of the Trinity in a way that is transparently biblical and keyed to the main, central points of the gospel.

But if I reflect further on the entire essay as it stands –that is, not just on what it did for me, but more objectively on what it contains and on what others might therefore take from it– I wince to recall that Warfield bends his powers to keep the exegetical case from supporting the traditional Nicene doctrine of the eternal generation of the Son and procession of the Spirit. He pulls his punches on the meaning of the terms Son and Spirit; he cordons off the economy of salvation as the only place where we can be certain that the second and third persons come from the first; he gets stingy with how much is revealed in the order of operations among the three; he overloads covenantal categories in order to bypass ontic categories; he comes within a hairs-breadth of affirming a merely messianic sonship; and for the life of him he can’t imagine how anybody could reconcile eternal relations of origin with absolute equality of persons. Never mind that the Nicene Creed and the Westminster Confession of Faith both instruct him otherwise; here he forges his own way ahead, and his overall trinitarianism fares the worse for it, more anemic than it needed to be after the vigor of his biblical proof.

For all that, I can’t stay mad at Warfield and his essay. I do recommend the essay itself, and I will continue to make constant use of the lessons I learned from it. One reason I’m making this annotated version available is to disseminate Warfield’s own work with a few helps. The other reason is to attach a little bit of cautionary guidance in the form of my longer notes, which I hope may help as a prophylactic against the devolutionary tendencies of some of his conclusions.