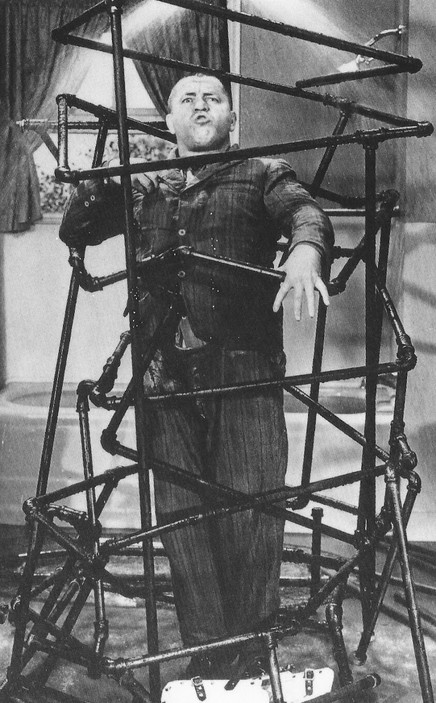 I’ve spent a little time this summer with contractors and plumbers and concrete guys and appliance repairmen, and by “I’ve spent time with” I mean “I’ve been paying.”

Like most things that aren’t theology, it has reminded me of theology.

There’s a dynamic that occurs whenever you bring in a repairman: He takes a look at the job, figures out the problem, sketches the solution, and estimates the cost. But then another phase of the work, apparently equally necessary, begins: the Cursing of the Previous Contractor(s).

Have you noticed this? It seems like a repairman can’t start working until he has roundly condemned the previous repairman. It’s not enough to say, “I would have done this differently,” or “there are three approaches to this kind of problem, and while I prefer A, this person seems to have chosen C.” No, the previous repairs must be utterly denounced as wrongheaded in conception and bungled in execution. The technician who was here before was a trousered ape, a traitor to the manual arts, a criminal psychopath who tortures houses for fun. What was that mouth-breathing, knuckle-dragging chucklehead thinking? What a cheap, shortcut-taking, counterproductive, maladroit hack of a bungler. What a total idiot.

Having directed several moments of ritual hatred toward this absent malefactor, and having performed the proper incantations of vituperation (“Troglodyte! Vivisectionist! Bashi-bazouk!” and “Utter fool! Foreign translation! Stool pigeon! Mountebank!”),  the new handyman turns a sharp corner and begins the phase of Consolation and Hope: NOW you’re in good hands. You’ve chosen the right person now, and from here on in, everything will be reputable, standardized, state of the art, and code compliant. 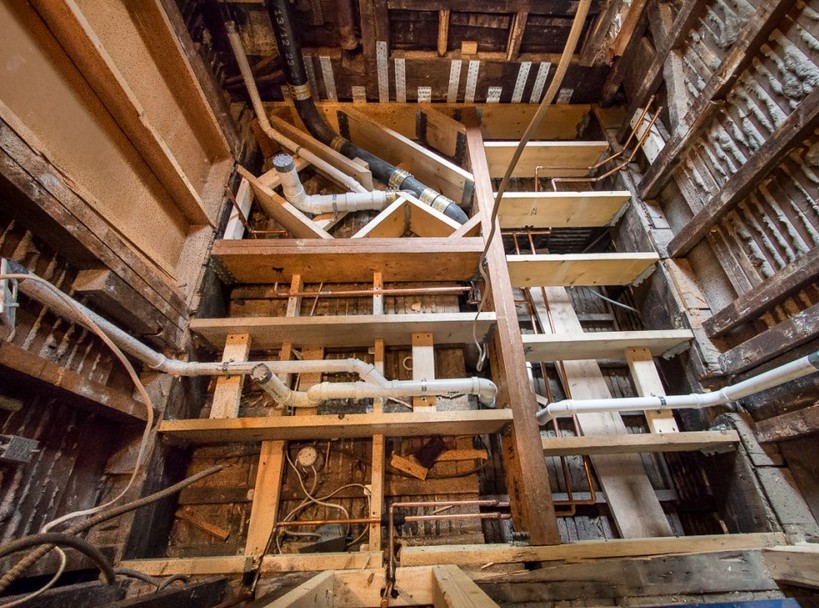 Photo from Trimitsis Woodworking, who believe carpenters & plumbers can live in peace.

The net result of all this retrospective trash-talking is obvious: I grow progressively skeptical of all contractors, all handymen. Apparently there’s an industry-wide strategy of badmouthing each other after the fact. Everyone who follows this strategy wins a few bonus points over previous players, but burns the industry.

And that’s where it starts reminding me of theology, especially the kind of theology geared for public teaching. Some theologians adopt the same rhetorical tone when disagreeing with other theologians or traditions. They don’t say, “well, there are several opinions about that, and what you’re describing is A, while I’m persuaded by C.” They don’t attempt to get inside the mind of the other view, or try to explain sympathetically what previous teachers must have been thinking. Instead they trash the other view, and then assure listeners that NOW they’re getting the real story.

Of course theologians have to teach the truth as they understand it, and that requires refuting errors. I don’t think it helps anyone to pretend nobody’s ever wrong and after all aren’t there four views of everything and who’s to say what’s right with all our modern ideas and products bla bla bla. Truth has edges, and you can’t teach a doctrine without showing the errors that lie beyond the bounds.

But what I’ve learned from this home repairs thing over the years is what it feels like to be on the non-expert side of things. When a contractor starts badmouthing previous contractors, I am rarely growing in my knowledge and understanding of the repairs in question. Sometimes that does happen: a good explanation can show me that the concrete isn’t level, and why that matters, and how hard it will be to fix relative to how easy it would have been to do it right the first time. But the more that explanation shifts its focus from the actual material, and shades off into badmouthing the previous worker, the more it forces me to focus on the personalities involved. When that happens, I as a non-expert have to decide not about the subject matter itself, but about who I like better, and generally I like the person talking to me at the moment. But next year I’ll like the next guy. And eventually I’ll consign all the contractors to the category of “you can’t really actually trust these guys because the next one will refute the current one.”

Theologians and pastors, whether in person or in print, ought to bear this in mind when explaining doctrine. Explain sympathetically what previous teachers or traditions were trying to do (hint: they were usually attempting to construe Scripture, so even if they ended up with some wrong answers you can always start there). Explain doctrines and differences in such a way that your listeners focus their attention on the subject matter rather than the personalities. Because if you make it about you versus the previous craftsman, you’re likely to win the popularity contest. But that’s a temporary victory. You’re also likely to burn the whole industry, and that burn lasts longer.