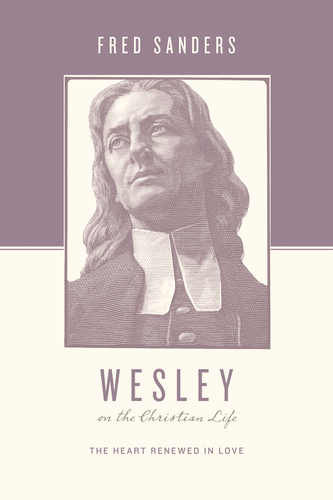 I forgot to make an actual, official announcement here at Scriptorium of the late-summer publication of my book Wesley on the Christian Life: The Heart Renewed in Love. It’s the latest entry in Crossway’s fast-growing Theologians on the Christian Life series, and it comes recommended by Wesleyan heroes like Robert Coleman and Timothy Tennent, as well as Reformed stalwarts like Carl Trueman and Michael Horton.

So here’s the official announcement and prompt: buy my book!

The cover features a dreamy portrait of John Wesley looking like a movie star, by Mark Summers. I love how Crossway commissioned these cover images that don’t simply re-hash or re-crop the available historical portraits of these theologians.

Wesley on the Christian Life spends one chapter on the life of John Wesley, but the bulk of the book is an exposition of what he taught about salvation, spirituality, and discipleship. I emphasize the things Wesley himself emphasized in his published and authoritative writings: the Standard Sermons, the Explanatory Notes Upon the New Testament, and the Methodist Hymnals. The picture of Wesley that emerges is of a preacher and organizer devoted to bringing nominal believers to actual conversion. In his teaching he pressed the topics of regeneration, justification by faith alone (a justification that includes the imputation of Christ’s righteousness), and a progressive sanctification characterized by “an optimism of grace.”

The most novel argument in the book is that we should think of Wesley as the theologian of First John. Without turning his back on the Pauline emphasis that marks all evangelical Protestantism, Wesley’s theological home base and characteristic ways of thinking are guided instead by the apostle of love, especially as expressed in First John.

I also hid secret messages in the text (more on that in a later post).

Without trimming his message, I try in this book to describe Wesley in a way that Reformed believers will be interested in and drawn to. I was gratified by one early review by a Reformed pastor who said that he had always considered Wesley a “no-zone” for people like him, but that “after reading Wesley on the Christian Life… I have since repented of my theological bigotry.”

Here are a couple of podcast interviews that I’ve already done: one with Jonathan Armstrong at the Aqueduct Project, and a brand new one  with David Grubbs at The Christian Humanist (blog post, podcast).