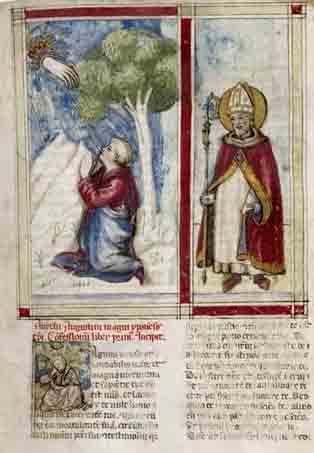 For Augustine, writing the Confessions didn’t just mean telling (confessing) all his sins. He took “confession” as the title of his work precisely because it has such a wealth of meanings: It means to speak forth the praise of God (“confess that you are great”); it means to acknowledge something (“confess the Lord Jesus,” see Matt. 10:32 KJV and Latin); it means several other things that shade into each other and are the source of much Augustinian wordplay throughout: “I confess to you who took pity on me even when I did not yet confess.”

But it also meant to name his sins, admit their sinfulness, and repent of them. By the time he wrote his Confessions, he was a respected bishop and an important public figure, so it wouldn’t have been appropriate for him to be explicit about some of his transgressions. Still, in the Confessions he prayed his way through nine books of his own stupidity, rebellion, lust, arrogance, ingratitude, and selfishness.

In a crucial early section of Book II, Augustine reflected so profoundly on the theft of a few pears that he created a masterpiece of introspection. Provoked by what was admittedly a minor act of theft (or vandalism, really, since Augustine and his friends didn’t even want to eat the fruit), Augustine drilled down into the nature of evil and hit metaphysical bedrock (“In their perverted way all humanity imitates you”). It’s an unforgettable scene, a revelation of the sinfulness of sin.

What it accomplishes in the overall flow of the Confessions is to draw our prurient interest away from the details of Augustine’s biography. If he’s brought us face to face with sin in the act of pear-theft, he doesn’t have to narrate any details of his later sins to increase our understanding of his sinfulness, or of ours. In fact, the pear story falls into Book II of the Confessions in this outline:

ii. Clouds of muddy carnal concupiscence filled the air; The bubbling impulses of puberty befogged and obscured my heart; I couldn’t tell the difference between lust and love.

iii. At age 16, my family ran out of money and I took a year off of school. I had too much time on my hands. I made a bad set of friends. There was no family discipline to hold me back from doing what I wanted.

iv. I stole some pears!

It hardly takes a Freudian to perceive that Augustine isn’t talking about pears when he talks about pears.

Augustine is clear in the Confessions that he was a sexual sinner. He says so in cold print, and anybody who joined pastor Augustine’s church knew that pear-thieving wasn’t the worst thing in his background. But Augustine knew how to write about it without distracting his readers from the theological meaning of his autobiography.