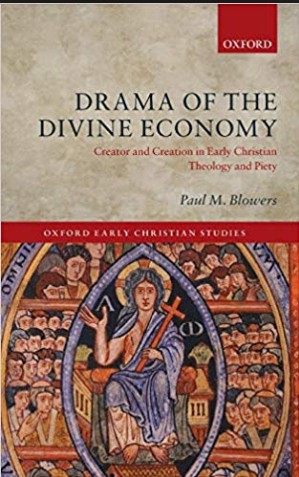 In the first couple of pages of Paul Blowers’ fine book Drama of the Divine Economy: Creator and Creation in Early Christian Theology and Piety, he explains something important about his subject. Reading early Christian theologians on the subject of creation, we find them doing too many things all at once. Some readers will find this frustrating and distracting; others will find it intoxicating and evocative. But whatever your reaction to the phenomenon, it’s definitely there: when they write about creation, they write about everything all at once. In particular, they write about God and humanity and salvation and eschatology.
The word creation, as Blowers points out, has a lot of meanings:

“Creation” evokes different things: the initial divine action of creating, the created world as a fait accompli, the “otherness” and “createdness” of the cosmos in relation to its uncreated Creator, the divine work of preserving and renewing the created world, and more. All are important and mutually inextricable in Christian understanding. The “doctrine of creation” in the early church is in turn a multiplex, indeed kaleidoscopic construction. (1)

So early Christian discourse about creation includes more than we usually expect:

It includes not just the origins of the world (cosmogony) and the nature and structure of the universe (cosmology) but also properly theological considerations about the precise relation of the triune Creator to the time-bound creation and the ontological chasm (diastema) that separates them while also constituting the frontier, as it were, of their enduring interaction and communion.  (1)

Even if a reader attempts to isolate the doctrine of humanity from this creational manifold, the saturated and kaleidescopic character of the doctrine keeps showing up:

Additionally, there are integral issues of theological anthropology, since the origin, vocation, and destiny of humanity constitute for many patristic thinkers a microcosm of the drama of the universe. (2)

Christology and soteriology, Blowers points out, are not topics to be put aside and taken up later; instead, they are the “focusing lens… in the early Christian vision of creation.” (2) In short, for early Christian writers, “creation was confessed not in isolation but in a normative relation to God’s overall salvific action in the world.” (2)

Again: “Writers throughout the patristic age rarely, if ever, undertook straightforward expositions of cosmogony, metaphysics, physics, astronomy, etc. in isolation from ulterior theological and didactic concerns.” (3) The sermonic and salvific element is there on purpose. In modern idiom we might say patristic creation theology was existential, or at least that the story of salvation is hermeneutically present in the situation of the reader, and these authors more or less knew it. In Blowers’ telling, as early as Origen we get “what is best termed “moral cosmology” and, more broadly, “theological cosmology.”  (3)