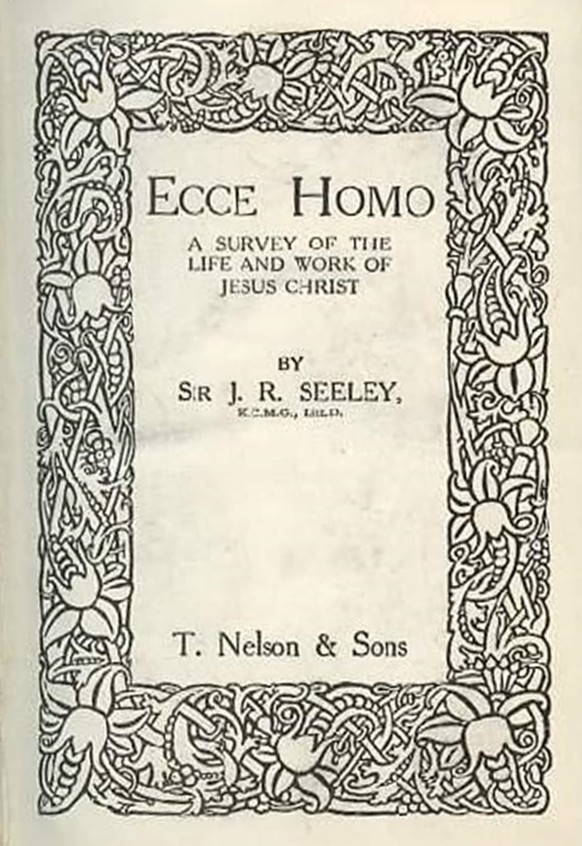 It was while he was a student at Yale that R.A. Torrey (1856-1928) became a Christian. He describes it as a time when he was “leading a very reckless life” which involved, among other things, drinking heavily as a seventeen-year-old college kid. By his own testimony, he was driven to the brink of suicide, and even made one impulsive attempt at it. His conversion story is a mess. He was confused and had the cart before the horse in several ways. Torrey apparently decided he had to be a preacher before he decided he needed to be a Christian. In his own words, he “did not know what it meant to accept Christ.”

Over the course of the next couple of years, things sorted themselves out as Torrey pondered and did some reading. But the reading he did during this crucial transition is interesting. In his autobiographical notes (archived at Moody and printed as an appendix in How God Used R.A. Torrey), he lists three books that made a deep impression on him and finally led him to make a public profession of faith in Christ. The first two are J.G. Holland’s Bay Path and Nathaniel Hawthorne’s The Scarlet Letter. Taken together, these strike me as books so New Englandy that nothing could be more New Englandy. I confess I don’t quite understand what they meant to him at that time in that place (New Haven near the end of the 19th century) with tremendous spiritual pressure bearing down on him. But the third book is yet more odd: J. R. Seeley’s Ecce Homo.

Ecce Homo: A Survey of the Life and Work of Jesus Christ was published anonymously in 1865. Later it became known that the author was J.A. Seeley, who went on to have a prestigious career as professor of history at the University of Cambridge. The book caused quite a stir (see Daniel Pals, “The Reception of “Ecce Homo,” Historical Magazine of the Protestant Episcopal Church 46:1 (March 1977, 63-84), being both widely praised and widely condemned. The reason it evoked such different responses is because it is a pervasively vague book. In it, Seeley commends the world-changing power of Jesus Christ’s ideas and social program. He draws from the gospels in a loosely historical-critical way, constantly indicating that he’s not appealing to them as reliable and exact documents, but gladly accepting that they give us some kind of insight into what Jesus was up to. Critics to Seeley’s left objected that the gospels only tell us what his disciples thought; critics to his right objected that the gospels are divinely inspired and inerrant records of exactly what Jesus said and did. But the reading public at large found Ecce Homo‘s middle position very stimulating, and the book not only sold briskly but was the topic of conversation among the upper and middle classes.

Let me point out three criticisms of Ecce Homo from a conservative perspective. First, its doctrine of Scripture is very low, and the lack of any idea of inspiration shows up over and over. Second, the book is not only doctrinally imprecise, but argues at length for the virtues of doctrinal looseness and latitudinarianism. Seeley thinks that we should allow each other exactly as much slack for theological lapses as we allow each other for lapses in practice: nobody’s perfect in conduct, so why should we expect perfection in creed? Third, the energy of the book all tends toward social reform, to such an extent that the Holy Spirit only shows up under strange titles like “Enthusiasm of Humanity.” The trading of supernatural for natural ends is one of Seeley’s favorite topics:

From another point of view, of course, these features of Ecce Homo could be viewed as merits. Plenty of people then as now think the world would be a vastly better place if our cultural leaders were moved by the merely human witness of the Bible to be undogmatic in their theology but energized for sacrificial labor in the improvement of society.

The point I want to make is that R.A. Torrey is not one of those people. What I mean is, the R.A. Torrey who circumnavigated the globe in 1904 preaching revival, who edited The Fundamentals, and who preached extremely doctrinal sermons at the Church of the Open Door from 1912 to 1924 would not approve of Ecce Homo lax theology. It is exactly the kind of book the mature Torrey would have hated. If that book were published in 1915 and handed to R.A. Torrey, he would instantly recognize it as an unreliable book. He would sniff out its “fatherhood-of-God-brotherhood-of-man” FOGBOM liberalism from across the room, and warn people away from it.

But the book didn’t come out in 1915; it came out in 1865, and Torrey read it as a confused eighteen year old man at Yale College, somewhere between attempted suicide and enrolling in seminary. Torrey refers to Ecce Homo several times in later life, with a strange combination of gratitude for what it did to him, and clarity about what’s really in the book. In his autobiographical notes, he says

Ecce Homo especially made it clear to me (though it is not by any means an orthodox book) that I ought to come out and make a public confession of Christ. As I had been known in college as anything but a Christian, I felt that I ought to make my public confession of Christ then and there, and so did in the college chapel and united with the college church.

It’s easy enough to observe that Torrey changed, moving from the left to the right on a number of doctrinal issues, and in his sense of how clearly the basic supernaturalism of Christian life had to be recognized. It’s also true that the American theological landscape shifted considerably in the decades we’re talking about: the controversy over R.J. Campbell’s “New Theology” around 1907 shook things up, and the fundamentalist-modernist conflict was rattling most of the established denominations even before the 1920s. It’s also true that Seeley went on to a distinguished intellectual career that did not include any clarification of his book’s vagueness, so in retrospect readers could look back at Ecce Homo as an isolated performance rather than an early work that was given more substance by subsequent statements.

But none of that quite explains away the fascinating phenomenon of R.A. Torrey, fundamentalist patriarch, having been transformed by the message of a vague, liberal book.

There must be all sorts of similar testimonies, and they would probably all be instructive. It would be fun to gather Christians of a conservative temperament and confessional clarity, and ask them, “What’s the worst book that ever had a positive influence on your spiritual development?” And no cheating: the book can’t serve as a cautionary tale or a wake-up call. The result would be a set of books that the speakers couldn’t recommend in good conscience, but had to admit ministered spiritual life and health to them at a particular time and place. Even R.A. Torrey knew that there are some books you can’t recommend or endorse, but that you have to testify to.