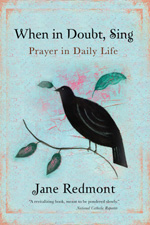 When I was in graduate school, one of the most important groups I was involved with was a small group of doctoral students who were in the same phase of the program. We studied together, arranged special tutoring sessions on hard topics, and shared the burdens of life as PhD-wannabes. We were a pretty diverse group, but we had enough in common that we were able to help each other along.

One member of that group, Jane Redmont, managed to publish a book on prayer right in the midst of the academic fuss. That book, When in Doubt, Sing, was published by HarperCollins in 1999 and was well received by critics (“revitalizing,” “wide-ranging and substantive,” “open-minded, generous-hearted”).

But it was a big $25 hardcover in 1999, and never came out in paperback. Partly for that reason, When in Doubt never quite found the audience it deserved. Now, however, it has been re-issued with a new cover and an updated preface by Sorin Books.

When in Doubt, Sing is a great general introduction to the topic its sub-title announces, “prayer in daily life.” Jane Redmont is a journalist who went on for a doctorate, and she brings the strengths of both those backgrounds to this book. The book is well organized to explore all the major topics of the life of prayer, and enriched with numerous interviews that Jane conducted with a range of believers. Jane manages the perfect balance between being the professor in charge of setting up the most important topics for her readers to consider in a logical order, and being the reporter who is just fascinated by the actual lives of people involved in those things.

As a result, the reader gets to hear a lot of different voices in this one book. The interviews, case studies, and reportage make this biggish book (448 pages) a breezy read. Think of it as a printed episode of This American Life on the topic of prayer, in which you meet all sorts of people who tell you about their prayer lives.

One of those interview subjects, by the way, is me. Jane interviewed me on the subjects of icons (since I’m a Protestant), praise (since I grew up Pentecostal), and memorization (since I’m a Bibley evangelical).

The book is also a whirlwind tour of all sorts of things that aren’t included in every book on prayer: lamentation, physical posture, imagery, the Psalms, healing, music, yoga, you name it. Jane was Roman Catholic when she wrote the book and is Anglican now, but her ecumenical and interreligious interests are evident in the topics she chooses and the way she handles them. She describes herself as “a theologian with strong ecumenical and feminist interests and commitments” who works “as a professor of religious studies and women’s studies (and periodically, environmental studies) at Guilford College in Greensboro, North Carolina.” As contemplative prayer morphs into centering prayer morphs into Zen practice, Jane tours around the world (mostly the east and west coasts of the U.S., but with many other locations) interviewing the people who do these things in their prayer lives.

Every chapter ends with a generous selection of prayers from various traditions. These selections are one place where Jane puts on her scholar’s hat, because she must have a great command of an extensive library of printed prayers from all over the world. She picks them to complement the chapter they are in, and also with an eye to diversity. The Psalms figure prominently.

When in Doubt, Sing, it should be obvious to the reader, is not written for conservative evangelicals. In a chapter on inclusive language, one woman reports that her prayer life is “a journey of renaming the Divine; beyond any name.” She prays “in communion with Father, Mother, Mother-Father-God, Spirit, Christ, Universe, Master of the Universe, Loving Essence, Holy One, Dear Heart, OM…” and so on. If you are easily outraged by liberal church life, there will probably be something to make you shout “what the heck?” every 19.5 pages or so. But while When in Doubt, Sing wasn’t designed for evangelicals to hear, it’s a fine book for us to overhear.

I can’t think of a better way to listen in –politely– to how everybody else is praying.

(thanks to Ave Maria / Sorin Books for the review copy)