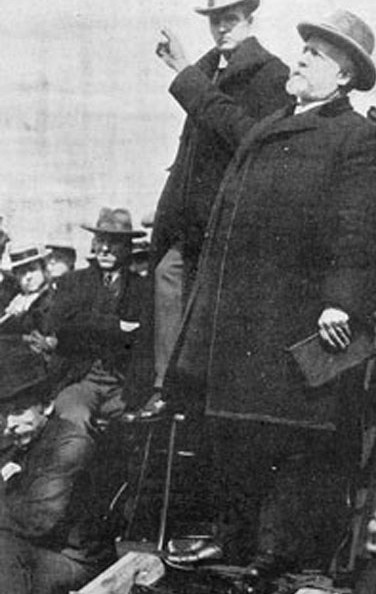 For the last six years, students from the Torrey Honors Institute at Biola have taken a summer trip to Cambridge, England. The trip is a three-week academic course in the humanities that specializes in reading local authors and making the most of being in the rich cultural site that is Cambridge. “Great Books in a Great Place” is our official motto for the class (easily edging out “Where Torrey Tutors Meet Tory Tudors”).

Torrey Honors is a little less than 20 years old, and Biola University is about 107, which is pretty old by southern California standards but young compared to, say, India. So we do appreciate the chance to catch a little vibe of venerability from hanging out around Cambridge University, which reaches back into history a century or seven further than we do.

But July 2010 was not the first time Torrey visited Cambridge. Torrey was already there in 1911.

Our namesake, that is: Reuben Archer Torrey (1856-1928), who preached an important revival there. “Revival” is probably the correct American term; the English would call it a “mission.”

R. A. Torrey preached all over the world (“Evangelist to Four Continents,” says the big bronze plaque in our hallway), beginning with the great tour of 1903-5. In terms of places visited and people reached, Torrey’s revivals were as big as those of his predecessor Dwight Moody (who had also preached at Cambridge back in 1882). In the UK, Torrey and his song-leader Charles Alexander had been very influential in North London and in Liverpool in 1904-5. But he skipped Cambridge in those early years.

Torrey finally did come to Cambridge in  November 1911 by special invitation of the Cambridge Inter-Collegiate Christian Union. The CICCU prepared diligently for nine months, especially devoting themselves to prayer that the mission would be effective. In the CICCU history From Cambridge to the World: 125 Years of Student Witness, Oliver Barclay and Robert Horn tell the story this way:

The decision to bring Torrey aroused immediate antagonism in Cambridge. He was both an ‘American revivalist’ and also a scholarly and informed opponent of higher criticism. He had studied in Germany and his earlier sympathy with liberal theology had turned to determined opposition.

But the CICCU asked him because he was an evangelist. There was virtually no senior support. The CICCU even had difficulty in obtaining a meeting place owing, it was believed, to senior opposition.

There was a rumoured plot to kidnap Torrey on arrival. He arrived early for preparatory meetings and urged the members to do their work in dependence on God, on prayer, on the Word of God and the Holy Spirit, and by personal work.’

Torrey preached with logic, earnestness and spiritual power. The addresses were simple and searching. At the end of the first week many had professed conversion and stood to signify it. Torrey stayed on another week to instruct them and to give two further evangelistic addresses. A hundred Scofield Reference Bibles were given to men who had professed conversion and Torrey’s emphasis on ‘the Morning Watch’ led, he believed, to 200 men committing themselves to spending an hour each morning in prayer and Bible study.

Another source gives a bit more detail on the opposition and the kidnapping plot (which may of course have been just loose undergrad talk):

Many senior men took it as a kind of affront that an American “revivalist” should seek to convert the University. The promoters of the mission had difficulty in finding a hall. Some undergraduates formed the notion of kidnapping the missioner on his arrival at the station, taking him to Royston, and confining him in a hotel there till the time fixed for the mission was over. But in the end Torrey returned to America pleased with the results of his visit to Cambridge. “The Spirit of God was mightily present,” commented C. T. Studd, who had worked as an assistant missioner.

While it was controversial even among Christian groups, the Torrey Mission apparently brought new energy and motivation to Christians connected with CICCU, and there were many conversions and awakenings. As is always the case with evangelistic and revival work of this sort, only God knows the reality of its results. Barclay and Horn mention that when World War I came, “the young men poured into the army and the appalling casualty lists inscribed on college war memorials contain many names of Torrey Mission converts.”

There’s an interesting history to be written of American revivalists who held successful preaching events in the UK. Probably the best way to write it would be to study the major London crusades: Dwight Moody in 1874, R.A. Torrey in 1905, and Billy Graham in 1954. The odd ways that British and American evangelicalism align and diverge are probably in evidence in the reactions to these three very different evangelists. But the 1911 Torrey Cambridge Mission occupies a unique position, with more marks of class conflict and awareness of social position. An American revivalist in London or Liverpool is one thing; but in Cambridge itself?  Scandalous!

Torrey had a few things going in his favor. His self-presentation was always respectful and respectable: His speech was crisp, he appealed to the mind more than to the emotions, and he often scattered a few literary or cultural references into his sermons. (Read his best sermons in the new Moody Press book How God Used R.A. Torrey). As a Yale-educated man, he had some credibility in academic culture. Since he had studied in German universities, he seemed to be speaking from first-hand acquaintance when he criticized modernist theology, and could not easily be dismissed as a mere know-nothing. Perhaps these qualifications were enough to take the edge off of what was ultimately still unacceptable: an American preacher coming to Cambridge as if to teach the university something it needed to learn.

(Dedicated to the 21st century Torrey Cambridge Mission Teams who have done evangelism with international students these past few summers, and especially to the 2015 team who starts today.)