“The Reformation isn’t over,” Leithart began. “But Protestantism is, or should be.”

Fred Sanders quickly countered that rumors of Protestantism’s demise had been greatly exaggerated by Leithart.

Leithart responded with a “yes, but…“

And someone got the bright idea to open up the conversation. 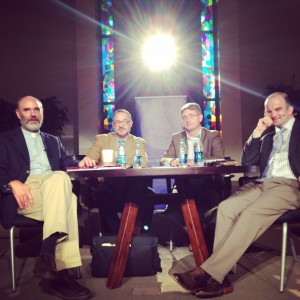 Last night, Biola University hosted a conversation on “The Future of Protestantism.” (Watch it here.) A smashing success, the event was sponsored by the Davenant Trust, First Things, and the Torrey Honors Institute. Moderated by the Davenant Trust’s Peter Escalante, the conversation included Leithart, Sanders, and Westminster Theological Seminary’s Carl Trueman. If Leithart embodied what he calls the “Reformational Catholic” and Sanders represented the great movement of loosely affiliated evangelicals, Trueman spoke on behalf of the creedal and confessional conservatives of Protestantism.

The nearly two-hour conversation began with brief statements, not quite salvos, from each of the three discussants. Leithart offered a figural reading of Scripture and suggested that God is doing a new thing, making one new man out of two–as he did in restoring the unity of Judah and Israel. We are one church by virtue of our union with Christ by the Spirit, and so we should embrace the gifts of our, say, Roman Catholic brothers and sisters and see ourselves tied to them. One implication is that “their errors are ours.”

Sanders sought to commend evangelical churches as bearers of the Reformation. They provide institutional witness to and support of the clarity of the gospel as rediscovered in the Reformation. If they are at times too theology-lite, this can be remedied by a steady diet of the Christian tradition. Let’s read old books–that should do it. And these books belong to evangelicals, by virtue of their union with Christ. “The Trinity is our anchor,” Sanders reminded us, “and it can certainly be our church renewal program.” This reminded me of Billy Abraham’s criticism of various twentieth-century renewal programs. Abraham argues that renewal is a produce of the Holy Spirit and a function of the church’s return to its canonical heritage in all its richness, rather than a deliverance following on solutions to seemingly intractable epistemological problems.

Trueman confessed skepticism about Evangelicalism. He finds it a nebulously defined movement prone to in-fighting and thus ill-equipped to cope in the new world American Christians are facing. But this needn’t be so. “Evangelicalism in its classical form–whether Reformed, Lutheran, or Arminian–has the resources to meet [Leithart’s] critiques.” If anything, Trueman worried that Leithart’s Reformational Catholic proposals might muddy the soteriological waters and relativize the great solas of the Reformation. Where Leithart appealed to the church universal, Trueman spoke up for the church local. He wants to be able to offer the assurance of faith in a God who loves sinners and justifies by grace alone through faith alone, and the church of Luther and Calvin enable him to offer that hope with clarity and conviction to the sick and dying. 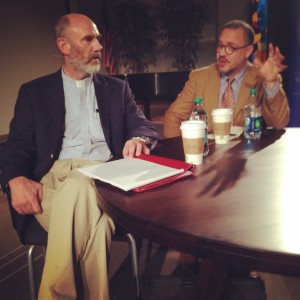 Peter Escalante mentioned to me later in the evening that this really ended up being more a conversation about what Protestantism is than whither it is going. In his attempt at a little “Wednesday Morning Quarterbacking,” Leithart wondered whether a certain amount of equivocation on the very term “Protestant” hadn’t congested the conversation as a whole. Leithart’s chief concern is the sociology of American Protestantism, its tribalism, whereas Sanders and Trueman focused their attentions on the doctrinal deliverances of Protestantism. Still, the questions of what and whither belong together, and also with the question of whence. Leithart seems to want to say that the current what of Protestantism is an unnecessary devolution of its whence, such that its whither would best be served by re-thinking things from the ground up. Sanders thinks it best to recall evangelical Protestants to their whence, to receive the riches of the great tradition that belongs to them. Trueman contends for the strict identity of whence and what.

A consensus began to emerge as the three men scanned the horizon and wondered if Protestants won’t find themselves to be accidental ecumenists despite themselves, as traditional Christian convictions come under scrutiny and American Christians, whether Roman Catholic, Orthodox, or Protestant, receive pariah status for continuing to believe what Christians have long believed. Co-belligerency may be the way to friendship and the kind of mutual give-and-take for which Leithart longs.