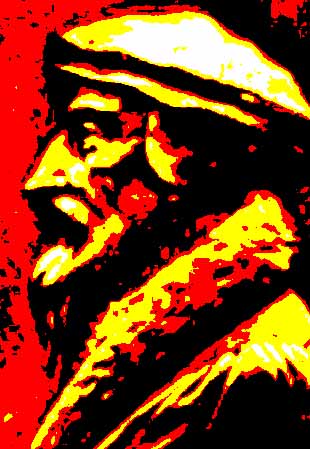 Elements of General History, 1801: Praises Calvin’s rationality but condemns his “intolerance and… spirit of persectuion.” The Reformation is great, but we must distinguish between that event and the actual Reformers, who were not so good.

The Beginnings of New England: or the Puritan Theocracy in its Relation to Civil Liberty, 1889: Calvin was “the constitutional lawyer of the Reformation, with vision as clear, with head as cool, with soul as dry, as any old solicitor in ru sty black that ever dwelt in chambers in Lincoln’s Inn. His sternness was that of the judge who dooms a criminal to the gallows.” What do we find in Calvin? Much of what we find is loathesome “as sheer diabolism.”

American textbooks were trying to tell the story of America as the land of the free. One of the convenient heroes of that story was Martin Luther: his story could be boiled down, in textbooks, to the triumph of personal religious freedom against repressive authority. While that doesn’t exactly capture the spirit of Luther, it does put him in the position to be a good American. In one of the textbooks, the defining moment of the Reformation is not Luther’s posting of the 95 theses (an invitation to theological argument), but his actof burning Pope Leo’s bull Exsurge Domine. Pressed into the secularized, Americanized outlook, Luther’s fight was for freedom of opinion, and the Reformation was “the great endeavour to emancipate human reason, the insurrection of the mind against the absolute power of the spiritual order.” Luther, with a little re-scripting and a lot of squinting, could be cast in the role of champion of the American cause (the casting of the Pope as the opressor was obvious to the uniformly anti-Catholic authors of these textbooks).