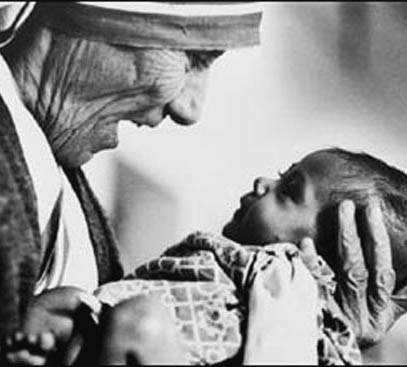 Next month, a book of Mother Teresaâ€™s personal letters will be released. Almost nobodyâ€™s read it, but everybodyâ€™s talking about it anyway, especially the fact that Mother Teresa (1910-1997) was long racked with doubt and a sense that God had withdrawn from her life. According to a surprisingly good article in Time, the book apparently provides extensive documentation of this long period of desolation, though the fact of it has been public knowledge since 2003 (see the report here and the best commentary here).

â€œNow,â€ a lot of people seem to think, â€œis a great chance to argue that she was sad and empty because she didnâ€™t share my opinions!â€ As usual, the protest atheists come off looking the most opportunistic. Chronic doubt and depression are terrible things, yet itâ€™s not hard to see how God will cause these revelations about Mother Teresa to work together for a good result. The report of doubt and darkness will draw more attention to her work and her words â€“this is likely to be as close to a scandal as we get from her life. And when you pay attention to what Mother Teresa did and said over the years, you end up hearing a lot about Jesus (to the chagrin of Christopher Hitchens). Remember back when C. S. Lewis became interesting to more people because Shadowlands made it seem like maybe he stopped believing in God after the death of his wife? The more you read Lewis, the more you end up hearing Christian claims –even if it’s the whiff of scandal that draws you at first. The same may happen with Mother Teresa, whose story is back on the front page for a while.

Now is not a great chance to argue that Mother Teresa was sad and empty because of the ways her beliefs deviated from yours. Here are ten possible reasons for her sadness. They are Maybes.

1. Maybe itâ€™s depressing to be immersed in the lives of the poor of Calcutta, every day for your whole life. Think about the last thing you saw that â€œruined your day.â€ Then think Calcutta.

3. Maybe her sense of Godâ€™s nearness was so intense for a brief time in the 1940s that everything after that seemed, by comparison, empty. The key is, â€œby comparison.â€

4. Maybe she inherited from her religious culture an unrealistic set of expectations about the level of spiritual intimacy to expect in her emotional life. Whether it is the expectation of â€œbeing visited by extraordinary consoling gracesâ€ in a Catholic context or â€œhe walks with me and he talks with meâ€ in an evangelical context, the gap between the rhetoric and the daily reality can be a steep drop.

5. Maybe her special gift was more about outward activity than inward contemplation, and whenever somebody asked her to write down her big sins, she came up with besetting doubt. So her life is 95% obedient service, and 5% darkness and doubt. (A corollary of this one is, Maybe she wasnâ€™t perfect)

6. Maybe the twenty-one thousandth time you wake up thinking, â€œHey, Iâ€™m pretty cool, I bet Jesus is really pleased with me,â€ –only to catch yourself at that nonsense — you get a little depressed that this sinful self-congratulation thing isnâ€™t going anywhere anytime soon.

7. Maybe she developed, over the years of prayer, Bible study, church attendance, and service, an appropriately elevated sense of how high and exalted God is compared to any human achievement or conduct. It could be that the people who throw themselves into obedience the most whole-heartedly are the ones who are most able to see how exalted God is, and how petty, partial, and weak our best response is.

9. Maybe prayer is talking to a God who is invisible and silent, and everything in our nature cries out that visible and speaking would be more gratifying.

10. Maybe all creation groans for the revelation of the glorious freedom of the children of God, and those who have the Holy Spirit groan in greatest solidarity with the rest of creation.