A quick doodle that I made during class to chart who’s talking, and to whom, in Psalm 52: “Why do you boast of evil, O mighty man?” 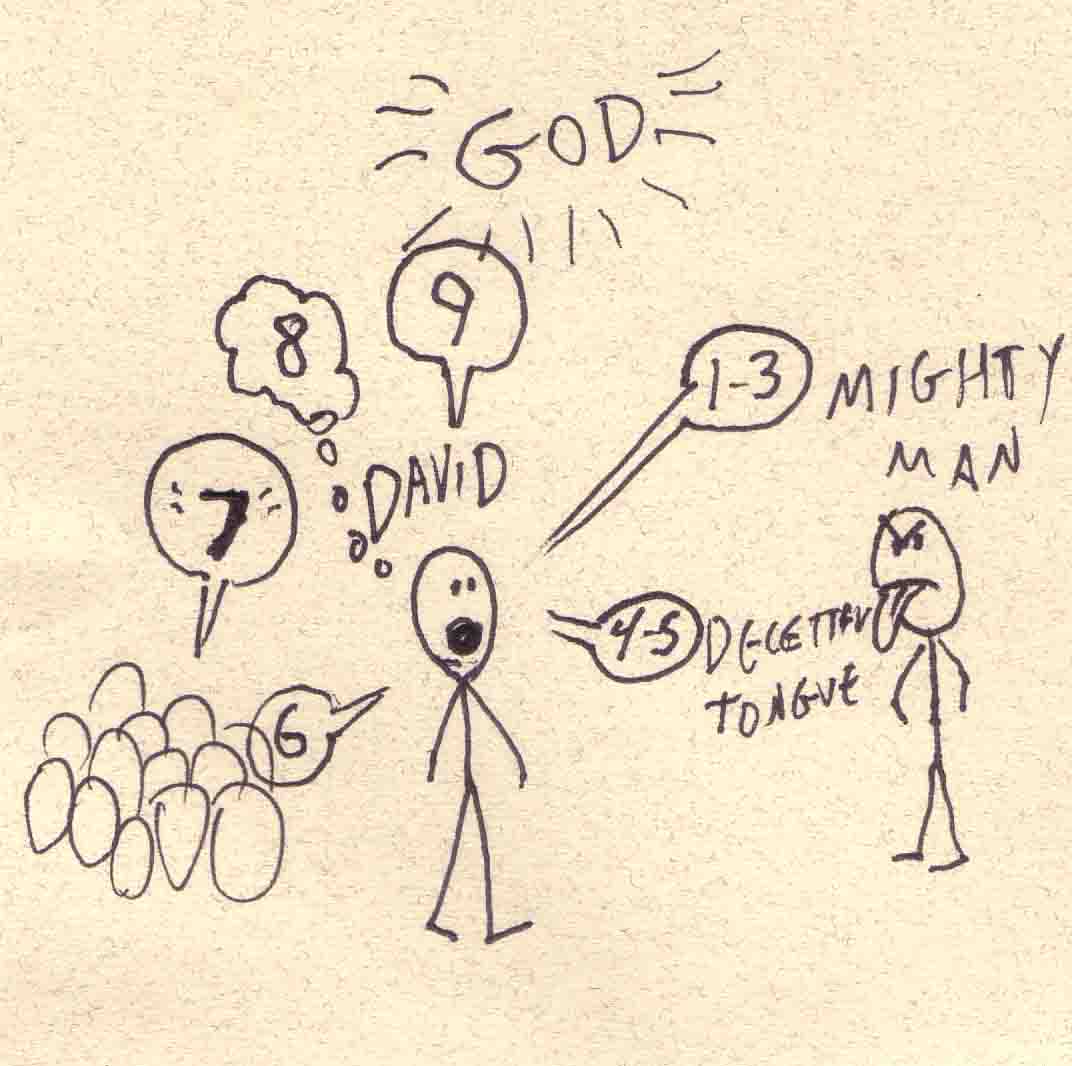 The diagram could be cleaned up, of course, and could be improved by arranging the word balloons so that the eye naturally picks up verse 1 at the top center and then swings around clockwise to end with the address to God (“I will thank you forever… I will wait for your name”).

Another possibility would be to expand the diagram by including the full text of the Psalm in the actual word balloons. Then the eye would sweep around the clock from 1 back to 12, addressing the different audiences and reading the Psalm as it goes. On the other hand, that would make it less like a diagram and more like a text. The fewer words the better. The label “deceitful tongue” should probably be deleted for the sake of elegance. You can see the tongue; why label it?

The goal of a diagram like this is to make visible some of the Psalm’s dynamics, imprinting them on the understanding and the memory. You are unlikely to forget Psalm 52’s reference to the deceitful tongue after seeing this little doodle, for example. And once you’re keyed in on that, you should notice on your own how much the Psalm focuses on verbal sin. In fact, if you read the Psalm closely against the story of Doeg the Edomite mentioned in the superscription, you’ll see that there are a lot of things happening in that story, and that this Psalm (somewhat unpredictably) picks out the deceitful tongue as the main event.

A good diagram-maker doesn’t have to understand everything happening in a passage in order to produce a fruitful diagram. Since a diagram is a kind of commentary that tracks very close to the dynamics of the text itself, it can capture and record more than the diagrammer knows. All things considered, it’s better if the diagrammer is working with real insight rather than without it, of course.

The crucial skill for the diagram-maker is making judgments about what to include and what to omit. This diagram fails to make a place for the recurring statement of trust in the steadfast love of God (vv. 1 & 8). I’m not sure how to fit that in economically. The diagram also fails to record the contrast between those who trust in the steadfast love of God and those who trust in themselves (v. 7): Psalm 52 is as much a contrast between these two types as Psalm 1 is, and the contrast is arguably the big idea of the whole Psalm. That contrast could be registered in this diagram by simply rendering the two figures better, perhaps leaning toward or away from each other so the viewer’s eye picked up their counterpoise.

What the diagrammer should generally avoid is over-interpretation, which would encode a particular, debatable interpretation into the diagram itself. For example, it’s probable that the Mighty Man of v. 1 is to be identified as Doeg the Edomite from the superscription. But since the Psalm doesn’t connect the two quite so directly, the diagram is likely to be more powerful and productive if it leaves that connection implicit rather than making it more explicit than the text does. I did label the speaker as David; that is an interpretive decision too. But I made the judgement call that the superscription speaks for the canon, which directs us in many profound ways to think of the speaker of the Psalms as David unless we are given reason to think otherwise.

A good diagram should also evoke curiosity about the text itself, drawing you to read the Psalm instead of staring at the diagram. So if this is a good diagram and it worked for you, here’s your link to Psalm 52.