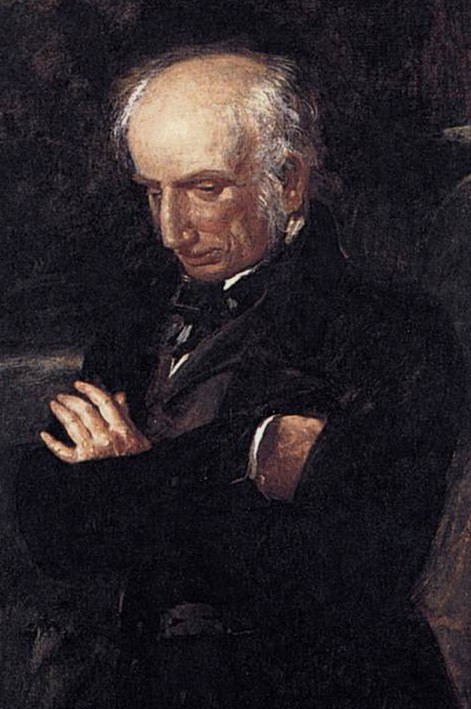 William Wordsworth perfected a certain type of nature poetry, a particularly spiritual sort of nature lyric. He celebrated the movements of the infinite Spirit making itself known to humanity through the forms of nature as contemplated by poet-prophets who were the universe’s appointed spokesmen. Nature herself elected certain sensitive souls, forming them throughout early life to be receptive to her revelations in later life.  As he recounts in The Prelude, Nature populated his young imagination with the forms of giant cliffs and dark forebodings, of dancing daffodils and of entire hillsides humming as aeolian harps, so that in his poetic maturity he could be shown greater revelations: the vision atop Mount Snowdon, “the perfect image of a mighty Mind… that is exalted by an underpresence.” Nature was trying to tell him something, and his job as a poet was to relay that message to us.

In the 1920s, Aldous Huxley wrote a short essay attempting to deflate Wordsworth’s poetry by identifying it as not universal, but narrowly local:

In the neighborhood of latitude fifty north, and for the last hundred years or thereabouts, it has been an axiom that Nature is divine and morally uplifting. For good Wordsworthians — and most serious-minded people are now Wordsworthians, either by direct inspiration or at second hand — a walk in the country is the equivalent of going to church, a tour through Westmorland is as good as a pilgrimage to Jerusalem. To commune with the fields and waters, the woodlands and the hills, is to commune, according to our modern and northern ideas, with the visible manifestations of the “Wisdom and Spirit of the Universe.”

Wordsworth, says Huxley, misunderstood himself. He was not telling us what universal nature says about itself; he was telling us what the Lake District says. At best he was speaking for a territorial spirit, a particularly nice one; but certainly not for universal spirit. Not God but a British sprite or nymph.

In Huxley’s view, if you hand the microphone to nature at another latitude, you’d hear a different testimony:

The Wordsworthian who exports this pantheistic worship of Nature to the tropics is liable to have his religious convictions somewhat rudely disturbed. Nature, under a vertical sun, and nourished by the equatorial rains, is not at all like that chaste, mild deity who presides over the Gemüthlichkeit, the prettiness, the cozy sublimities of the Lake District.

For Wordsworth, Nature had her terrors, but in global context the terrors of the English countryside are merely cute. “The worst that Wordsworth’s goddess ever did to him was to make him hear ‘Low breathings’ … and ‘sounds Of undistinguishable motion.'” And scary as that might be to a kid in the country, the mature Wordsworth still “seems to have imagined that this was the worst Nature could do.”

But “a few weeks in Malaya or Borneo would have undeceived him,” says Huxley.

The sparse inhabitants of the equatorial forest are all believers in devils. When one has visited, in even the most superficial manner, the places where they live, it is difficult not to share their faith. The jungle is marvelous, fantastic, beautiful; but it is also terrifying, it is also profoundly sinister. There is something in … the character of great forests … which is foreign, appalling, fundamentally and utterly inimical to intruding man. The life of those vast masses of swarming vegetation is alien to the human spirit and hostile to it.

Huxley’s essay is stimulating to read, and even though it soon becomes evident that his arch dismissiveness is part of a strategy to to conceal the fact that he is out of his depth in criticizing Wordsworth, he does score some points. For one thing, Huxley is able to critique the Lake Poet from a New World perspective:

It is a pity that he never traveled beyond the boundaries of Europe. A voyage through the tropics would have cured him of his too easy and comfortable pantheism. A few months in the jungle would have convinced him that the diversity and utter strangeness of Nature are at least as real and significant as its intellectually discovered unity. Nor would he have felt so certain, in the damp and stifling darkness, among the leeches and the malevolently tangled rattans, of the divinely anglican character of that fundamental unity.

There are many things happening in Wordsworth’s poetry, but one of them, as Huxley rightly notes,  is a kind of natural theology. He believes nature is showing him something about what is beyond nature, and on that basis he makes certain statements about God –though it took Wordsworth decades to learn distinctions between the mandatory pantheistic mood of his poetic idiom and the trinitarian commitments that worked as a corrrective against it.

In light of Huxley’s “you’ve never even seen a rainforest” criticism, I have two questions about Wordsworth’s natural theology. The first is regional, the second is doctrinal.

The regional question is this: If we grant that Wordsworth is (receptively) sensitive to and (productively) articulate about his natural environment, then it may well be that the poet is prophet of the spirit of nature. But perhaps he is only prophet of the spirit of nature as it is available in one region. If all this is true (a chain of ifs, admittedly), then perhaps other poets in other regions can also speak the truth of their microclimates and localities. Instead of just saying “I’ve seen the tropics, and the people there believe in devils,” Huxley could seek out nature poetry from tropical regions, and see if in fact they are constructing a rougher, less humane natural theology.

As part of an ongoing project of understanding California theologically (see the website and the recent book), I am especially interested in what has been said by nature poets of the American west. If we have had our California Wordsworth yet, it would probably be Robinson Jeffers, whose rock-and-hawk, surf-and-sky Inhumanism claimed to give voice to the opinion of the California coastline. Indeed, the natural theology of Jeffers was (as perhaps Huxley would have predicted) considerably darker than anything Wordsworth ever dreamed of. Wordsworth was haunted by cliff forms that chased him; Jeffers imagines mountains splitting humans open to see what’s inside these noisy mites. If Wordsworth in the tropics would produce a natural theology of devils, our Wordsworth of the west coast produced a natural theology whose gods are at best indifferent to human destiny and at worst are in a hurry to shrug off the parasitic vermin that is man.

The doctrinal question that occurs to me is this: Wordsworth operates poetically at enough of a distance from orthodox Christianity that while he speaks of Nature making things known about supernature, he never speaks of “general revelation” or of God revealing himself through nature. Everything depends on ambiguity on this point; the Platonizing, pantheistic mist is essential to Wordsworth’s achievement as an oracle. But what if we can turn to Wordsworth as a spokesman, not for what God says about himself but for what nature says about God? What if we can hear in a nature poet –chastened, relativized by localism, and filtered for the way his or her own personality necessarily colors the poetry– not the voice of God but the voice of non-human creation, saying something about God? If nature makes messages known through poets, those messages are not binding, canonical, or authoritative. But they do come from an older source with privileged access to things humans can’t know without help.