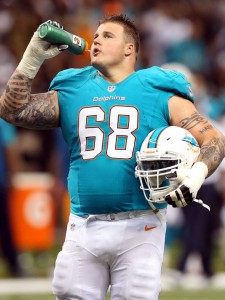 Richie Incognito’s alleged harassment of his Miami Dolphins’ teammate Jonathan Martin has been in the news a great deal these last couple weeks, and it is a complex story. I assume that there will be a good deal more of “he said he said,” and that we may never get to the bottom of what happened.

But the conflict revealed the dirty underbelly of a locker room culture that is one more reminder that destructive behavior can flourish anywhere, even on the professional football teams with their carefully crafted images that millions of fans live vicariously through on a weekly basis.

When Jonathan Martin left his job as a Miami Dolphin lineman on October 30 because he was being harassed,  many league veterans instinctively questioned Martin’s toughness rather than challenging Incognito.  Dolphin’s offensive tackle Tyson Clabo said that Martin “Needs to stand up and be a man.” He was echoed by Antrol Rolle, who said about Martin, “You’re a grown-a** man. You need to stand up for yourself.” Even after news broke that Incognito had left racist voicemails and threatened to assault Martin’s sister, Hall of Famer Mike Ditka said on ESPN’s pre-game show, “If I was the coach, I’ll not have either Incognito, the bully, or the baby, Martin on my team.”

In such a locker-room culture, manhood apparently means responding to any harassment or threat with physical violence. Which is what the Dolphins’ general manager Jeff Ireland suggested to Martin’s agent after the agent complained about Martin’s treatment by his fellow teammates.

I mean, that’s a great idea, right?  I have always found punching people and questioning their manliness clears away conflict and moves things forward. That’s exactly how civilized societies deal with struggles, right?

The mark of a civilized man is having the capacity to resist using force, not the brutality to deploy it at a first provocation.  Such civilized men understand that their manhood is not tied to their willingness to assault someone when they have been slighted or belittled. I say score one for Jonathan Martin for having the courage to walk away.

What I find most telling is that Jonathan Martin’s speaking out about the climate in the Dolphins’ locker room seems to be the worst of his offenses. Look at what Lawrence Taylor said this about the situation:

I don’t know if Martin tried to deal with these issue in-house, but that he broke the code of silence has caused his peers to ostracize him.  This is the real problem: cultures that deal in humiliation, intimidation, and shame need to operate in the shadows. This type of profanity-laced racist behavior is antithetical to human flourishing to real manhood. But it draws its power from staying in the darkness, and now that it has been brought into the light we can see how repulsive it truly is.

It is shocking how football players have tried to justify the behavior that goes on in the locker room. They say we can’t understand unless we’ve been there, that their culture is different. But their inability to properly assess what has gone on and to see the need for sweeping change is itself self-condemnation.

Professional football has a crisis of character, and we haven’t even mentioned steroids or other areas of violence and moral turpitude.  A man’s goodness goes well beyond his ability to play the game well, and if bad character is given sanctuary it will rot the institution from the inside out.