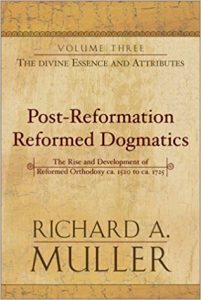 Does God have emotions? Anybody who reads the Bible certainly finds God declaring himself to be full of love, full of anger, and many other things besides. So the answer seems obvious: Emotional God.

But as soon as you say it, it sounds odd and you catch yourself thinking it can’t be quite that simple. God very concretely declares himself as loving or angry in Scripture, in response to particular situations. But then comes the step of abstraction: it’s our own generalizing intellect that opens up a conceptual box to load those statements into. We should choose carefully. I learned some time ago that there are good reasons not to label that box “emotions.” To do so is to “skate blithely on the thin ice of conceptual ambiguity.”¹

One of the reasons the word “emotions” isn’t right is that it’s a pretty nebulous word even on the human side. If we’re going to reason analogically at all, we will reason from the known to the unknown. And the word “emotion” covers too wide and varied a field. We might say it’s just a word, not yet a term, unless we do some serious theorizing about emotion.

Another reason is given away by its etymology, which suggests that something is being moved, being shoved out of place by an external force. It’s a lovely word-picture for what emotions do to us, and it also shows why it’s a ridiculous word-picture to apply to God.

The word emotion, though it comes to us from Latin (but also partly from old French, according to the OED), is not a properly ancient word. It bubbled up around 400 years ago and doesn’t quite sync with any of the Latin or Greek terms we wish it would. So if you want to get any help from the church’s elders –I mean elder than 400 years ago or so– you have to track the concept itself using other words.

As Richard Muller reports, the post-Reformation Reformed theologians (late 16h and 17th centuries) approached the subject using two different term: affections and passions. They flat-out denied that God had passions, a word which strongly suggests “vehement commotions.” But they were able to talk very sagaciously about God’s affections.

God knows things because of himself or in his essence –not because of or by means of the things. Since a passion has its foundation or origin ad extra and its terminus ad intra, it cannot be predicated of God and, in fact, fails to correspond in its dynamic with the way that God knows. An affection… by way of contrast, has its foundation or source ad intra and terminates ad extra, corresponding with the manner of the divine knowing.

Muller then uses an etymological illustration:

This understanding of affections corresponds, moreover, with the etymology of the terms: an af- or ad-fectio from adficio, to exert an influence on something –in other words, an influence directed toward, not a result from, something; whereas passio, from patior, is a suffering or enduring of something –it can refer to an occurrence or a phenomenon and even to a disease.

The etymologies, I think, are very helpful guides to interpretation, or at least good memory aids. Of course the point is not just to police our language, but to use the words to help grasp the underlying reality. The etymological observation is a good reminder that nothing outside of God shoves him around (e-motions), nor does he passively undergo or suffer things (passions). But he does exert an influence (affection), and his heart is in it.

So the Protestant scholastics affirmed divine affections, but went on to deal with a number of problems and possible misunderstandings of attributing these to God. Muller enumerates them. All of this is on page 554 and following of volume 3 of his Post-Reformation Reformed Dogmatics.

¹That’s a phrase from Kevin Vanhoozer, Remythologizing Theology, 399. By the way, the treatise on divine impassibility at the end of Vanhoozer’s book goes a long way toward justifying its pricey price. It doesn’t start until page 387, and a lot has happened by then, but if you hang with it until then, it really delivers. All I’m saying is buy that book and don’t forget there’s a 100-page treatise on God and emotion at the end.