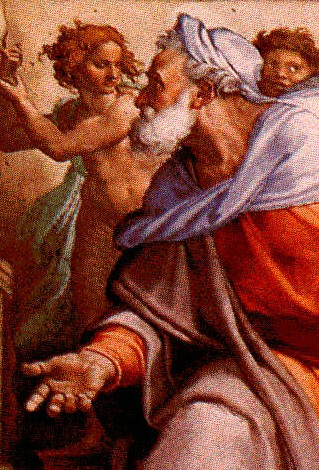 Scottish pastor/theologian Patrick Fairbairn (1805 – 1874) wrote an interesting discursive commentary on Ezekiel called Ezekiel and the Book of his Prophecy: An Exposition (4th ed, 1876) that I’ve peeked into a bit recently.

Fairbairn’s comments on the prophet’s own personality are interesting. When I was first getting to know the Bible, I had the impression that Ezekiel was a man who wasn’t especially gifted at understanding abstract argumentation and merely verbal explanations, which is why God showed him lots of pictures and required him to act out a lot of things. But closer reading of the book of Ezekiel shows him doing some pretty careful reasoning and wordplay. So I’ve had to think harder about the right way to characterize what’s unique about Ezekiel’s personality and authorial style.

Reading for the author’s characteristic style: do I need to say “the human author” just because my theology of biblical inspiration includes the presence of a divine author? It seems to me that this is a very important reading technique, and I labor to find ways of doing it well without reducing or explaining away the fact that God himself is speaking in these human words in Ezekiel’s tone of voice.

In his introduction, Fairbairn tries hard to build the same skills and make the same distinctions:

For, as another distinctive peculiarity in Ezekiel, there appears a very marked individuality in his cast of mind such as gives a kind of uniqueness to his writings, and plainly distinguishes them as productions from those of the other prophets.

First he has some general remarks about whether it’s reasonable to inquire into the human personality of a prophet, and about the notion of inspiration presupposed by such inquiries:

It is true that in the one as well as in the other we have the inspired utterances of men speaking as they were moved by the Holy Ghost. But it is not the less true, that in thus moving them, the Spirit of God had respect to their diverse natural characteristics, and allowed their constitutional peculiarities to give their full impress to the form and method of the messages they delivered. The doctrine of inspiration does not imply, however often it has been so represented, that the persons who were the subjects of it should be wrought upon by the Spirit as a kind of mechanical instruments, whose natural faculties were suspended under the violent and impulsive agency of a higher power. On such a supposition, we could never account for the diversities of manner which characterize the sacred oracles, and which not only shed over them the charm of an instructive and pleasing variety, but also endow them with a manifold adaptation to the different tastes and capacities of men.

Fairbairn draws consequences from the fact that God has worked this way in inspiration:

The Spirit did not suspend, or imperiously control, but most wisely and skilfully used the mental peculiarities and individual relations of his human instruments of working. And as through the employment of these the Divine Author of the communications has sought to find his way more thoroughly to our under standings and our sympathies, so it is by making due account of the same that we must endeavor to find our way to what, in the communications themselves, may be the mind of the Spirit.

All of which sets him up to offer this characterization of the prophet:

In the prophet Ezekiel we have an example of the Spirit s theopneustic agency in one of the more uncommon and eccentric class of minds, a mind susceptible of deep emotions, possessed of an aerial fancy, and intensely energetic in its aims and movements; a mind, therefore, strongly realistic in its tendencies, so that it must be ever striving after the living presence or the life-like representation of things, beholding the unseen mirrored in the seen, and arraying the dim perspective of the future in the familiar furniture of the past or present.

To such a mind, the distinctions, in a manner, vanish between history and prophecy, symbol and reality, flesh and spirit ; the one seems insensibly to merge into the other, or to be related to it only as the exterior form of the life that dwells within. And the Spirit of God, in serving Himself of such a mind, as a channel of Divine communications to the Church, must be understood to have left these marked peculiarities to their native operation, and only to have given them the proper impulse, and furnished them with the necessary materials of working.

It was, in truth, precisely such a mind that was needed in the crisis at which the affairs of the covenant-people had then arrived, when, the external framework of the Divine kingdom having fallen to pieces, the interest of God seemed ready to perish, and the very foundations of the faith were tottering to their base. No ordinary man, at such a time, was fitted anew to raise the standard of God s truth, and rally the prostrate forces of the kingdom.

One was needed who should be capable of living alike in the past and the future, and who could see as with open eye, and grasp as with a giant’s hand, the hidden realities of faith. If we should expect to find there, as in some of the other prophets, fine displays of tender feeling, or descriptions remarkable for their flow of pleasing sentiment and artistic beauty of composition, we shall certainly be disappointed. This is not the field for gems of such a nature.

Whatever might serve this purpose, whether in the real or ideal world, in the symbols of religion or in the facts of sacred history, he freely lays under contribution to effect it. Even strange combinations and grotesque forms are often resorted to, when by means of them he can add to the graphic power and moral force of his delineations.

And comparatively regardless of the mode, intent mainly on the effect of his communications, he indulges in frequent reiterations, and invests his imagery with such specific and minute details as one naturally connects with a felt and present reality. in Ezekiel alone of the later prophets does the priestly element become so peculiarly prominent and pervading as to give a tone and impress to the general character of his ministrations, and to render ever his prophetical labours a kind of priestly service. His thoughts seem perpetually to linger about the temple, and even delight to find in its symbolical materials and forms of worship the channels through which to unfold the truths he was commissioned to declare.

I don’t know enough about Fairbairn’s doctrine of scripture to know how committed he is to verbal, plenary inspiration. He certainly believes in supernatural, predictive prophecy. And he also holds back from thinking that cultivating literary insight puts him in the position of being a literary critic who can pronounce critical judgments on biblical style. He cites the comments of Ewald, who crossed the line by saying that Ezekiel the writer was such a poor stylist that he interfered with Ezekiel the prophet. Ewald:

Prophecy has its root in quite other soil ; and were it after this fashion drawn into the mere province of art, it should cease to be genuine prophecy, and should belong to the class of degenerate productions spurious imitations of the true.

Fairbairn refuses to bring such a condemning judgment on Ezekiel’s literary style. He is after something else; a deeper understanding of what God has said through a deeper understanding of how God has said it, through a grasp of the word of the Lord as delivered through “a mind susceptible of deep emotions, possessed of an aerial fancy, and intensely energetic in its aims and movements.”