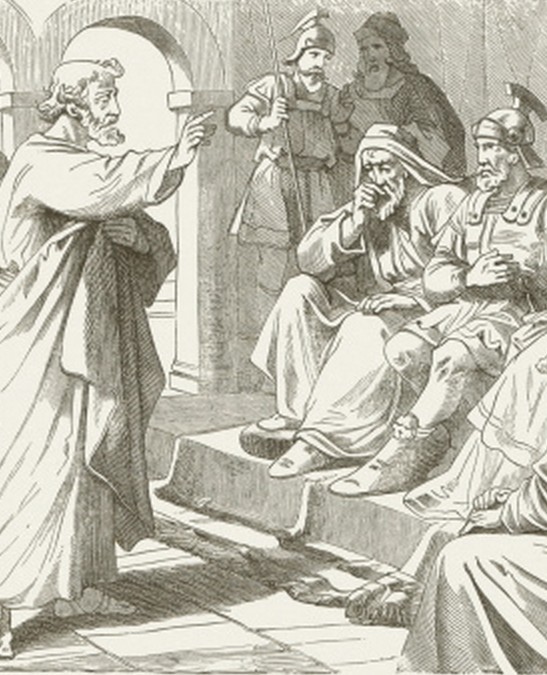 Though I wouldn’t want to change its name, the Book of Acts is really a Book of Words, and a Book of Speeches to be more precise. The reason, as G.H.R. Horsley has pointed out, is that “the Preaching is itself the subject of Acts,” that is, Luke was not just telling the story of what happened in the early church, of but of what they preached. In 1:8 Jesus tells the apostles that they will be empowered to be his witnesses to the ends of the earth, and the steady stream of speeches confirms that it happened just as he said.

If you imagine Luke outlining the book, you can see him dropping the big blocks of text into place as set pieces, and then narrating around them. As a reader, asking yourself “when’s the next speech?” is not a bad strategy.

But here’s the weirdest thing about the speeches in Acts: most of them are interrupted. It’s pretty rare for anybody to bring their speech to an actual conclusion. The interruptions are various: Peter and John get arrested (ch. 4), Stephen is killed (ch. 7), Peter sees his Gentile audience filled with the Holy Spirit and speaking in tongues (ch. 10), Paul mentions the resurrection to the Athenians and gets mocked (ch. 17), mentions his Gentile mission at the temple and gets mobbed (ch. 22), and is cut off by both Felix and Festus (ch. 24 and 26). In each case, Luke narrates the reactions.

Why are so many of the speeches in Acts interrupted? Dibelius proposed that Luke used this narrative technique to draw attention to the important things said just before the interruption, so that the last words are emphasized by the dramatic reaction. That seems to fit some of the cases, but not all. Horsley pointed out that this is a great way to give the impression that lots of long speeches are happening, without having to actually record all of them (not everyone can go on for 50 verses like Stephen did). One of the cumulative effects of a lot of interrupted speeches is the sense that the apostles had a lot more to say.

But there are deeper reasons for this odd phenomenon of interrupted speeches, and in a recent article, Joshua Garroway (a rabbi and associate professor at the Los Angeles Hebrew Union College) put his finger on one of them (“Apostolic Irresistibility’ and the Interrupted Speeches in Acts,” Catholic Biblical Quarterly 74 (2012)).

Garroway points out that at the end of Luke (21:12-15), Jesus assures his disciples with these words: “I will give you a mouth and a wisdom that all those arrayed against you will be powerless to withstand or contradict.” In other words, says Garroway, “Jesus assures the apostles not merely that they will have something to say, but that their inspired words will be nothing short of irrefragable.” And in Acts, we see that they are.

Except that the apostles did in fact face opposition that seemed to withstand and contradict them at least temporarily, and the message struggled to make its way forward. It had remarkable success, but it also hit obstacles that it had to find other ways around. Luke had to report both phenomena, and find a way to “reconcile apostolic irresistibility with apostolic failure.” There is a real tension here, and Garroway’s suggestion helps toward a more insightful reading of Acts.

He also applies his analysis to my favorite interrupted speech in Acts, the speech of Peter in the house of the Gentile Cornelius, which is interrupted by the Holy Spirit. Instead of just shrugging it off as an exception, he points out another, “complementary” implication of Luke’s use of interruptions: “Not only do [the interrupted speeches] protect the principle of apostolic irresistibility in the face of limited apostolic success; they also forestall the reportage of rejoinders, the opposing speeches that might be expected by readers particularly in deliberative or judicial settings.”

The intrusion of the Holy Spirit just after Peter mentions forgiveness of sins in the name of Jesus may have stopped the “believers from among the circumcised” who were also there from voicing their disagreement. After all, Peter had received a private vision and was now following divine guidance as to its full meaning. The implications would be worked out in due course in a deliberative setting: the council meeting with James in Jerusalem in Acts 15. But here, a counter-argument would have crippled the advance of the gospel into the Gentile world. So the Spirit steps in.

Since the issue of gentile inclusion had not been broached before, one imagines that at least some of his companions might have balked at his insistence that “God is not partial, but anyone from any nation who fears God and acts righteously is acceptable to God.” Peter’s bold action and pronouncement were bound to be challenged. Indeed, Luke hints at the presence of such objections during Peter’s delivery of the speech. After the Holy Spirit interrupts the speech and stuns the Jewish observers by enabling gentiles to speak in tongues, Peter asks whether “anyone can hold back the water for these people to be baptized” (10:47). Peter’s rhetorical question implies that some of his companions were resisting his bold proclamation prior to the intervention of the Holy Spirit. It suggests, albeit retrospectively, some measure of bickering in Peter’s camp regarding his overtures to Comelius, as only a miraculous intervention secures acquiescence from everyone. Such universal consent makes the presentation of a rejoinder unnecessary.

I find Garroway’s explanation illuminating. And since I’m not sure how to end this blog post, so I wish I could make use of the same technique for different ends, and